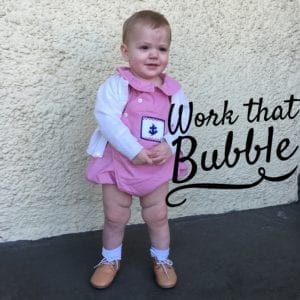 Before I had my last baby, a boy, I SWORE I would never dress him in bubbles, sunsuits, anything smocked or knee socks. Here I sit, over a year later not only eating my words but choking on them. This change happened slowly. As a baby, he wore cute footie outfits in the cold. As the weather got warmer, he would wear onesies with seersucker pants or shorts and the occasional pair of overalls. Then as I was scrolling through Instagram one night, I found my gateway drug: seersucker bubbles with a monogram. It wasn’t too much but still maintained some boyish charm to it. Then came the plaid, peter pan collar, monogrammed bubbles. Before I knew it, almost all of his clothes were bubbles and had monograms. These outfits were perfect for summer. He looked cute, just like a baby should. It was then that it hit me: I had no desire to dress him like a big boy. I wanted him to dress like a baby for as long as I could get away with it. There would be a lifetime of polos, jeans, and khaki pants ahead of him. But his season for bubbles and smocking was short. I wanted to take full advantage of it.

Since my son has turned one, my husband and parents (who are from NJ and just don’t get the appeal of smocking) have thrown me some serious shade. They’ve told me that he is a little boy, not a doll and since he is walking, I need to stop dressing him like a baby and dress him like a boy. Except, he is STILL a baby (to me). I had no plans to send him off to kindergarten is a smocked sailor suit. But I will dress him in those kinds of clothes until he is two. That gives me ten months before I have to move to separates. But I am not ready to even think about that yet.

My change in thinking came about gradually. With my older girls, I was able to find clothes for them at Target (or pretty much any big box store). Cute girl clothes are not hard to find at all. But boy clothes? Ugh. The selection at Target is awful. All the shirts have words on them (I loathe shirts with words on them) and all the pants are athletic. It’s just not my cup of tea. At Gap and Old Navy, all the clothes wanted my son to look like a “little man.” That’s ok on occasion but not every day. I do love Janie and Jack. My son (and daughters) have their fair share of clothing from this store. But when it just came down to it, I found that the type of clothing I wanted to dress my son in had to be cute, not make him look too old, and not have words on it. You know what fits that bill? Smocking. And bubbles. And pretty much everything from places like Smockingbirds and Remember Nguyen (my two favorites) and Banbury Cross.

I’ve even gone a bit overboard with the sweet, smocked outfits. Over December, I actually dressed my son in a different Christmas smocked outfit for 25 days. Thanksgiving brought a turkey smocked set where the shirt buttons into the bloomer. Of course, he wore it with knee socks and t-strap shoes. It was beyond adorable. My parents (and NJ family) thought it a tad ridiculous. He has smocked outfits with race cars, bugs, and dinosaurs. He even has a special political themed smocked Jon Jon. I dress him in it on big voting days during this presidential election cycle. My family can throw me all the side-eye glances they want. My son will rock a bubble and smocked clothes for now. He has the rest of his life to be a man. Why rush it?

Building My Village, One Member At A Time

The Loss of a Multiple {Pregnancy and Infant Loss Awareness Day}