I’m fortunate to have many fantastic friends with beautiful families, and a few of them are part of the new normal. What is the new normal you ask?

Growing up, I didn’t have any friends with gay parents so it’s not something that I experienced as a child. I’m thankful that my children are part of a new era where being gay is openly accepted. We continuously express to our children to just be happy with who they are, so it’s only natural to be accepting to everyone regardless of their sexual preferences. Or so it should be. 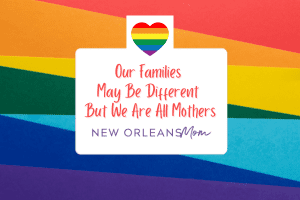 Since this is 2022 and my friends’ sexual orientation is no secret, I was rather taken by surprise at a recent birthday party. While her wife was talking to some parents from her daughter’s class, she walked up and introduced herself as her daughter’s mother. The shock in some of the parents’ eyes had me not only dumbfounded but also embarrassed.

Like I said, my friends have always been open so I was surprised to see that these parents didn’t know they were lesbians and was embarrassed by the look on their faces. I was so taken back and a bit defensive. Why the squinted eyes and their frigid stance? My friend and her wife are two of the most caring, encouraging and loving parents.

Their sexual orientation doesn’t make them any different from you or I. They are mothers.

While some of the moms of the class seemed to be puzzled by this, none of the kids seemed to care or notice that their friend has two moms. In fact, my sons have never asked or commented about the friends I have that are in gay relationships/marriages. They just see it for what it is: that their friends have two moms and/or that their classmate has two dads. They don’t make confused eyes or have a defensive demeanor.

The kids were open and accepting.

While I know that the question may arise, I’m fully up to answering any questions about it. It’s best to address it and be open. It shouldn’t be a secret. If you act uncomfortable, then your child/children will act the same. All families are different, right? Whether it’s skin tone, sexual orientation, occupations … the list can go on and on!

We are thankful to live in a day and age where openness and acceptance is encouraged.

Have your children noticed that families are different? If so, how have you handled it?

I Did It! {Reaching My Goals of Pumping For My Preemie}

Our Weekly Summer Plan to Cure Boredom While Staying on Routine