Before the bright blue “lava” had finished flowing from the papier-mâché volcano at my first baby’s over-the-top gender reveal party, I was already hearing things like:

“Oh, you’ll love it! Boys are so much easier than girls!”

“Boys are basically noise with dirt on it. They’re so fun!” 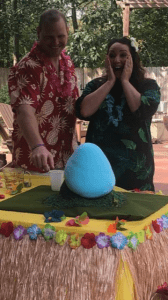 I was so very excited, but I was also unnervingly scared. Like any brand new mother-to-be, I was anxious about all the changes my impending motherhood would bring. But, as a self-professed girly girl who grew up with a girly girl sister, I was downright terrified by the prospect of being a mom to a little boy.

What was I even going to do with a little boy? I didn’t know the first thing about them.

But I just clung to the “Little boys just love their mommies” idea and felt like it would magically work itself out. After all, my all-time favorite movie is Jurassic Park – that’s got to count for something in the Little Boy Department, right?

Fast forward a year almost to the day and there we were entering lockdown with a chubby little angel-faced 7-month-old. My husband and I, like most of the rest of the world, found ourselves working from home. We juggled Zoom meetings while we watched our son hit milestone moments like sitting up and crawling. (I not-so-secretly loved my time in lockdown because of all the “firsts” it allowed me to be there to witness.)

Spending so much time together as our little family of three meant we developed some different routines than we’d had pre-COVID. For one, my husband was around a lot more than he’d been previously since his time spent coaching high school baseball was cut short. I truly relished having him home so much.

So did our son… who very clearly seemed to prefer his dad over me.

At first, I thought it was so sweet how his little face would light up and he’d scramble across the room to my husband. But then if I tried to read to him at bedtime, he’d throw a fit until his dad took over.

So began the worrying. It wasn’t like a “How come I’m not the favorite?!” worry, it was more like “Where’s this whole ‘Little boys love their mommies’ thing I was promised?!”

There was no jealousy, only anxiety. I felt like those fears I’d had when I was pregnant were coming true: Maybe I just wasn’t cut out to be a boy mom, maybe we just wouldn’t have that kind of connection so many mommies and sons do.

I mean, I loved this little person more than life itself – how could that *not* be enough to forge that kind of bond I so desperately wanted?

Turns out, it WAS enough. I just needed to give it more time. (And probably less worry.)

I don’t really know when it started changing, but at two and a half years into motherhood, I am definitely feeling those “loving his mommy” vibes from my little dude.

It’s “Mommy, read books please!” at bedtime, and not being able to go to bed without giving me a kiss.

It’s the way he curls up next to me on the sofa without being asked to and sweetly says, “I snuggle wif Mommy.”

It’s the coy little way he pretends that he has a poopy diaper (even though it’s almost always not) when I get him out of bed in the morning just to get me to hold my nose and act silly.

It’s the feeling I get when I hear him tell his baby sister that “Steg-a-sores is Mommy’s favorite dine-a-saw” whenever he is showing her his toy dinosaurs. (And how he’s assigned her “Brontosaurus” as her favorite.)

It’s how I can now point out upwards of ten different construction vehicles and find myself taking pictures of them when he’s not with me just to show him later. 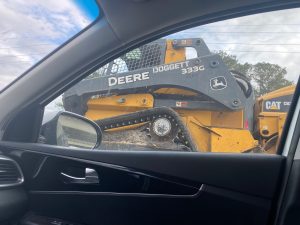 It’s how even in his most terrible-twos, tantrum-y moments, he still wants to be near me because I’m his safest space.

It’s how the pinch of a tiny finger feels like his whole world is collapsing on him, but all is made right when he asks, “Mommy, kiss it?” and I oblige.

It’s hearing him tell his baby sister “Let’s just take a little rest, ok?” when she’s cranky and in need of a nap, just like I’ve said to him a thousand times before. And how he tickles her toes when she gets in her bed.

It’s the sound of his light-up dinosaur shoes on the daycare floor as he rushes to tightly hug my leg at the end of the day, excitedly squealing “Mommy finish work!”

It’s the weight of feeling that little body, the one that once barely filled the crook of my arm, as it spills across my whole self as I rock him before bed.

It’s hearing “I lub you, Mommy” as I shut the door behind me.

It’s knowing that he will never be this little again, that’s it not all that far in the future when he won’t want to snuggle or rock or light up when he sees me.

It’s realizing that my days of giving mommy kisses that heal all are numbered.

I know that my son loves me as much as his little heart can hold. I have “conquered” my fear that I’m not meant to be a boy mom – if for no other reason than I’ve realized I am meant to be HIS mom.

But there are definitely still things about being a boy mom that I struggle with.

Like the throwing. Little boys throw EVERYTHING. Toys, food, clothing, tantrums. I don’t know if it’s the act of throwing that he enjoys – or that he knows it pushes my buttons – or both. But the kid loves to throw.

Many an experienced boy mom has told me that little boys break everything and to get used to not having nice things for the next 18 years or so. I have a hard time with that sometimes, maybe because I’m a girly girl and I like pretty (often delicate) things. My interior design tastes have been no match for the brute strength of a toddler exploring his boundaries.

I have spent a small fortune on Plexiglas inserts for every picture frame in the house and keep Quakehold earthquake preparedness putty in business. The majority of our furniture is secondhand that we’ve refinished so that it’s not a complete disaster if it gets destroyed. But I know I can’t prevent every accident.

I know my experience is just that: *my* experience. But I hope that it can bring a little comfort to another mom who may feel a little out of her element in her role as a boy mom (or even a girl mom). I know that all that worrying I did in those earlier days of motherhood wasn’t abnormal, but I definitely wish I hadn’t stressed so much about something that literally happened so naturally I practically missed it. It’s like so many other things in parenthood – so beyond our control, it’s almost comical. Maybe the key to surviving it is in finding the humor.

Were you worried about becoming a boy mom/girl mom?