Let me begin by making the reader aware that I have approached this topic from two very different points of view: first, as a working mom of one child and, more recently, as a work-from-home/stay-at-home mom of two babies under 3. Even though I work from home, I honestly get NOTHING done (work related) when the kids are at home. Nothing. So I send them to daycare 3 days a week. Mark, my oldest, is two and a half, and he has been in a daycare/school since he was 3 months old. Jack, my youngest, is one, and has been in daycare since he was 4 months old. The difference is that when Jack started daycare, I had switched from full-time work to part-time and from home.

When I worked full-time, coordinating a sick child was a quite frankly a nightmare. 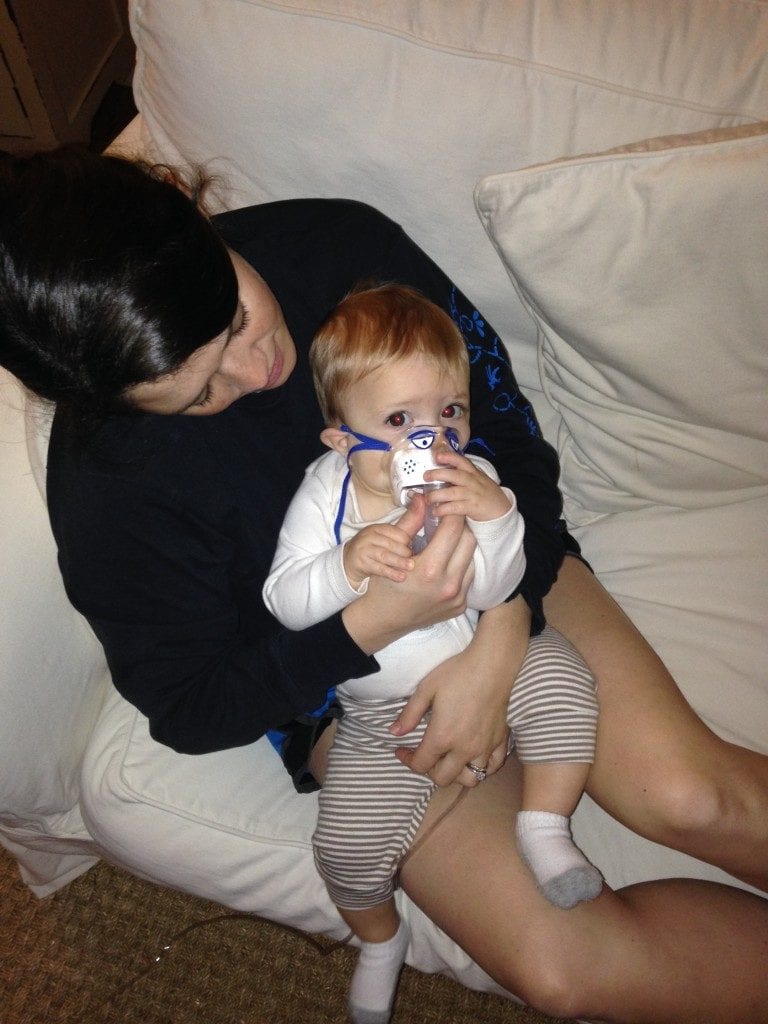 I worked full-time as an attorney at a middle-large law firm, and my husband was in his internal medicine residency. To say we worked a lot is an understatement. That continued when I returned from maternity leave. Predictably, Mark got sick in his first week of daycare. As a matter of fact, he was often sick during the fall and winter until after his second birthday. On those days, I stayed home and *tried* to work from home. I am not fortunate enough to have retired local grandparents for my children. My parents still work and so asking them to help in emergencies meant asking them to take off of work. Not to say we didn’t call in such favors, but they raised their children and there are only so many times you can ask such a thing of others.

There were also times when I had to bring Mark to work with me. As you can imagine, THAT was a disaster. I definitely kept him out of school A LOT those first two years. My husband may have stayed home once or twice with him. There are careers where it is just not possible to call in sick. Medicine is one of them, and I would argue that the nature of the judicial system makes it just as difficult at times. But because my husband could not call in sick to work (I mean, people need their doctors), the brunt of it fell into my lap. I am sure my bosses were less than thrilled. If Mark genuinely felt bad, I did not send him to school. If he had a highly contagious illness such as pink eye, he stayed home. But I have to be honest and admit that there were times I sent him to school when he did not have a 100% bill of health.

In case you are seriously judging me, let me take a moment to defend myself and explain that if my child was ill (i.e. vomiting, diarrhea, high fever, etc.), we kept him home. I also bring my children to the doctor when it is necessary. But if he had a 100.3 fever (which is NOT a fever by the way), and no other symptoms or only accompanied by a slight runny nose, he was going to school. The school said anything over 100 degrees was a fever. Ahem, not according to any reputable pediatrician. If my pediatrician cleared him to return to school even though he still had a runny nose, he was going.

Of course, I wished I could’ve kept him home with me. But it is not always so black and white when both parents have to work. Employers are not always understanding. And I never thought that my career was more important than anyone else’s child’s health. Such an argument presumes much and lacks merit. I do not believe parent’s are malicious in that way. May I also point out that if your daycare bound child is sick, chances are he caught it from school before any parent was none the wiser that their child was sick until every child was contaminated. I urge parents to use their best judgment. I neither condone nor recommend sending a highly contagious child or one with a serious illness to daycare with a dose of Tylenol to mask the fever and symptoms. But a lot of times the child is just slightly under the weather, and I believe some daycares overreact regarding illness. I know that there were instances where I was not made aware of his symptoms at their onset. Therefore, within the petri dishes that are daycares, the germs had been sufficiently spread between each and every child in the room. And maybe even those down the hall. By the time your child presents with the latest virus making its way through the classroom, it is safe to say every child has been exposed. I ascribe to the philosophy that germs (to a degree) are a good thing and every cold/virus is building/strengthening my children’s immune system. Kids are not particularly sanitary individuals, and they tend to over share all the things; germs are no exception. I guess you can call me a germophile.

Scaling back my career has lessened the stress associated with a sick child.

I mean that in terms of the upset it causes to a parent’s career. I also am aware that I am blessed to be able to make that choice. It was not an easy one to make, and it is by no means right for every family, but it was my choice and right for us. Now that I do have the luxury of working from home, I can keep them home when they are sick, and it does not cause nearly the same disruption. My kids have never suffered from a scary life-threatening illness. I know that if they had, my perspective would be different. I do not suggest sending a child to school with a diagnosed, highly-contagious illness. All I am saying is that if during cold and flu season my kid has a low-grade fever and the doctor says it is just a virus, assuming my kid is feeling up for it, he is going to school. At least he did when I was working full-time. Regardless, my decision to work out of the home has virtually eliminated the issues that arise from having a sick child and balancing mom and dad’s jobs. I know I am infinitely blessed in that regard. I can and do keep them home more often now. But this is not an option for every family. And I certainly can sympathize with the families where both parents work outside of the home.

So what is the alternative?

As I mentioned before, I maxed out my sick days (to the extent any existed), and I had to rely on my parents on occasion. But sometimes, there are no viable options. A lot of 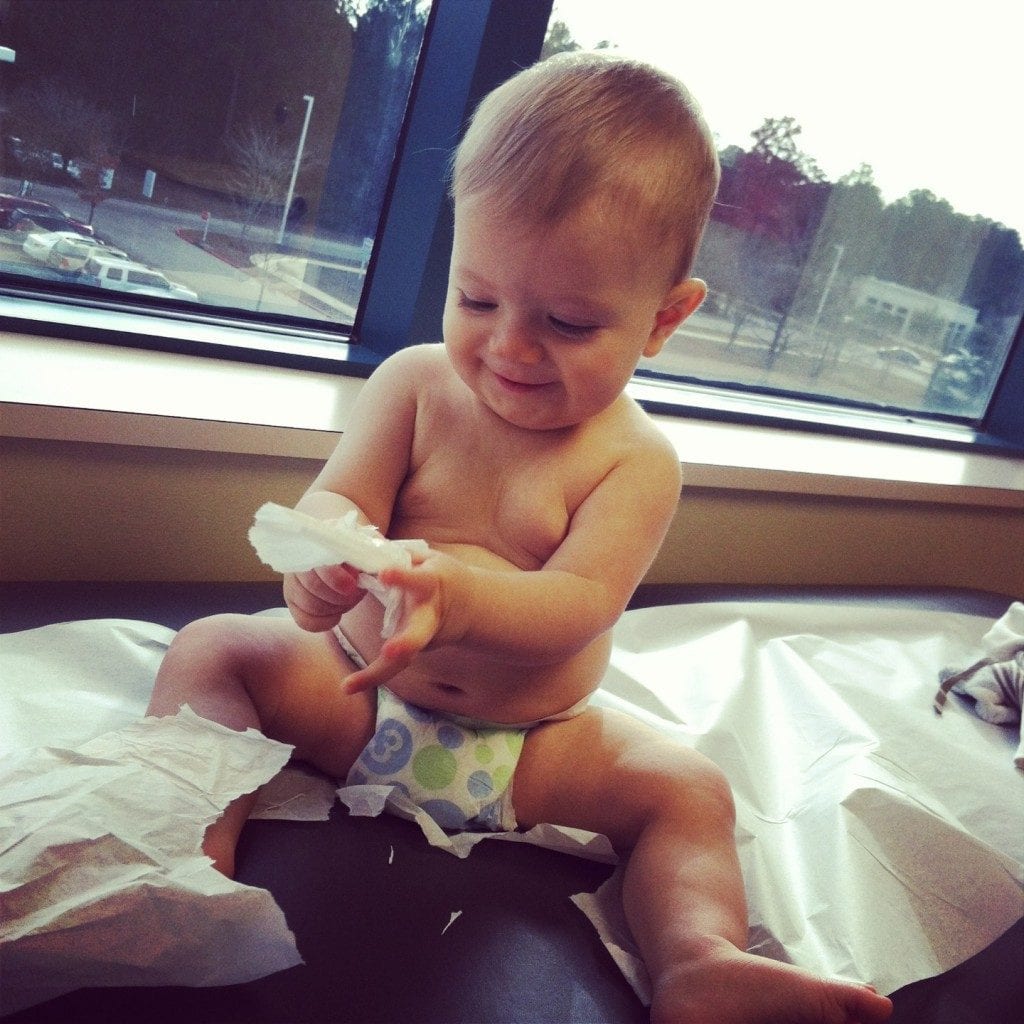 sitters are in school or have other jobs and have obligations during the work day. How many people keep a nanny on retainer or have the means to do so? Other options are not affordable when you have already paid for the childcare that you cannot use because your child is sick. It is universally accepted that kids get sick at daycare. Sure, if you know your baby is highly contagious, keep them home. And the younger the baby, the more important that is.

That said, I do not fault parents for sending their children to school when they have a slight fever and/or cold. We do what we have to do. If your kid is in daycare, they are going to get sick, and they are going to get sick often. Accept it. If that is not something you are prepared for either by way of having to sacrifice work, or because it just gets under your skin that another parent would send their sick kid to school because they have no alternatives, then find another option for your family. Such as a nanny that comes to your home, switching to a more flexible job, or calling a sitter. Not an option? Then have some sympathy for your fellow moms who are inherently just like you and doing the best they can.

Nurse Nikki, of Nurse Nikki Nola, offers some guidelines for making the decision to keep a sick child home:

1. Does my child’s illness keep him/her from comfortably taking part in activities?

2. Does my sick child need more care than the staff can give without affecting the health and safety of other children?

3. Can the other children get sick from being near my child?

Do you think a child with any sign of illness, however slight, should stay home? Is there one answer?

How to Keep the Romance Alive on a School Night