I’m 39 now, but many moons ago, I was one of those people who was abnormally excited to turn 30.

I’d thought, like many people, that my twenties would be a decade of adventures with the love of my life, buying houses, and having babies. Those ideas didn’t seem unreasonable; I’d watched nearly all of my girlfriends meet their matches and travel down that road. But at 29, I was very single and admittedly felt very behind.

If I’m being completely honest, it was one of the toughest times of my life. I genuinely celebrated all my friends as they got engaged and married and pregnant, but the weight of wondering when it would happen for me was heavy. I often wondered if there was something wrong with me, if there was some explanation as to why I was alone and longing to share my life with the right person. (Spoiler Alert: There wasn’t!)

As my thirties rapidly approached, I made a conscious shift in my thinking: Instead of feeling “old” and like I was leaving behind the most fun decade of my life, I decided to focus on the idea that my thirties could be my best decade.

I believed that my thirties would bring me the things I’d hoped to have had in my twenties. (Spoiler Alert: They did!)

I welcomed my thirties in probably the best way possible: with a surprise party surrounded by friends and family where a video was played of all of my loved ones sharing what I meant to them. Though some of the faces may have changed, that video is still one of the greatest gifts I’ve ever received. My thirties were off to a wonderful start.

We were engaged a year and a half later and married a year after that. At almost 36, I knew we probably didn’t have a whole lot of time before we needed to begin trying to start our family. It took just under a year for our first positive pregnancy test, and that little life-changing line came into this world as a perfect baby boy just a few weeks after I turned 37. 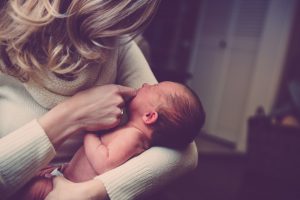 Because I was 35 when we started our fertility journey, I was exactly the age the obstetrical world considers to be “advanced maternal age” (AMA). Once I was pregnant, there was certainly no shortage of stickers emblazoned with AMA plastered on my chart’s file folder. And nothing has a way of taking the wind out of your sails quite like the term “geriatric pregnancy.” Oof. I often joked that I was “having a Benjamin Button baby” whenever it was mentioned.

Early on in our process to start a family, I had a full workup to make sure there weren’t any issues we’d need to know about. Because of my age, my doctor told me I’d only need six months of unsuccessful trying before she’d intervene instead of the requisite twelve. Thankfully, the tests showed there wasn’t anything for us to be concerned about.

Aside from financial stability and being more established in a career, people don’t often talk about the wonderful things that come along with becoming a mother at an older age. For one, I appreciated the fact that there were lots of ultrasounds to make sure everything looked good. I was offered genetic testing, a simple blood draw that would point out any chromosomal abnormalities (as a bonus, this test is also how we found out the sex of both our babies). And because of my age, a lot of this was covered by my insurance.

The extra medical care is a definite plus, but I personally feel that the best part of becoming a mother later is that I am simply better suited to it now.

I think a lot of it stems from watching all my friends join the ranks of motherhood first and sort of having a clearer idea of what to expect. Case in point: I definitely felt less pressure to successfully breastfeed after watching so many of my close friends struggle to do so.

But part of it is just because I am different. My experiences — the happy ones, the devastating ones, and every one in between — have all shaped me in very fundamental ways. I’m still very Type A, but I’ve mellowed a lot from how I was in my twenties and early thirties. I still worry and stress about things, but I’m also much more capable of handling life’s stressors. Most of all, I care a lot less about what other people think and I am much more comfortable doing what makes me happy and what feels right.

Like many couples who’ve gotten off to a later start in having children, my husband and I knew we didn’t have much time to waste if we wanted a second child. We started trying shortly before our son turned one. Our sweet little pandemic baby arrived 19 months after her brother.

Having a baby and a toddler is definitely not for the faint of heart. We are pulled in a million directions and fall into bed spent by 9:00 most nights. But seeing our toddler run to kiss his sister before heading upstairs for bedtime and seeing our infant just light up when she sees her brother enter a room makes the exhaustion seem not so… exhausting.

Our 2-under-2 life is pretty wild at times, but it wasn’t all that hard to adjust to. It’s basically like extending each of the baby stages a little longer. Time definitely seems to be flying faster with this second one, maybe because we know the ropes a little better and things are just going smoother. Or maybe it’s just because we are too busy to notice!

The Calm AFTER the Storm

I am a very anxious person. I’m a planner and love to make lists and contingency plans. Motherhood definitely threw my anxiety into high gear — and postpartum anxiety after my first baby shifted it even higher. (Thank goodness for talk therapy and medication.) But as anxious as I am overall, there is still a very strong sense of calm most days. (“Calm” here refers more to a sense of having things together rather than to peace and quiet because of TWO BABIES.)

No doubt part of that is due to a husband who makes being laidback seem like an art form. He’s a fabulous partner and is most definitely the calm to my crazy. I could not manage a fraction of this wild 2-under-2 life without him.

But I think a significant part is also what I’d mentioned earlier:

I am just different.

Here’s a great example: I love Pinterest and I use it all the time. I enjoy designing picturesque themed nurseries for my babies and throwing over-the-top detailed parties. And I’m usually pretty good about pulling them off. But I know my limitations now MUCH BETTER than I did even just a few years ago. Twenty-something Joey would’ve been beyond stressed out when her Pinterest project failed, but almost 40 Joey (mostly) laughs it off and moves onto the next.

Knowing my limitations and accepting less than perfect was a hard pill to swallow as a new mom. And I definitely still struggle with it some days. It’s hard when you’re trying to balance it all. But I know that I am so much better equipped to handle things as who I am today than who I used to be in my younger years.

Overall, getting a later start in growing my family has been amazing. I’m blessed with a husband who’s my perfect match and two beautiful, happy and healthy babies who are my whole world.

My life may be busy and sometimes even chaotic, but it was very, very much worth the wait.

Did you get a later start in motherhood than you’d planned? How’s your experience been?

Having the Hard Conversation :: Discussing Final Wishes with Your Loved...