A Note from the Author: I would like to acknowledge that, in the grand scheme of things, our family has been far luckier than so many others during this pandemic. I do understand that a party is a frivolity in comparison to the larger issues in our world today.

“He’s so little, he won’t even remember! Parties when they’re this young are for you, anyway.”

That was the general sentiment I heard whenever I lamented how Covid had prevented my almost 2 and a half year old son from having a proper birthday party.

A few days ago, my mom picked up a king cake at a local bakery and also got a slice of layer cake while she was there. When my son saw the slice of cake, he immediately started singing “Happy birthday to youuuu, Reed” (the guest of honor at the birthday party we’d attended a month before). I giggled when he made that association, but I wasn’t at all surprised since he calls all cakes “happy birthday to you cake.”

I know that very few experiences from this age will stay with my son as memories, but I also know that my little guy is understanding more and more everyday. And he’s also becoming a little birthday party-obsessed. He gets that from his mama. 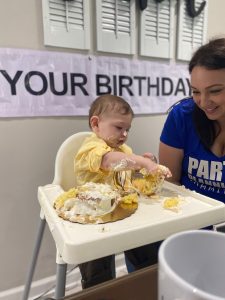 I’d planned an elaborate first birthday party based on “The Office,” complete with invitations that looked like memos in mini manila folders and a smash cake that looked like a World’s Best Boss mug. (While the show is definitely a favorite of ours, he has loved to dance along to the theme song since he was in utero.) Covid saw to it that his first birthday party became a smash cake-only Zoom session. (His first birthday wasn’t at all what I’d planned, but at least we were in good company.) For his second birthday, he was super into Moana, so I went all out with a Maui-themed party. But a Covid spike the week leading up to the party made us postpone indefinitely. I was heartbroken as I packed away the orange and green decorations.

He became a big brother last March at the ripe old age of 19 months – meaning his little sister’s first birthday is quickly approaching. And there was a part of my mama heart that hurt a little at the thought that she might have a birthday party before he would. Maybe it’s silly, but I wanted him to have a moment that was all for him.

Enter the Half Birthday Party.

I certainly didn’t invent this idea, but I definitely threw my best party-planning skills at it. I assessed what I had and made plans from there. My Maui-loving dude had transitioned to dinosaur-loving, so it was pretty easy to repurpose those orange and green decorations. I’d ordered a giant “2” mylar balloon, so I searched for smaller numbers to get a “1” and a “2” as well. I ordered some dinosaur-themed invitations and a few other things, like favor tags and thank you cards. 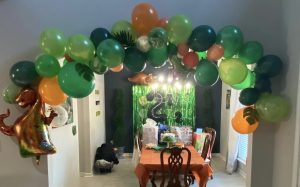 I decided the menu would be a taco bar, so I tapped into my best freezer taco recipes to start building the buffet. A fellow New Orleans Mom contributor is amazingly talented when it comes to cake decorating, so she knocked my “simple” dinosaur cake out of the park! Her edible dinosaur cake toppers were absolutely adorable. With the decorations, menu, and cake taken care of, the party was complete. 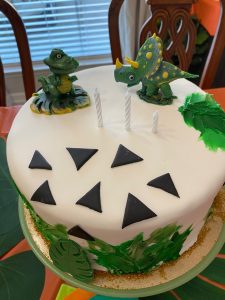 Since we’d bought our home only days before our son was born, we never really had time to host a formal housewarming party. And then lockdown started. So this party was really the first event we were hosting in our home. It was quite the undertaking to ready a house for a party with a husband who works long hours coaching basketball while I work full-time and also care for two very active, very young children. But… somehow we managed!

Finally, the day of the party came and my son was over the flippin’ moon! He loved seeing our family (so many he’s mainly seen on FaceTime) and he was beside himself that there was a literal buffet within easy reach of his tiny fingers. The lemonade flowed like champagne and he was partying non-stop. Each gift was opened with an excited “Look at dis, Mommy!” and he loved showing off his light-up T-Rex sneakers.

But nothing, and I mean nothing, compared to the moment when he stood before his dinosaur cake with its two and a half candles burning and saw everyone gathered around to sing to him.

After two and a half long years, I finally got to see my baby as the birthday boy surrounded by his loved ones as they celebrated him.

I’m getting teary just remembering it. It was the most amazing feeling to have something so “normal” once again – but also for the very first time.

Will he remember this party a month or even a week from now? I don’t know. So, in that regard, maybe the party was more for me.

But I know he woke up the next day telling me “I love my dinosaur party, Mommy!” And you know what? That’s for me, too. I would do it all over again to see his little face light up like that. 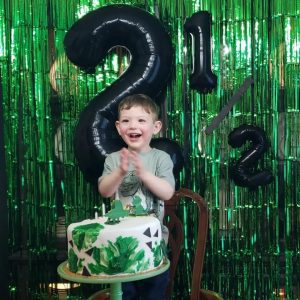 And I will… in another 6 months.

What “different” ways have you celebrated birthdays during this pandemic? 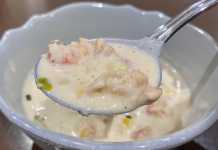 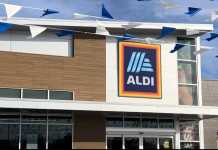