There’s a lot to miss during the various phases of COVID Quarantine. Dinners out, going to the movies, fun outings, and the list goes on. But I haven’t met one person who hasn’t mourned the loss of beauty treatments – namely, haircuts. For us long-haired ladies, it can be a bit easier to just throw our split ends into a messy bun – I mean, where are we really going anyway, right?! (Although I know, the root rot is real, y’all). But for the gentlemen in our lives who are accustomed to their monthly shape up, they can get REALLY shaggy, REALLY quickly.

Hey, babe…do you think you can cut my hair?

Wait, WHAT?! I had my boys’ hair cut right at the start of quarantine, and my husband had his done around the same time. But six weeks later, he was in trouble! On a family group chat, my cousin said her son’s hair had gotten so long and shaggy, he BEGGED her to cut it. She did pretty well and is admittedly not super crafty, so I figured if she could do it, I could figure it out. Worst case scenario…there were hats, and I could take the blame! So, I went shopping in search of some clippers. Amazon was pretty much sold out, and it quickly became clear that I wasn’t the first one to venture into home haircut territory. I managed to find a pair at Target, so I sat down with a glass of wine and Youtube.

But…he’s going to have to go out in PUBLIC! To WORK!

My husband had more faith in me than my extended family did! But a few YouTube videos, some scissors, a spray bottle, and LOTS of prayers and courage later, we went outside to get started. I always remembered what the barbers and beauticians I’d been to said: “I can always take off more, but I can’t put it back.” So I admittedly didn’t go too short the first go around. Buzz, blend, cut, lather, rinse, repeat. After all was said and done, it turned out pretty good! I cut one of my boys’ hair right after and it was not as successful. Sorry, honey.

So, do you think you could do that again? 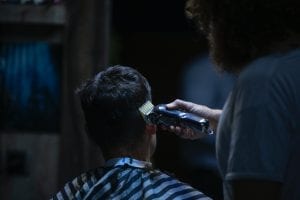 “You mean, like, recreate it and cut your hair again? Sure!” Anyone who’s met my husband knows he’s a saver. He’s a planner, incredibly financially responsible, and always thinking of ways to earn and save money. He’s very generous, but he’s also why we are where we are – because of his ability to save and plan! Both of our families predicted that once I cut his hair decently the first time, that I’d signed up for a lifetime of cutting his hair…and they were RIGHT! Now it’s a running joke that he’s saving about $1000 a year just by having me cut his and our boys’ hair. But he had to suck up the fact that I needed to invest in a few more supplies like a cape and hair duster. When in Rome, y’all. There were no complaints.

I’ve actually been having fun doing it, and have managed to only cut my hands about twice per cut (I looked like I’d been in a fight with a cat the first couple times!). I attribute my ability to good manual dexterity thanks to 30 years of playing the piano. That, and a TON of luck! That’s my story and I’m sticking to it.

But let’s get real – I know ONE haircut.

YouTube taught me ONE cut that I use on my husband and my twins, although all three of them have different hair textures and head shapes. Hey, it is what it is and you get what you pay for, right? I’m not crazy enough to take a set of clippers or scissors to a woman’s hair, or the hair of someone I didn’t marry or give birth to. They’re stuck with me, after all! And for the time being, my husband enjoys the savings and not having to work a haircut into his schedule, and the boys don’t know any different.

In short – if you think you can do it, just give it a try! Start slowly, be conservative, cut less than you think you need to, and take your time. Most guys have at least a vague knowledge of what number clipper guard their barber uses, so definitely start one or two higher just in case.

Don’t forget to have a couple of hats on hand too. You know, just in case. 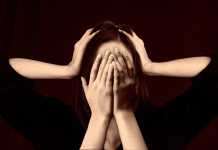 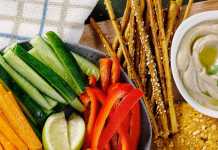