A few months ago, I was talking to my boss and we were discussing Thanksgiving. I mentioned that I was going to be spending it with family, which included my grandmother. Typically, people think of grandparents as being very elderly, frail, possibly even in a nursing home. But not MY grandmother. She’s still just as quick, classy, independent, and fabulous as ever, as the reigning matriarch of our family. We call her Honey – and with four children, seven grandchildren, and nine great-grandchildren, there is no shortage of her traits running around. She has a very active social life and a circle of great friends. After I’d briefly described her to my boss, she responded with a sentence I’ll never forget: “Wow, Laura. What a treasure.”

I thought to myself, “You know what? She IS a treasure. But to have her as healthy and present as she is–that’s the REAL treasure.”

I grew up with four grandparents, but two lived in Costa Rica so I didn’t see them very often. I lost my paternal grandfather at 10, and my paternal grandmother at 19. I have solid memories with my dad’s mom, as well as photos, sayings, and anecdotes that my father and I say to each other fairly regularly. I was there with her to celebrate her 80th birthday, with all of her grandchildren (she had 14, but two hadn’t been born yet), and one great-grandchild. I know that all of the grandchildren who grew up with her have wonderful memories. I lost my maternal grandfather at 15, and still think of him often. He had such a profound effect on not only our family, but the surrounding community, and his legacy continues to live on.

My mom grew up with all four of her grandparents, and I knew all but one, who passed before I was born. She and her sisters talk about Sunday meals with them, and the stories they would tell. My great-grandmother’s shrimp boulettes are LEGENDARY. I watched my mom and aunts grieve their losses when I was younger, not fully understanding it at such a young age. I lost my last great-grandparent (Honey’s father) when I was 20.  He was sweet, charming, genuine – and called every woman he met “Queen,” no matter their age.  Several years ago, I was talking about Honey with my husband, and he said “Laura – you need to be spending as much time with her as possible.”

I took it to heart.

I bring my boys down there to see her as often as I can – she lives about two hours away so it’s not always easy, with sports and the like, but we find ways to make it happen. We spend a weekend there every few months, and the last several years, she’s spent Christmas Eve and Christmas Day at our home. There is no shortage of family members and friends she could be with, so I’m extra proud that we can have her with us to celebrate. 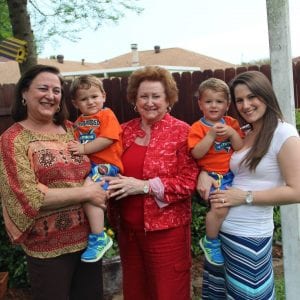 So it got me thinking about my kids and their grandparents.

My parents and my husband grew up having Sunday dinners with theirs and having them attend events and sports games. I didn’t – we grew up in another state with no family around. In many ways, my kids are the same way. Sure, we have family a lot closer than I did growing up (a couple of hours by car vs. a plane ride), but everyone has lives, jobs, and families. We do all we can to get together as often as possible – my parents come here every few months, and the same goes with my husband’s side (although COVID has put a damper on a lot of that!). But I have made a conscious effort to make sure my kids have solid memories with their grandparents. They are lucky to have all four, who are still healthy and independent.

We also talk about the times we spend together, both to hear how they remember them, and to remind them of things they may have missed.

We also make it a point to talk about the grandparents who are no longer with us.  It all started years ago, when one of my sons pointed to an old picture and said “That’s Rigo!” (that’s what they call my dad.)  It wasn’t – it was his father, with whom he shared a name (and clearly many features!), sitting with my maternal grandfather (appropriately nicknamed “Chief”.) That photo has followed me to every place I’ve lived for 20 years. But since he took an interest in the photo, we talked about the people in it. Their names, how they were related to us, and special memories we had with them. How Chief made the best gumbo around – I had to tell them that yes, it was better than mine! The times he took me to eat at Ruth’s Chris Steak House as a little girl, and how he’d always get me a special dessert on Sundays from his friend’s restaurant. We talked about how Tito (my paternal grandfather) lived in Costa Rica, had great hair, and talked with his hands – just like I do – and told me that I “smile with my whole face.” I always loved that, and took it as such a compliment.

I know how lucky I am to have had grandparents that I’ll always remember, and how lucky my kids are to have the same.

But it’s still important to keep the memories of those who are with us alive. Maybe one day, you’ll watch your child make a face that your grandmother made. Or you’ll see your niece say a phrase with the same inflection of your mother. If you have good memories with relatives, share them with your kids, and use them to build new family traditions.

And if they’re still here – treasure your grandparents! 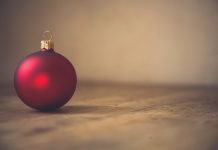