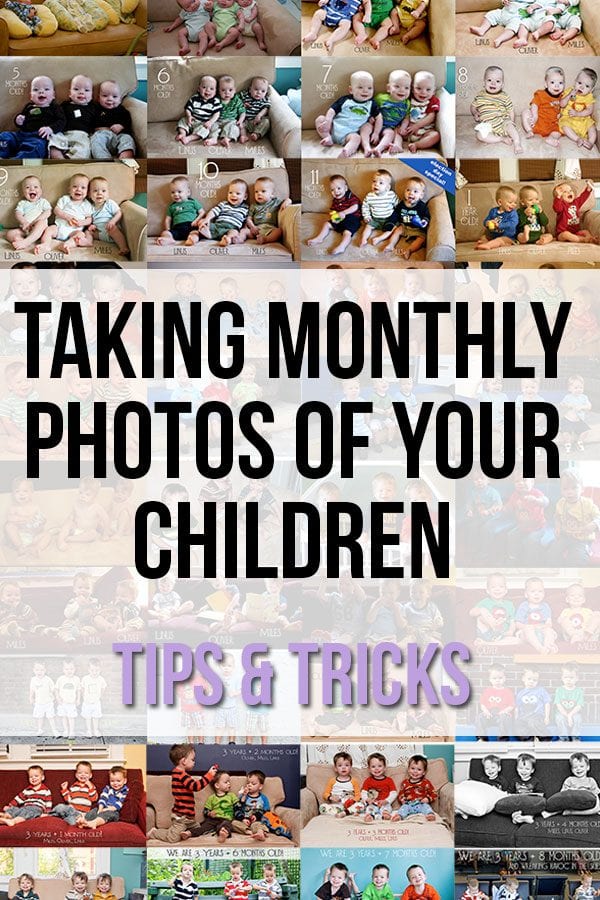 Ask any of my friends, and they’ll agree. I have a somewhat obsessive personality. Once I get into something, I tend to really get into it. Whether it’s a favorite band, beloved actor (I was probably the only 17 year old at my high school to have watched nearly every Jimmy Stewart movie ever made), or project, I am apt to take it far.

With photography, my nature has served me well. Not only did I take and post a photo every day for three straight years (2010, 2011, and 2012), but since my boys were one month old, on the fourth of every month (since their birthday is December 4), I get them together to take a monthly picture.

I’m certainly not the first person to do this. You can find examples all over the internet of this, and a simple Etsy search will bring up hundreds of listings for those sets of twelve stickers to stick on onesies, to document a child’s first year.

But did I stop at twelve? I did not. That’s not to say I haven’t considered stopping several times. But every month, when the fourth rolls around again, 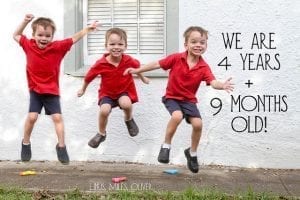 I round the boys up and tell them it’s picture time.

Whether you are pregnant, have a newborn, or even want to start with an older child, I have some tips for your monthly photo sessions.

Use one object as a frame of reference

Keep one object consistent in every photo, for scale. At first, we took every photo in the same loveseat, but at about 18 months (is there a harder time to take photos of children?) we were at a friend’s restaurant and since the boys were being in a rare cooperative mood, I just decided to take their photo there. I also wanted to keep the boys in birth order, but that didn’t work out as planned either. Most people won’t have to worry about that, though! 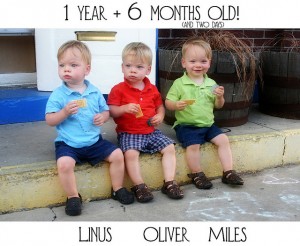 Don’t take it too seriously!

Have fun with it, you’ll get better smiles that way. As the boys get older, I hear a lot of “this is BORING!” so I have to think of new tricks to get genuine smiles out of the boys. Some months I’ve had them jump or make silly faces, and I’m not ashamed to admit that yelling “poop!” will always get little boys to giggle. And big ones too.

Don’t stress about the camera

Photography is my passion, so yes, I use my beloved DSLR to shoot these monthly pictures. Use whatever you do have to take your monthly photos. Do you have an iPhone? I confess, as much as I love my camera, I’ve been taking a lot more photos with my iPhone lately. There are so many fun photography apps that your options are endless with a smartphone.

Once you’ve taken your photo for the month, what are you going to do with it? Since I have a blog, it’s natural that I post each photo there. 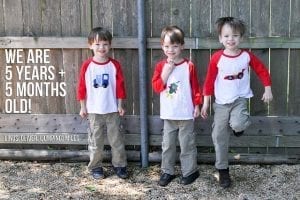 I have one page that has every monthly picture on it, which is fun to scroll through. If you don’t have a blog, you could post them on Facebook, or share with Instagram. Or maybe you want to keep them all to yourself. Create a photo book every year, or use them for a calendar. I can’t tell you how many gifts the boys’ grandparents have received with these photos on them. Mugs, mousepads, even a blanket! I also like create slideshows and will put them on DVDs. The boys really enjoy watching them, and trying to figure out who is who in the photos.

Be dedicated to documentation

Take your picture even if you’re not at home. I’ve had to take monthly photos at friend’s houses, on the street, and even in the airport. The important thing is documenting your life and your children. The setting is the least important part. Don’t stop! This month, we took our 65th monthly photo, and I hope to get many, many more.

I Love My Village

Puberty is Coming … What’s a Mom to Do?