Here’s how it all began … I took Oliver with me to a parade on Mardi Gras day. He was the only one who wanted to go. After a few hours, I got a phone call from my husband. “Miles has a fever, can you come home?” We took the ferry back and got home in time for me to take Miles to one of the few urgent cares open on Fat Tuesday. He was tested for strep, but the test was inconclusive. The doctor diagnosed him with … something … and gave him a z-pack.

Fast forward a couple of weeks. Oliver has had a dry cough for ages. Linus too, but Oliver’s is the worst. I take him to the pediatrician, who says, maybe there’s something going on, let’s just give him a z-pack to be on the safe side. Maybe it’s a sinus drip. 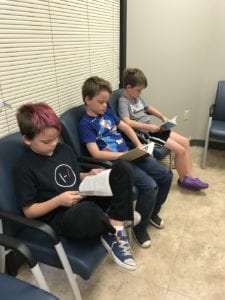 A week later, everyone is coughing. No cough syrup helps. I’ve stocked up on local honey, echinachea, vitamin c, orange juice, everything I can think of. The cough is going to drive me insane. Nothing is working.

I am on a first name basis with the school nurse. (I mean, literally. Her name is also Pam.) The school office manager answers the main line with “Hey Pam!” Because every day I get a call from the nurse, saying a kid is in her office, coughing like crazy. It’s disruptive to the class, they’re miserable, no one’s happy.

Off-handedly, Nurse Pam says, “you know, I wonder if it could be whooping cough?” I scoff. Please, my kids are vaccinated. What is this, 1940? No one gets whooping cough. I tell my husband and our pediatrician (also our next-door neighbor) and we all dismiss the idea.

So after a few more days (and many, many round trips to school), I take all three boys to Children’s Hospital for a viral panel. It involves shoving a tube up their nose to collect boogers. The boys giggle, even though it’s clearly uncomfortable. We go home.

I get a call from the pediatrician that afternoon. “Are you sitting down? Linus tested positive for whooping cough. Miles and Oliver were negative.” Well, that’s weird. How could only one of them have it? But then I remember that I read the treatment for pertussis is a z-pack! And who already had a z-pack? That’s right, Miles and Oliver, the two who tested negative.

They were fine to go back to school, but Linus had to stay home for five days, until the z-pack was finished. I had to go pick up Miles the day after we got the diagnosis because he was coughing, and the nurse’s office was filled with coughing third graders. The email that went out to the parents the next day informed everyone that there was an outbreak of whooping cough in the third grade. Ack! The PTO Facebook page had a post up by a concerned parent not long after, and I confessed immediately that it was my little germ-infested boys that were the culprits. Fortunately, of all of the kids sent home with a cough, only one was diagnosed with pertussis, and he recovered quickly.

It’s now been over a month since we got the diagnosis. They don’t call it the “hundred day cough” for nothing. Linus had to be picked up from school every day in April for his cough. Fortunately, he is improving, and while he is still coughing, it’s not enough to get him sent home. But it’s been a rough ordeal for everyone.

What’s the lesson here? Listen to your school nurse, probably. We might have caught Linus’s case a bit earlier if we’d tested him a bit sooner, but it probably wouldn’t have changed anything. In the end, I can only be grateful for my boys’ improving health, and that they’ll all finish third grade together soon. I don’t anticipate a quiet summer. Instead, it will be punctuated with the coughs of my kids.

Things only a parent thinks about

Winter in NOLA – We Have Some Problems