On August 28th, the Pumpkin Spice Latte returned to Starbucks, and the internet exploded.

Literally. Memes, gifs, and posts filled news feeds everywhere. It caused one of the great divides of 2018–those excited about pumpkin spice lattes, and the haters. 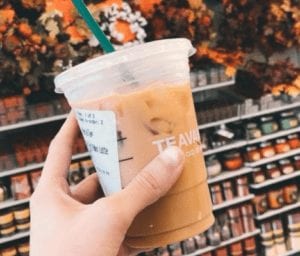 I bought a pumpkin spice latte on August 28th, nearly a month before the Autumnal Equinox, and you know what happened? Outside of enjoying one of my favorite seasonal beverages, nothing.

I didn’t notice a chill in the air or an abundance of fall foliage as I pulled out of Starbucks. A bunch of pumpkins didn’t squash pool floats, and, last time I checked, it didn’t zap margarita mixes from the shelves.

The air is just as muggy and hot as it was last week.

Yet, the amount of uproar on the internet would make you think this single drink has such powers. Apparently my enjoyment of a seasonal coffee drink is ruining everyone’s last few weeks of summer. My pumpkin spice-flavored agenda is cutting margarita-drinking time short (Fun fact: Cinco de Mayo is a full month and a half before the official start of summer).

Trust me, if drinking a Pumpkin Spice Latte had such an effect, I’d be chugging it in the middle of July when I can’t even walk to my mailbox without breaking a sweat. But, it doesn’t.

So, why the uproar?

Yes, I know it isn’t officially autumn yet. Collectively, the state of Louisiana doesn’t know when it’s autumn, ever.

Yes, I am aware that the Pumpkin Spice Latte doesn’t actually have pumpkin in it. It’s actually the spices that go in pumpkin pie.

Yes, I realize it’s an over-priced sugary drink, but my budget and calorie consumption are none of your business, either.

I also know I drank a pumpkin spice latte and nobody died because of it (this was *almost* the title of this post).

Other people’s coffee habits have ZERO effect on my life and the weather. Similarly, a store releasing a favorite seasonal drink has no effect on your life. Autumn will still arrive at its regularly scheduled time, and Halloween will follow shortly thereafter. Side note: Have you bought your kids’ Halloween costumes yet? Joking!

To those who say “Good for you, not for me,” I say, “Right back at you, sister!” Let’s clink our Pumpkin Spice- and Margarita-filled cups together.

To the haters, let’s put a stop to this ridiculousness. My husband is already mortified I’m actually writing this post.

But, please, stop hating on my pumpkin spice latte.