We weren’t originally going to go. That’s weird for us because we are Mardi Gras people. I’m talking late nights and early mornings at “the spot,” dodging the ladder police, letting the kids skip school Hermes Friday. We go hard and survive only on glitter and fried chicken; however, with the recent crime surge and feeling generally blah lately, we planned 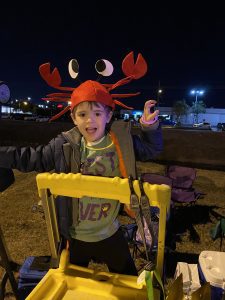 to go out of town. But then a work complication came up that kept us home, so we reluctantly decided to do Mardi Gras. We did it differently this year though. We didn’t hit our usual superkrewes on the Uptown route. We caught a few Uptown parades the first weekend, took a big break, and then went to Metairie for Mardi Gras Day. And it was absolutely perfect, exactly where we needed to be. It doesn’t matter how you did it. If you went to any part of Mardi Gras anywhere this year, you felt it. You know this Mardi Gras hit different.

On Mardi Gras Day, the sun came up brighter for the beautiful citizens of New Orleans. Our people, weary from two years of having to be resilient in ways only New Orleanians can be, walked away from this Fat Tuesday refreshed and re-energized. It’s a phenomenon really: feeling invigorated yet exhausted, feet aching yet walking with a pep in your step. Only a New Orleans Mardi Gras can do that to the body. This year, the music was jazzier. The glitter was sparklier. The king cake was sweeter. Masks were for Carnival, not covid. Blue tarps were for marking “the spot,” not patching roofs. Kids were out of school not for quarantine or evacuation but for celebration. We got to see our Mardi Gras regulars, you know the people you only run into once a year by their 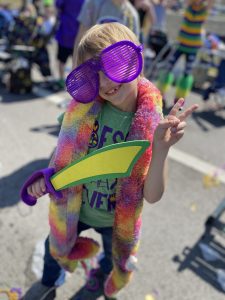 “spot” as you stroll along the route. After two years of trying to distance from one another, it was glorious to be able to catch up with old friends and to make fast friends with other families, the neighbors to our neutral ground “spot.”

And that doesn’t mean we’ve forgotten about the woes plaguing our world today. We’re not oblivious or indifferent to disease and war and social injustice. We just process things differently here in New Orleans. After all, we drink at funerals and second line while mourning. Catholics know that the purpose of Mardi Gras is to indulge prior to a 40-day (if you don’t count the Sundays) period of Lenten austerity. That’s just as true in 2022 as it is any other year, but this Mardi Gras was extra special because we indulged following a two-year period of stress and heartache. We picked up Mardi Gras 2022 right where we left off. Our people didn’t miss a beat. It was like running into old friends at a school reunion: natural and familiar and joyful and therapeutic. I’ve always enjoyed Carnival season, but now I cherish it. I’ll never take that comfort and joie de vivre for granted again.