Once upon a time, there lived a prince and a princess. They met in college, fell in love, and got married three years later. They were so excited to start their life together.

They both had great jobs, had just bought a house, and a few months after a devastating miscarriage, they found out they were expecting their first baby in later that year.

Life seemed to be falling into place perfectly.

And my husband and I are far from royalty. But at the time, I had nothing at all to complain about. And I was grateful for so much.

Then came the plot twist.

Hurricane Gustav churned in the Gulf of Mexico, making its way towards our area, and I was getting close to my due date. My nerves got the best of me, and I begged my OB to induce me so I wouldn’t have to evacuate hours away and possibly be stuck there for any length of time. He agreed and I was admitted the next morning to begin my induction.

To make a long story short, on August 28, 2008, after twelve hours, I gave birth to my very first baby girl. Her daddy and I were head over heels in love with her. 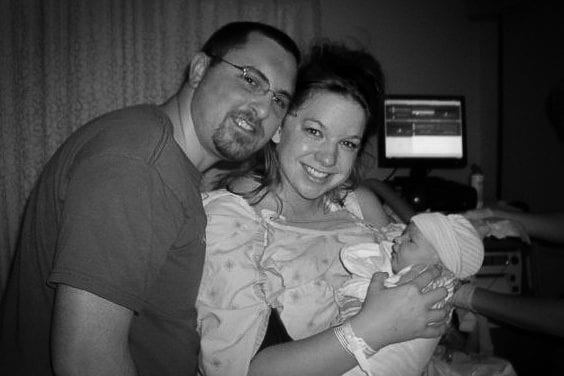 Two days later we loaded up all of our pictures and important papers and evacuated from Hurricane Gustav, three hours away, to my sister’s big farmhouse where most of my family was staying.

Three days after my baby’s birthday, came mine. I felt off, but I just thought it was my hormones. I sobbed over my birthday cake while trying to nurse my baby girl. I thought everything would just level out and I’d feel fine soon.

I wasn’t sleeping well because I was getting up every few minutes to check on the baby, I was scared to bathe her, and I was terrified she would end up with a diaper rash if I didn’t change her often enough. Even after years of babysitting and taking care of my nieces and nephews, I felt clueless.

We were able to head back home after about a week, and began life as a family of three. Our first night home, the baby began cluster feeding (latching on for what feels like years in an effort to build up mama’s milk supply).

Sleep deprivation is no joke.

I was awake every hour, sometimes more, and I was beyond frustrated. I laid the baby back into her bassinet every time she fell back to sleep, and then as soon as my eyes shut I would fall asleep. Minutes later, she would wake up ready to eat again. The cycle continued for days on end. My wonderful husband offered to help, but there was only so much he could do. He had to get up for work in the morning, and I was breastfeeding.

I found myself confused and cranky. I was tired beyond words, always hungry from nursing, and staring in the mirror at a body that I didn’t even recognize. What happened to my fairy tale?

One night, in the midst of yet another nursing session, my eyes burning and heavy, I looked down at my beautiful baby. She had light strawberry blonde hair and dark eyes. In an instant, a scene played out in my mind of something horrifying happening to her.

It jolted me out of my daze. Guilt washed over me like hot acid from my head to my toes. My heart pounded out of my chest and loud into my ears. What just happened?! I would never ever do anything to hurt my baby. I was madly in love with her, I would do anything to protect her!

Tears streamed down my face and as I laid in bed, I saw scene after terrifying scene in my mind. I was wide awake, but desperately trying to fall asleep, all while jumping up every time the baby made a peep.

The next morning my mom came over and she could tell something was wrong. She cradled the baby and asked how I was doing. The thoughts I had the night before flashed through my mind again, and I swallowed the lump in my throat. I knew I could talk to my mom about anything, but I was so scared.

What if I told her and she felt like I was a danger to the baby? They would take her away, and they would put me in the hospital!

I tiptoed around the issue, and finally decided I could tell her.

“I’ve had these thoughts about the baby, mom. They scare me to death.”

She took a deep breath and told me it was okay, and that it was so common, and she knew of so many new moms that had experienced the same thing. She answered so many of my questions. I was relieved that I wasn’t alone, but still scared out of my mind.

I decided to tell my husband when he got home from work, although I was terrified to tell him too. I knew that he loved me, but we were only married a year at that point, and I was about to tell him some very heavy news about myself- including that I was scared to be alone with the baby.

He wrapped his arms around me and told me that we would get through it together, and that he completely trusted me with the baby. That was huge for me.

I became obsessed with finding out more about what I was going through. I scoured the internet, desperate for anything that would tell me I was going to be okay.

Weeks went by, and slowly I began to feel more in control of my mind. I prayed and prayed for strength. I just wanted those awful images to stop.

Those precious first few months as a mother should have been my fairy tale, or so I thought. The reality is that it is much more common to experience postpartum anxiety or depression than I ever imagined.

What I experienced was without a doubt postpartum anxiety.

The intrusive and obsessive thoughts tormented me, but with such incredible support from my husband and family, I made it through to the other side.

I bonded beautifully with my oldest daughter, the one who made me a mama. She is blissfully unaware of the times I cried over her in her bassinet. I hate that I have these memories, but I know that I didn’t have any control over it. Over the next 10 years, that sweet girl would become the biggest big sister to four little sisters. I was aware that I could experience postpartum anxiety and depression again after each baby, but thankfully, I didn’t.

I wish I could go back and give that exhausted, young, brand new mama a big hug. I’d tell her she’s going to be just fine. She’s going to love that baby and her sisters and their daddy so much that this dark shadow will be just a memory in the middle of her beautiful life. 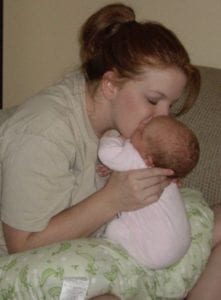 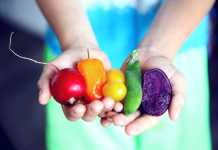 Here’s to You, Parents of Kids Who Do All the Things...

What to Expect the Year After Baby: An Honest Review, by...