Two weeks ago, I ran my first 10K, or race in general, in over a year. And I ran it six months after having my first baby. For me, it was more than just a race. I needed to run this to prove to myself and my daughter and my family that I am still me.

Ten years ago, running became a part of me. I was a bored, overweight college student, and one day I woke up and decided I was going to run a half marathon. When I told my family, they laughed at me but you probably would have too. At that time I literally could not run one block. But, I found a running group in Nashville, and six months and 40 pounds lighter, I ran my first half marathon.

Over the years, my fitness journey has evolved. I’ve tried Crossfit, Barre, yoga, spin – if it involves sweating, I want to do it. But running 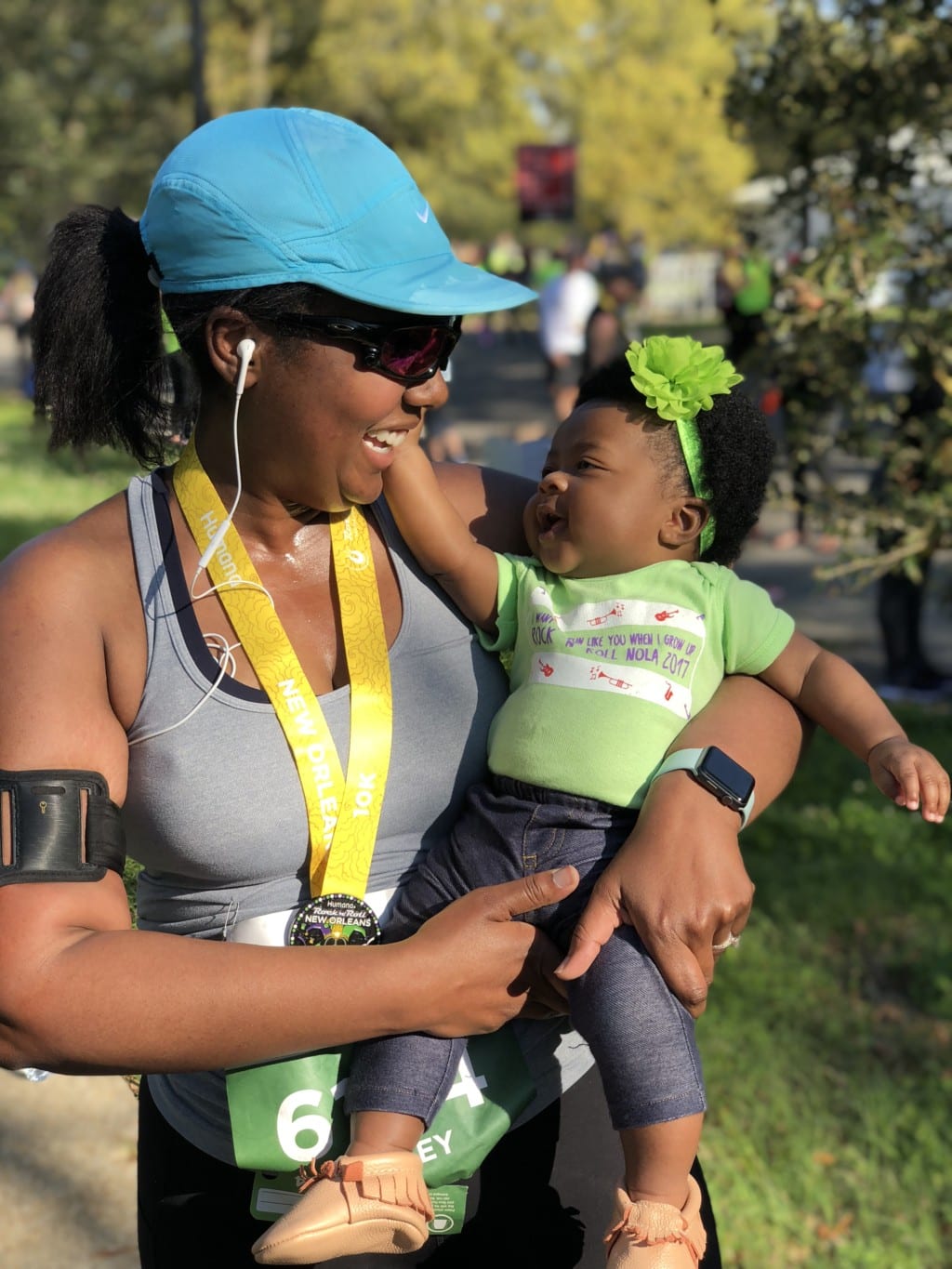 has always been my home base, whether I was training for a half marathon or relieving some stress with a quick run, it felt like home. While I tried to get my husband, sister, friends, and anyone else who was interested to join me, and they would temporarily, eventually they would fall off, and it would always go back to being me, myself, and the road again.

So, when my sister said she wanted to run her first half marathon with me two Novembers ago, I was ecstatic. That is until I found out a month later that I was pregnant and my doctor strongly discouraged me training and running that distance. After much thought, and some pouting, I decided it was best to sit out of the 2017 Rock n’ Roll New Orleans Half Marathon, but I vowed to be ready in 2018.

Fast forward to August 2017. I just delivered my new baby and I was completely smitten and also 65 pounds heavier. How in the world was I going to lose all this weight? I didn’t know exactly how, but I knew I could go back to my running roots for assistance. I started training and as I returned to work and got back into the swing of things and the seasons changed, I realized I didn’t have quite as much time as I used to.

After much soul searching, I decided that I would again sit out the half marathon, because as much as I knew I had the mental grit to get through those 13 miles, physically I wouldn’t be ready and I couldn’t afford to be injured and unavailable to my daughter just to say I finished a race. But, I also knew deep in my heart I needed to achieve some sort of goal to show myself I could still commit to something, put in the work and finish it. I settled on the 10K, not super short and it would require some effort but not so long that I wouldn’t be able to train.

When I got to that start line, I was so nervous, but I reminded myself of why I was there. Yes, I was a couple minutes slower per mile than I had been in the past, but I RAN the whole thing and my baby and my husband, who has literally been at every race finish line cheering me on for 9 years, were there waiting for me to take my last few steps.

As I crossed the finish line, looking at them, I knew I was still me. And if I decided I would, I could literally accomplish whatever I wanted too. I don’t think I’ve had that feeling after a race since literally my very first one back in Nashville, almost ten years ago. It felt so good to overcome those underlying feelings of fear and complete something for me.

Mamas: What have you been wanting to do but afraid to take the first step? My advice, do it! You are so much stronger than you think.

Mardi Gras :: How I Fell In Love With New Orleans

We Cloth Diaper and You Can, Too!