As I sit here typing this, I am not only eating my words but am practically choking on them. My husband and I did the unthinkable … we bought a minivan! I swore I would never own one again. I would drive my Prius until it no longer drove. We even bought smaller car seats so we could fit 3 across in my Prius. (For those wondering, we used a Britax Marathon, Diono Radian, and a Cybex Aton2.) Three across in the Prius seemed like a fine idea for a while. And it works. We’ve made trips to Costco, Target, and Whole Foods with no major issues. I’ve done school drop offs and pick ups fairly easily. 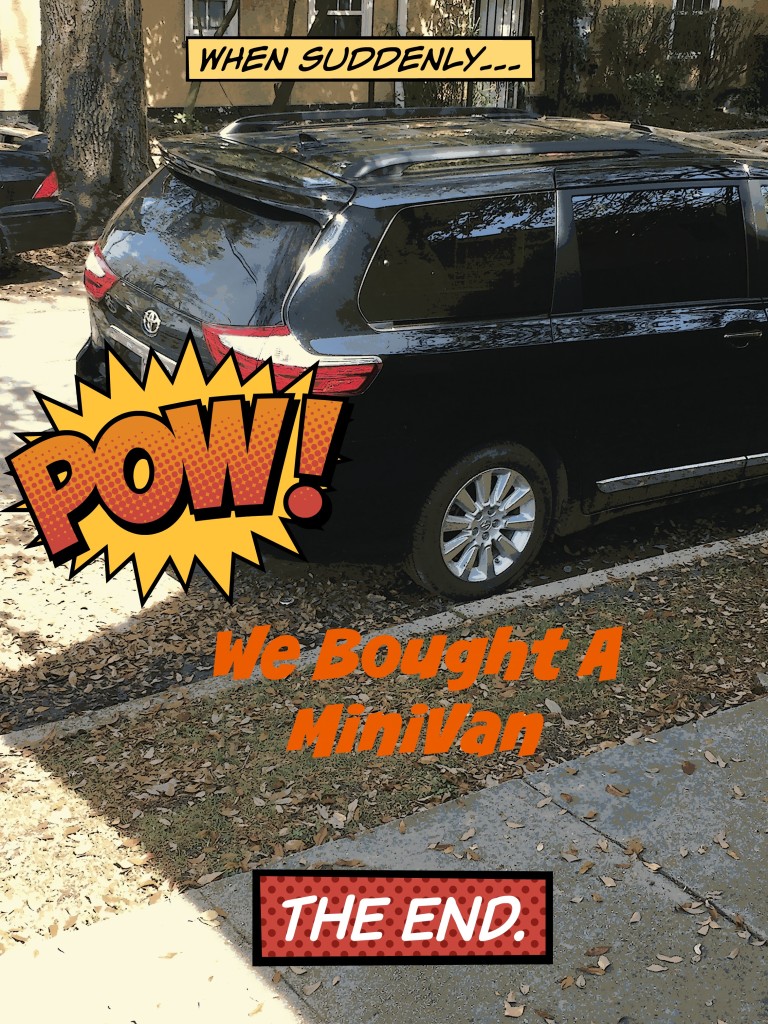 So, why the minivan? Why now, after we went and bought a brand new Prius not even 6 months ago?

And if I have to tell my oldest to get her dirty hands off her baby brother one more time, I just might lose it.

It all began about a week ago when the older two had a huge fight in the 10 minute car ride between school and home. I had enough. The older one was intentionally kicking and touching the younger one. Hitting, hair pulling, and yelling ensued. And it was at that moment, where I was getting annoyed yet again, that I knew I needed to change this all. I saw a lady at Whole Foods who had a tiny minivan: a Mazda 5. It looked like the perfect solution for us. It was small but had the sliding doors and a third row of seats. Everyone would have some space and we would all be a little bit happier. So on a random night, we drove to a dealership to look at this car. But, as great as it seemed, it was not the car for us. It had no storage space at all. No room for the stroller. No room for groceries or Costco trips. In fact, my Prius had more cargo space than this van. So we left the dealership to research other options before making another trip.

Do we really need minivan?

My husband and I had a heart to heart about the possible new purchase. Why did I really want the minivan? Was the fighting too much to deal with even though my daily trips were pretty short? We thought about it some more. My husband’s parents live 5 hours away. We like to go to Rosemary Beach. We drive to Disney once a year. All of these trips in the Prius seemed like the stuff nightmares are made of. And the only other option was taking two cars on these trips, which seemed crazy. I hated to admit it after swearing that we could make it work, but it boiled down to one simple fact :: we needed more space.

So we decided to go big or go home. We looked at the Toyota Sienna and the Honda Odyssey. And in the end, we chose the Sienna. And we also decided to get all the upgrades available. Swagger wagon, indeed! My new ride now has a sunroof and a moonroof, a wide screen entertainment system, heated seats, remote door opener, remote car starter (for those days the car needs to be cooled off before getting in), bluetooth, navigation, 4 seats with LATCH for our car seats, and an awesome speaker thing that allows me to talk to the kids from my front seat without them talking back. But most of all, my new car has plenty of space!!

So, I apologize to all of those I laughed at who got minivans. I was smug in my attitude and I take it all back. I hope you can now accept me in your club.

tasc Performance Has a Gift Guide Option for EVERY Dad