Okay, okay… so I didn’t have my husband grill my placenta in the back yard and serve it up on a Tuesday night, but I did consume my placenta. Why? First, let me say that I’m a self-proclaimed “crunchy” mom, meaning I had a water birth attended by a midwife and a doula, I cloth diaper, I use coconut oil as diaper rash cream, and…oh yeah…I ingested my placenta. Before you cast all the hippie stereotypes upon me, I’d like to add that I have a full time job working in corporate America, I don’t own a single piece of macramé clothing, and I have never driven a Prius (although, my first car WAS a VW bug!).

I’ll have to admit, when I first heard about placenta consumption, the “ick” factor almost kept me from finding out more, but I’m so glad I got over it and researched it for myself.

Despite its appearance, the placenta’s purpose is a beautiful one. It is to support a growing life and provide the baby with nourishment while in the womb. Placenta consumption, or placentophagy, has been used in traditional Chinese medicine since the 16th century. Its benefits are believed to aid in recovery, replenish depleted nutrients, return the uterus to its pre-pregnancy state, improve energy, and encourage a happier postpartum period. 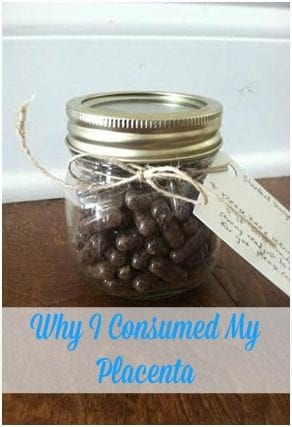 My attempt to avoid the “baby blues” and postpartum depression was the main reason that placenta consumption interested me.

It’s no wonder that the majority of women (60-80%) experience some form of sadness after birthing their babies. During pregnancy, women have the most hormones they’ll ever have in their life, and just after birth, the hormone levels fall to their lowest levels. This hormonal roller coaster, coupled with the fact that you’re in an extremely emotional and physically exhausting time in your life, is made only more difficult by the how women are “supposed” to feel about their bundles of joy. This was something I wanted to try my best to avoid, and the more I read- the more ingesting my placenta seemed to be the answer.

I found it fascinating that nearly every mammal, including herbivores, eats their placenta after birth. There are many theories as to why this happens: maybe it’s to clean the birth site to ward off predators, but even mammals toward the top of the food chain do it. There are no concrete scientific studies that prove or disprove the benefits of placentophagy in humans, but the fact that it occurs in nature was enough for me to be comfortable with the safety of the practice.

I say “ingest” or “consume” because I didn’t cook it up like a steak or blend it in a smoothie (although there are some women who do); I had it encapsulated. Luckily, my doula offered placenta encapsulation as part of her services for $150. She offered two methods: dehydrated raw then encapsulated or the traditional Chinese method which is steamed first with ginger, lemon, and a hot pepper then dehydrated. Each placenta yields about 100 pills. I had the capsules when I returned home from the hospital with the instructions to take 1-3 capsules up to three times a day for the first two weeks and then as needed. It was just like taking any other vitamin!

While I don’t have anything to compare it to because I did it with my first baby, I can say that I did not experience the baby blues, and I had an easy recovery with crazy amounts of energy. My husband and I own a CrossFit gym that requires him to get up at 5AM to coach the early classes, not an easy task with a newborn at home! While I’m sure he would have helped me during the night if I needed it, most nights I took on all of the duties and let him sleep because I honestly felt fine. Perhaps it was the placebo effect. It worked because I believed it was working, but I’ll gladly shell out $150 the next time around to have the same result, placebo or not!

At first, I was shy about admitting that I had joined the ranks of celebrities who have become infamous for {gasp} EATING their placenta! But, if parenthood has taught me one thing, it’s that everyone will have an opinion, good or bad, about practically every decision you make. I have learned to be confident and unapologetic about the choices that I’ve made, and I would love help open others’ minds on the topic!

Plus, it’s kind of fun to freak people out at first! 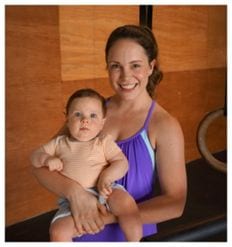 Emily grew up in Peachtree City, Georgia. She received a degree in vocal performance from LSU where she met her future husband, Bradley. Emily and Bradley moved to New Orleans and got married nearly 6 years ago. Since then, she went back to school at UNO and is now working as a CPA for a large public accounting firm. In May of 2013, she and her husband opened CrossFit Roux, and they realized a long-time dream of growing the CrossFit community of Greater New Orleans. Her passions include theater, traveling, food and family. Emily still sings and has performed with the New Orleans Symphony Chorus, the New Orleans Opera, and she is a regular cantor at St. Francis of Assisi Church. She and her husband welcomed their first son, Brennan Luke, in September of 2013. The family lives with their black lab, Chicory, in Lakeview.

Running a Virtual 5K is a Very Real Treat!