We have a neighborhood Reginelli’s that we frequent often. It is casual, easy to get in and out of, and they don’t mind kids. Right after my second child was born, I was irritated with Reginelli’s because the restaurant did not have a baby changing table. Yes, there are many restaurants that don’t, but this particular location is centered in a neighborhood and provides a kids’ toy box. So they obviously know families are a key audience for them. 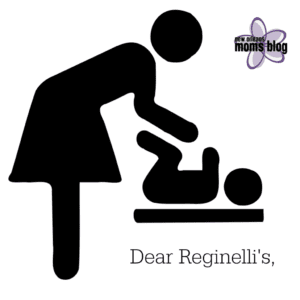 When we would go there, I would have to take the baby out to the car which is unsanitary and actually difficult when you factor in numerous things (rain, squirmy baby, messy diapers, etc). But even with my annoyance, we continued to be patrons.

Around that same time, Reginelli’s did a customer survey. They asked for feedback, and so I gave it. I simply filled out the online form and said that for such a family focused location, I really think a changing table would helpful.

A week or two went by, and I never thought again about the survey. Then, I got an email from the manager of my neighborhood Reginelli’s. She thanked me for filling out the form and thanked me for bringing it to their attention that they lacked a changing table. She agreed with me about the need for a changing table and let me know that a table was ordered and would be installed in the next week. It was awesome that the Reginelli’s team read the survey and that she took the time to respond. And it was even better when the changing table arrived!

While we were dining there frequently any way, it made the experience of being a patron so much better. It was easier to go there with small kids, and I was no longer disgruntled by hauling the baby to the car to change her diaper. It is the small things that make a difference.

I personally think you can tell a lot about a restaurant by the restrooms. Being the mom of two girls, one of which is newly potty-trained, we are frequent visitors to restrooms wherever we are. A clean and stocked bathroom that is easy to navigate with kids in tow really is a luxury.

Going to the restroom with little ones can be quite the exercise of parenting skills. I would have never tried to fit three people in a stall prior to becoming a mom. I never sought after the toilet seat covers until trying to keep tiny bottoms off the toilet seat. Or have I never said so many times on repeat, “don’t touch anything in the restroom.” Not to mention trying to washing everyone’s hands at the sink where you have to hold down the faucets for water is a project itself when also trying to hold the kid up at the same time!

So with this post, I wanted to just take a minute to thank businesses for considering the user experience in their restrooms. And a big thanks from this momma to Reginelli’s.

Who do you want to give a shout out to for their family friendly restroom facilities?

Being Forced Out of the Pregnancy Closet: Sharing Pregnancy News After...