Moving to New Orleans took me by surprise in many ways. One of the biggest surprises was Mardi Gras. Before I moved here, I thought that there was one parade on Fat Tuesday and that it took place on Bourbon Street. I never could have imagined seeing children at the parades, and I was convinced that you had to expose your body to receive beads of any sort. I couldn’t have been more wrong. For those of you who may be new to our city and laboring under some of the same misconceptions that I was, this post is for you! I’ve compiled 22 tips to help you navigate the Mardi Gras season like a pro!

Getting Prepared for Mardi Gras

1. Take some time to research the history of Mardi Gras. You’ll find that many of the things you’ll see and experience are derived from centuries old traditions. Learn about the Flambeaux, who led the way of Rex at the City’s first Mardi Gras parade in 1718 and haven’t missed a Mardi Gras since. Discover the Mardi Gras Indians, how they came to be and what they mean to the community. And those plastic coins you’ll see people swooning over? They’re known as doubloons, each unique to their particular Krewe, and for many, they’re the most coveted “throw” around. 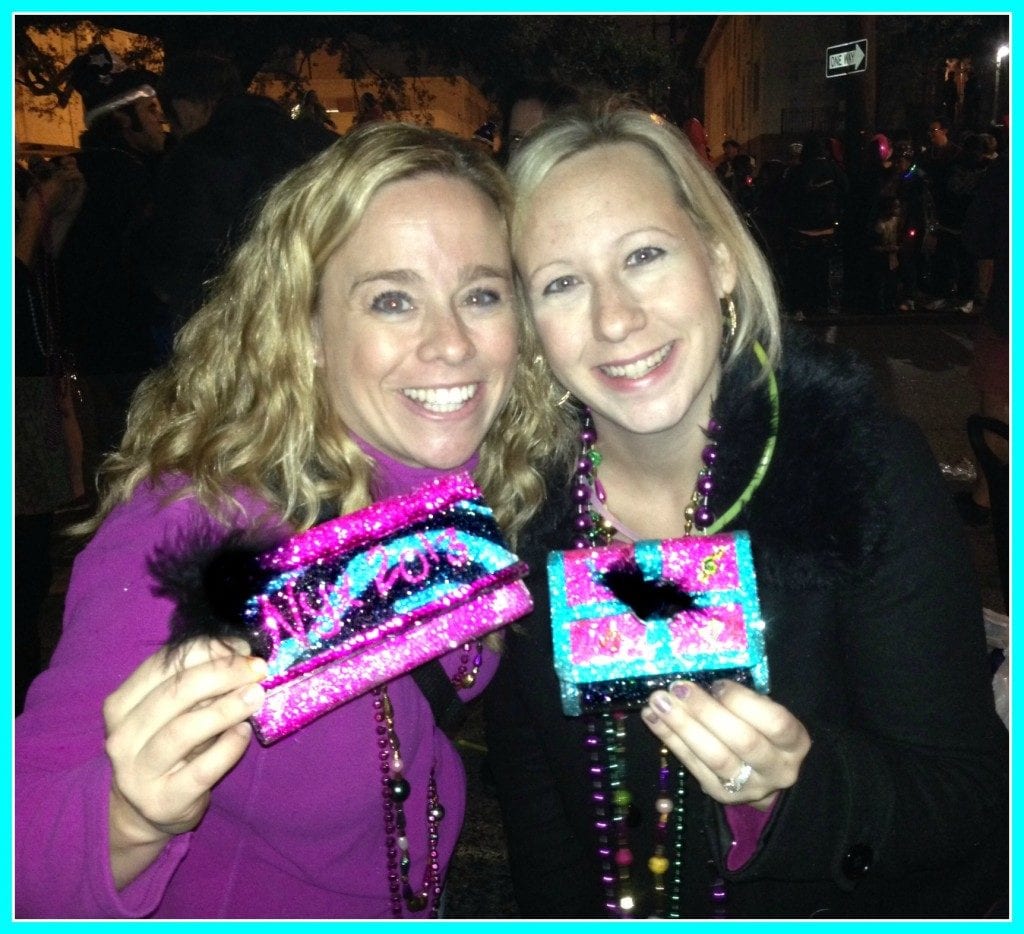 2.  Also, be sure to learn a little bit about the Krewe you’re going to see. Each has a unique history, every parade is different, and many have a “signature” throw that is considered good luck to receive. If you’re well informed you won’t be confused as to why you just caught a toilet plunger or a roll of toilet paper off of a Mardi Gras float, and you certainly won’t give that coconut away.

Going To A Parade

3.  Consider planning your parade experience in advance. There are multiple parade routes. The main ones are Uptown and, to a lesser degree, Metairie, but Mid-City, Slidell, Chalmette and many other smaller towns have their own parades, too. Figure out where you want to watch and how far down the route you’ll be. Spots toward the middle or end of the route won’t see a float until an hour or two after the parade starts to roll, so plan accordingly. To stay on top of where your parade is located in real time, you can download an app (we love WDSU Parade Tracker) using state of the art GPS technology that allows you to pinpoint exactly where the lead float is. Another amazing resource is the Arthur Hardy’s Parade Guide.

4.  When it comes time to arrive, you can find schools, centers or businesses who will open their facilities and parking lots for a fee, which can be a great way to ensure shelter in the event of inclement weather, restrooms with running water and a close/safe place to park your car. (Trust me, the city’s Port-O-Potties are not fun to navigate with little ones. We are actually putting off potty training until after Mardi Gras! HA!) The $10 entrance fee for a potty band at a Church or school is well worth it!

5.  Just in case, pack lots of sanitizer, WetOnes and bring your own toilet paper! You’re welcome!

6.  Picking a location to watch the parade is crucial. If you have children, you do not want to plan to watch a night time parade in the CBD or even Lower Garden District. They will not reach you until well after bedtime. For us, we like to stand on Napoleon around St. Charles. It’s very family friendly and you’ll be on your way home before the start of the parade reaches the CBD. That being said, it’s still going to be a very long night. The later it gets the more people have to drink and the more inappropriate the environment becomes for children. Some think it’s best to stick with daytime parades if you have very young children. 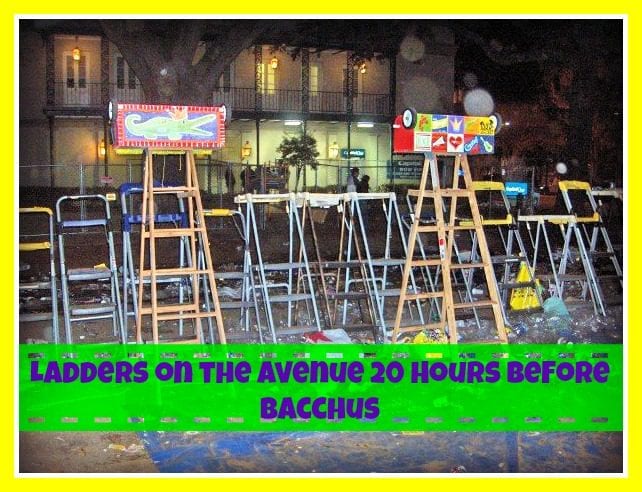 7.  Particularly with the larger parades (basically anything from the Saturday before Fat Tuesday onward), space is at a premium, and many will camp out overnight to stake out the perfect spot. Be courteous of other parade goers if you’re planning to camp out. Only take the space you need. This year, your ladders need to be six feet back and you can’t chain them together (thank God). Don’t be offended by people walking on your tarp. Space is limited (and it is public property after all), and nobody means any disrespect. It’s just the nature of the beast.

8.  Parades do have a scheduled start time, but tractors break down, things get behind schedule and often, they’re late. Enjoy the time with your family, and make sure you’re in a position to do so. Bring a football, a well stocked cooler and take advantage of your time together. When planning food for the day, a bucket of Popeye’s, a bag of Zapps and a King Cake is all you need!

9.  Once the parades start rolling by, be sure to pay attention to the floats, not just the riders throwing loot from them. Each parade has a theme that is kept secret until they roll and each float is a piece of the theme. The parade tells a story as they roll by. Some are silly, some are satire and some will warm your heart.

10.  You may think that you’re getting the hang of things come Nyx Wednesday and Muses Thursday, but starting with Endymion Saturday, all the parades are on steroids. People camp out immediately after clean up on Friday night. Space will be beyond limited and if you didn’t camp out, be prepared to travel light because you’re going to be squeezing in somewhere. Once the weekend before Fat Tuesday hits, it’s a day long experience, not a per parade experience.

11.  This is New Orleans, so don’t be shocked when you see small children propped atop tall ladders, coolers stocked well with both juice boxes and beer and complete strangers meeting in the streets discussing where they went to high school. 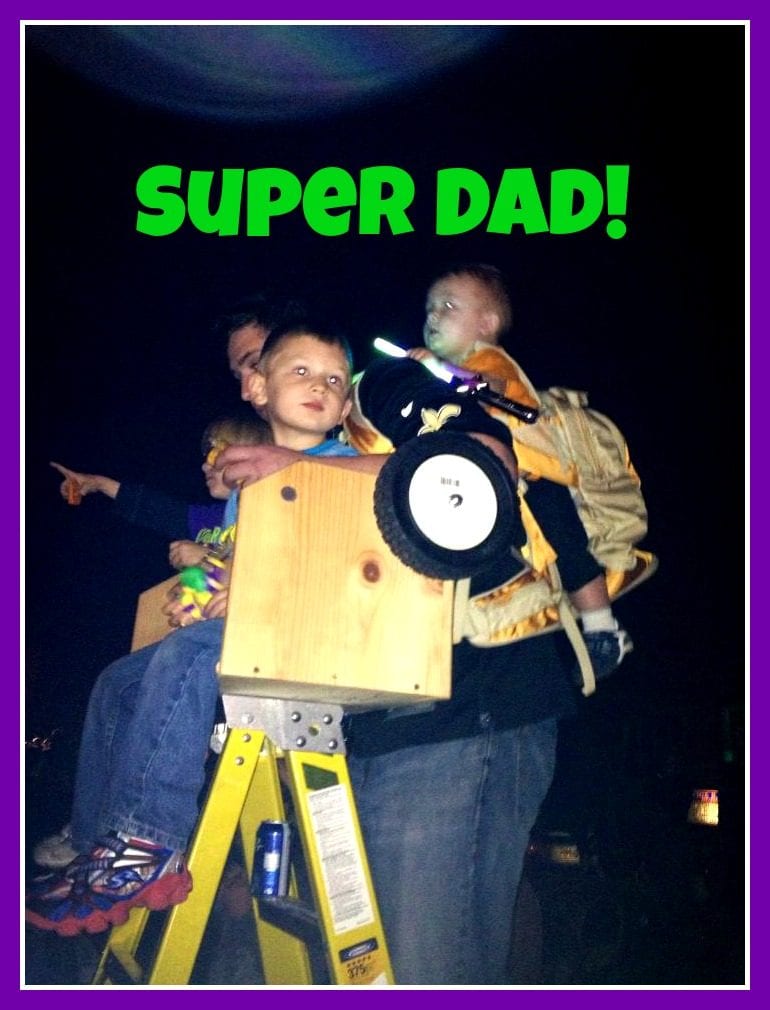 12.  If you’re looking to join the locals in placing your kids in a ladder, you can buy the kit at most local hardware stores. To really look like a seasoned Mardi Gras veteran, spend some time with your family painting your ladder and adding little tweaks to it to make it unique to you! Also, do not leave the ladder unattended. If you place your children on the ladder, you’ll need a hefty adult to stand on the ladder to try to anchor it and keep the kids safe(r).

13.  Don’t expect to be able to leave the parade early if you’ve parked on the route. Consider yourself locked in once you arrive. If you need to leave early, park blocks away and consider the parade route when trying to get home, as you will not be able to drive across the route at any point.

14.  Clever posters made especially for each parade can significantly help your chances of catching the “good’ throws.

15.  Feel free to dress as crazy as you like. Everything from Mardi Gras colors to full on costumes are status-quo.

For Your Comfort and Safety

16.  Protect your children from the beads. Most of the riders try their best to throw gently when they see children, but stray beads do come and when they hit, it hurts! Be vigilant! Staying towards the back is not a safety zone. The male riders especially like to test their throwing abilities. The back can sometimes be even more dangerous.

17.  Wagons are a necessity. They provide a welcome place for the kids to rest, store beads and drag sleepy kids back to the car. I also enjoy a hefty jogging stroller because you can turn it around if your baby is asleep and it provides a secure place where your he or she won’t get hit by errant throws.

18.  If you must cross the street in the middle of the parade, be sure that you don’t cross in the middle of a marching band. This is for your own safety. They’re accompanied by parents performing a crowd control function and they won’t hesitate to physically grab you and throw you out of the way if necessary. Beyond that, disrupting their path is disrespectful to the band members, who march over 6 miles in each parade while playing music. Most of the bands participate in multiple parades too. Give the kids the respect of enjoying their efforts and not cutting across them.

19.  At the end of the season you can donate your beads to ARCGNO or St. Michael’s Special School and all those beads you worked to snag will go towards a good cause. 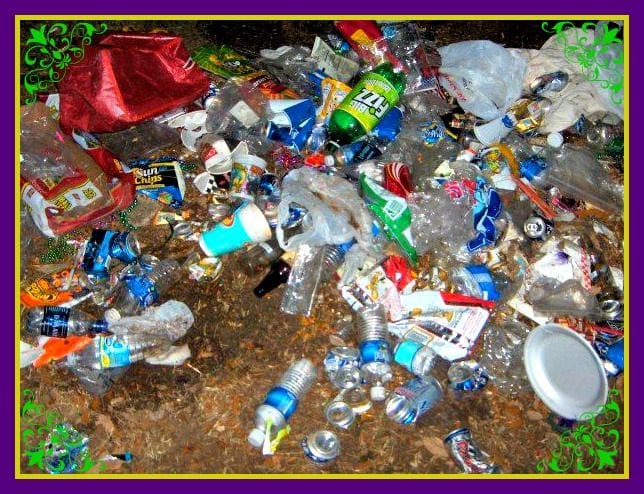 20.  It’s completely acceptable to drop your trash on the ground if there isn’t a trash can near or if the one by you is completely overflowing. You’ll see street sweepers and an impressive show of man-power out on the route literally minutes after the parade ends and they’ll take care of whatever you leave behind.

21.  Once the parade is finished, there will still be lots of loot on the street. Don’t pick it up! It’s bad luck. (In that same vein, many locals won’t touch beads that land on the ground for any length of time…there is no “five second rule” with respect to throws).

22.  Finally, and most importantly, you can find some of the New Orleans Moms Blog Contributors riding this year! Give us a shout out!

Old pros and locals … anything to add? 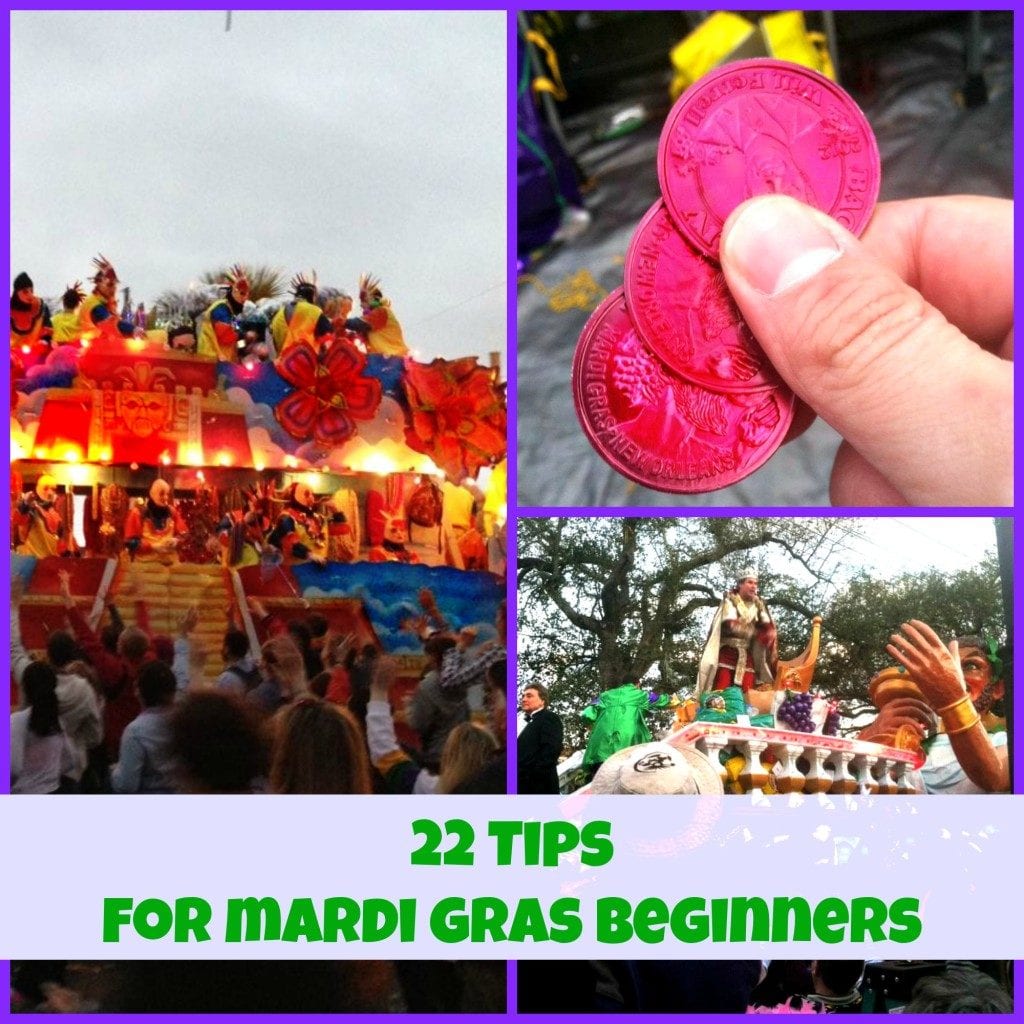 Mommy Truth: Why I Lie to My Children