If you have recently moved to New Orleans, Mardi Gras with kids can be extremely overwhelming at first. New Orleans Mom is here to help! Below are some of the best tips for Mardi Gras beginners and enjoying this New Orleans tradition with kids. While you shouldn’t plan to sleep a lot during Carnival season (yes, you need to let go of nap time), you should plan for New Orleans memories to last a lifetime. 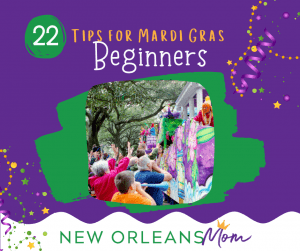 Moving to New Orleans took me by surprise in many ways, but one of the biggest surprises was Mardi Gras. Before I moved to New Orleans, I truly thought that there was just one parade on Fat Tuesday and that it took place on Bourbon Street. I never could have imagined seeing children at the parades, and I was convinced that you had to expose your body to receive beads of any sort. I couldn’t have been more wrong. New Orleans is incredibly kid-friendly, and there are tons of things to do in the city with kids. For those of you who may be new to our city and laboring under some of the same misconceptions that I was, these are my best tips for Mardi Gras beginners! I’ve compiled 22 pieces of advice to help you navigate the Mardi Gras season in New Orleans with kids like a native.

Getting Prepared for Mardi Gras With Kids

Old Mardi Gras pros and local New Orleans moms … what tips would you give to a Mardi Gras beginner?

In Defense of Silly School Days