Disclaimer: I tried to write about this in a way that didn’t make me look like an absolute raving lunatic, but it wasn’t possible, so I’m just leaning into it. If anything, I hope my distress makes someone laugh and lightens the heavy load of being a parent.

When you live with anxiety, there is always something to worry over. I like to say that SOMEONE has to worry about everything, so it might as well be me.

It started with a sweet smell

For a couple of weeks, my husband and I noticed that our one-year-old smelled strongly of maple syrup. It’s a pretty distinct smell that really can’t be confused with anything else. Our three-year-old would cup his baby brother’s face in his hands and take a good, deep whiff of the top of his head, proclaiming how much he liked to smell him. It was getting a little weird.

After a while, it seemed like syrup was all that I could smell. We had countless copies of a baby magazine lying around the house that also had a particular scent to the pages– they’re wipeable, chewable, untearable, and, well, faintly syrupy. We assumed that’s where the smell was coming from, but I was tired of smelling it, so I collected all the issues and put them away.

But the smell remained. And my obsession deepened.

I went through every food in the pantry and fridge, looking for fenugreek, which can also smell like syrup. I carefully read through all the labels, trying to find something in his diet that would make him smell this way. But there was nothing.

One night, unable to stand how strong the syrup smell was, I turned to Google. Y’all, I know better than to Google random symptoms. But I did it anyway, despite knowing nothing good to come out of it. Why does my baby smell like maple syrup?

Sometimes Google gives infinite explanations or a few possibilities that can be narrowed down, but this time, Google only had one answer for me: Maple Syrup Urine Disease.

Down the syrupy rabbit hole

That was it. That was the internet’s only reason why my son suddenly and strongly smelled like syrup. My anxiety took over. I fell down the rabbit hole, reading about symptoms and other cases and fully convincing myself my son had this incredibly rare but potentially deadly disease.

My sister tried to talk me down from the ledge when I shared my fears with her. She pointed out how he didn’t have any of the other symptoms, and how surely, even if this was it, we would find a way to make this better. My husband lovingly reminded me that we are not Menonites, who are the most likely to have MSUD. He also pointed out that it wasn’t our son’s urine that smelled like maple syrup, but all of him. Nothing added up for it to actually be MSUD, and yet…

The rational part of my brain tried its best to stop me from spiraling, but the anxiety won out.

I lost a lot of sleep, completely convinced my son was going to go into a metabolic crisis or worse. I waited as long as I could to not sound like the crazy parent, but I finally messaged our pediatrician, explaining that I understood how insane I sounded, but I didn’t know what else to do. A nurse recommended I bring my son in for an appointment, although I suspected it might also be an opportunity for them to commit me to a madhouse.

Right in front of me

Right before I sat down to schedule the appointment, I opened the pantry and caught an unmistakable whiff of maple syrup. WHAT WAS IT?! Right there, right in front of me, was a tin of vanilla and MAPLE flavored Crunchies… that had been sitting out on the counter for the past couple of weeks, escaping my frantic pantry search. I had always bought the cheddar flavored Crunchies for our baby before and hadn’t realized the flavor change, although I had noticed a recent preference for this snack– he loved them so much, he would rub them all over his face before eating them.

This would be the paragraph where I would explain the full depth of my embarrassment, but there are no words adequate enough for how stupid and ridiculous I felt. My face is probably still red all this time later. 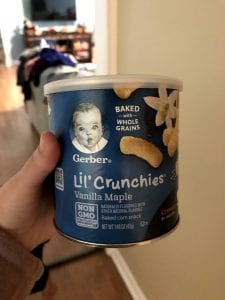 It was the most obvious thing in the world, and instead, I worried my brains out over the weirdest impossibility, but that’s what momming with anxiety feels like. At least I know that should my child ever develop MSUD or any other similarly rare disease, I’ll be prepared.

…Needless to say, we will not be eating pancakes, waffles, or anything else that requires syrup for a long, long time.

Time, Be My Friend

Why We Love the Levee