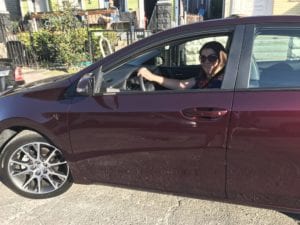 For quite a while now, we’ve been a Toyota family. I have driven a Sienna minivan since the boys were newborns, and we’ve had two Corollas. So when I was asked if I wanted a brand-spanking-new Toyota to drive for a week, I jumped at the chance. I mean, I love my minivan, but it’s so old it has a cassette deck, and my husband’s 2014 Corolla has lost its new car smell.

At first, I was slightly disappointed when they said I was getting a Corolla. “I know what a Corolla is like, we already have one!” But when it was dropped off, I got over it fast. This wasn’t the base model that we already had. This was the one with a sun roof! And a screen that did fancy stuff in the front!

Later that day, the boys hopped in the back and we went for a ride. Can I tell you how nice it is to drive a compact car when you’re used to a minivan? I never thought I’d give up the sliding doors, but being able to nimbly parallel park with the assistance of a backup camera is not a bad trade. 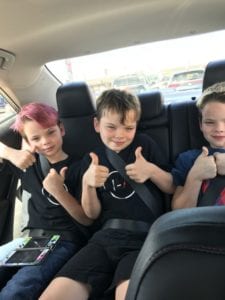 The next day, my friend Stephanie and I took the car to French Quarter Fest. Getting to park in a compact space was a nice change. And it was such an amazingly gorgeous day, I was thankful for the sun roof.

I spent the rest of the week tooling around town in the Corolla, even drove to and from Baton Rouge. And the gas tank never got to empty. I never really had a huge problem with the gas mileage my Sienna gets, but this was incredible!

My only complaint about the Corolla came on Friday. Which is when I had to give it up. I wasn’t ready to see it go! There were still so many buttons to figure out! So many gadgets and gizmos to test! So many XM radio stations still to listen to! So many miles left on that tank of gas!

I have almost decided that when my Sienna finally has to be put to pasture (which I don’t see happening for several more years) I just might want to get a smaller car instead. It’s hard not to get hooked on such a fun car with great gas mileage…

The Start of School, Then and Now

In defense of the minivan