Last night our impish Elf on the Shelf, Apple, made her first arrival of the year. The kids have been asking about her for at least two weeks and were excited and happy to see her. She brought them each a chocolate advent calendar along with a note. 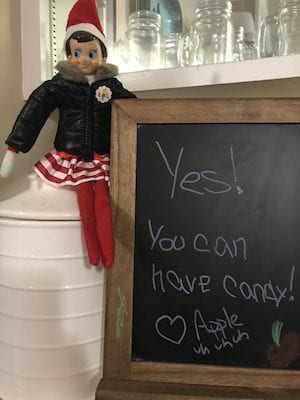 We’ve been asked that question 437 times since Halloween. She’s a stinker.

Every year someone sends me a link to naughty Elf on the Shelf ideas, hanging a lampshade on one of our favorite holiday traditions. Inevitably, I am sent a reference to throwing it in the trash, why it’s a bad idea, etc.

I get it. It’s too much pressure to do something elaborate with it every night. I don’t like to threaten my kids with “Santa is watching.” I always forget and have to explain why it didn’t move. My kid keeps touching it. The list goes on.

The Elf on the Shelf, like most big things, got largely popular and in your face before the inevitable backlash. I fully acknowledge it can cause undue added stress at a time when less is more. But we love Apple, our friendly scout elf, and look forward to her arrival each year. If you are dead-set against “that darn elf” I say to each their own. But if you like the idea, but aren’t sure if it fits with your family, here are a few tips to work it into your holidays without regret.

Keep the Message Simple (and in Line with Your Values)

As a parenting style, I tend to keep the “bribery in exchange for behavior” tactic to a minimum. Don’t get me wrong, there are times I exhaustedly offered five million dollars in exchange for five minutes of Stepford behavior. But I also don’t like the idea that there should be an external reward for internal choices. If we give a gift, it’s done out of love and for no other reason.

Putting aside the whole “Santa gives you presents if you are nice” discussion, Apple isn’t in our home to tell Santa if the kids behaved or not. At our house, Apple is their friend. They love finding her, talking to her, and her little hints of mischief. Occasionally they ask her to pass a message to Santa, but it’s rare, and it’s usually in case he didn’t see that one of them fell and got hurt that day. After all … he’s busy.

Don’t Set Yourself Up to Fail

If your Elf shows up on day one with home-baked cookies, covered in flour and spreading delight then day two isn’t going to be much fun if it’s just sitting on a shelf. At our house, Apple appears on December 1st with the kids’ advent calendar. It’s simple. The fun, for my kids, is in finding her. So we tend to keep the antics to a minimum. She hops around, peeks out, occasionally drops an ornament or swings from a toilet paper roll. But I’m not about spending an hour each night staging an elaborate elf setup.

If you are… great! Enjoy every minute of it. Honestly, I salute you. But if you just want your elf to move from shelf to shelf each night, do so without guilt. Your kids will still love it.

Some of you may have older children who no longer believe in Santa (they might enjoy hiding the Elf for their younger siblings). If you are like me and have one on the fence, adding an extra touch of magic is great. How did Apple fix that ornament I broke? Magic! How did Apple know I had a swim meet today? Magic! How did Apple make me smile as soon as I woke up and each time I saw her, even though my day was kinda blah? That’s right … magic. I personally love the touch of happiness Apple adds to the season.

At the end of the day, the Elf – like most holiday ideas – is a choice. Some of us dig it, some go all in, and some want to see it burned or trashed. If you are on the fence, I say give it a try! Your kids may love it enough to balance out the effort. Whatever you decide, find something simple to bring joy. Today and always.

Mammas, Let’s Take Ourselves Off Auto-Pilot

5 Things to Consider Before Putting a Pet Under Your Christmas...