Disclosure :: tasc Performance, a New Orleans based company, sponsored this review and sent another round of undergarments in exchange for my genuine opinion. However, I’ve been wearing their bamboo boxer briefs exclusively for a solid year now, and I won’t be turning back any time soon. If Santa wants to bring more, I’m game.

Why tasc Performance Underwear Is {Still} on Dad’s Christmas List

Almost 12 months have passed since I was first introduced to the tasc Performance underwear line, and I’m still a firm believer; a disciple of the Church of bamboo, if you will.  These products are worth their weight in gold, and I will never again go back to basics if I don’t have to. In 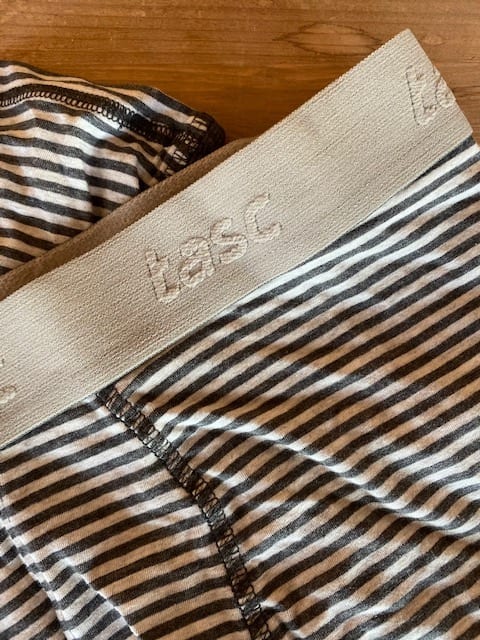 the words of the best pet detective out there, these underwear fit “like a glove.” I used to think that all underwear were created equally, but tasc Performance completely changed that perspective for me last year. I also used to think that underwear and socks were a boring Christmas gift, but now that I know what they cost AND have discovered an, ahem, higher-end and more luxurious brand, I am a-okay if Santa wants to put bamboo underwear under the tree. The tasc Performance underwear range from $28 to $38, so while I fully and strongly recommend them, it’s not an item of clothing that this frugal guy would be buying for himself on the regular. If you want to treat your man, they do run pretty true to size. Go on a shopping spree while you’re at it (this is one I am actually encouraging).

These are hands down the most comfortable underwear I have ever owned. Period. The boxer briefs are soft, breathable and have just the right amount of support. To be blunt, everything south of the border stays in place. You can wear them as part of your normal daily attire, and they are also durable enough to withstand the most challenging of workouts. The pairs I received last year have withstood backyard workouts, hours of yard maintenance, distance running, and regular daily wear. Turns out, bamboo is not only more environmentally friendly but it’s breathable, durable and extremely comfortable. You can learn more about the upside of bamboo on the tasc website if you’re interested. I was surprised at what a difference the feel of this material made as compared to my old underwear, but it’s remarkable and noticeable, guys. Get you some here.

Shifting gears to the new tasc Performance undershirt, now. In full disclosure, I am generally not an undershirt kind of guy as to me it is another layer of clothing (who needs that in Louisiana?) and the fabric isn’t as comfortable as the outer layer material. But, if I were to compare the tasc undershirt to the traditional undershirt of old, like the ones that Michael Jordan is paid to rave about and the one that cousin Eddie sports while visiting the Griswolds over Christmas Vacation, I would give tasc the nod by a wide margin. As with the boxer briefs, the bamboo fabric is very breathable, form-fitting (but yet not constricting), and the garment is soft on the skin, just like the traditional tasc workout shirts that I use daily. This is a good option for loungewear as well. While I wouldn’t personally wear one every day, I can fully see why this undershirt is superior to the previous options of my childhood.

Put tasc Under the Tree This Year For Dad

So in conclusion, the tasc Performance family of undergarment products are game-changers. In addition to the stellar construction, consumers receive the added benefit of knowing that these products are manufactured in a way that is more environmentally friendly than traditional cotton or synthetic garments, and I am supporting a home-grown New Orleans based company. Twelve months ago I had my mind blown when I was first introduced to the tasc boxers and boxer briefs. And believe you me, your man will be, too, if you stuff his stocking with a few pairs of underwear or undershirts from tasc. Cotton is like, so 2018, so upgrade your loved one’s wardrobe with the gift of tasc Performance.

It’s also worth noting that tasc Performance makes far more than undergarments; both men and women alike would be able to enjoy a tasc Performance gift card, and I have been wearing nothing but the Carrollton Performance Crew to exercise or lounge around the house for the better part of a decade now. Take a look around the website and stock up for the active folks on your holiday shopping list!

Saving My Sanity With My 7 Year Old Son

Why I Chose Single Sex Education For My Children