In January 2021, a friend sent me a daunting-looking PDF with over two thousand empty squares and the challenge: declutter 2,021 items from my home in one year. 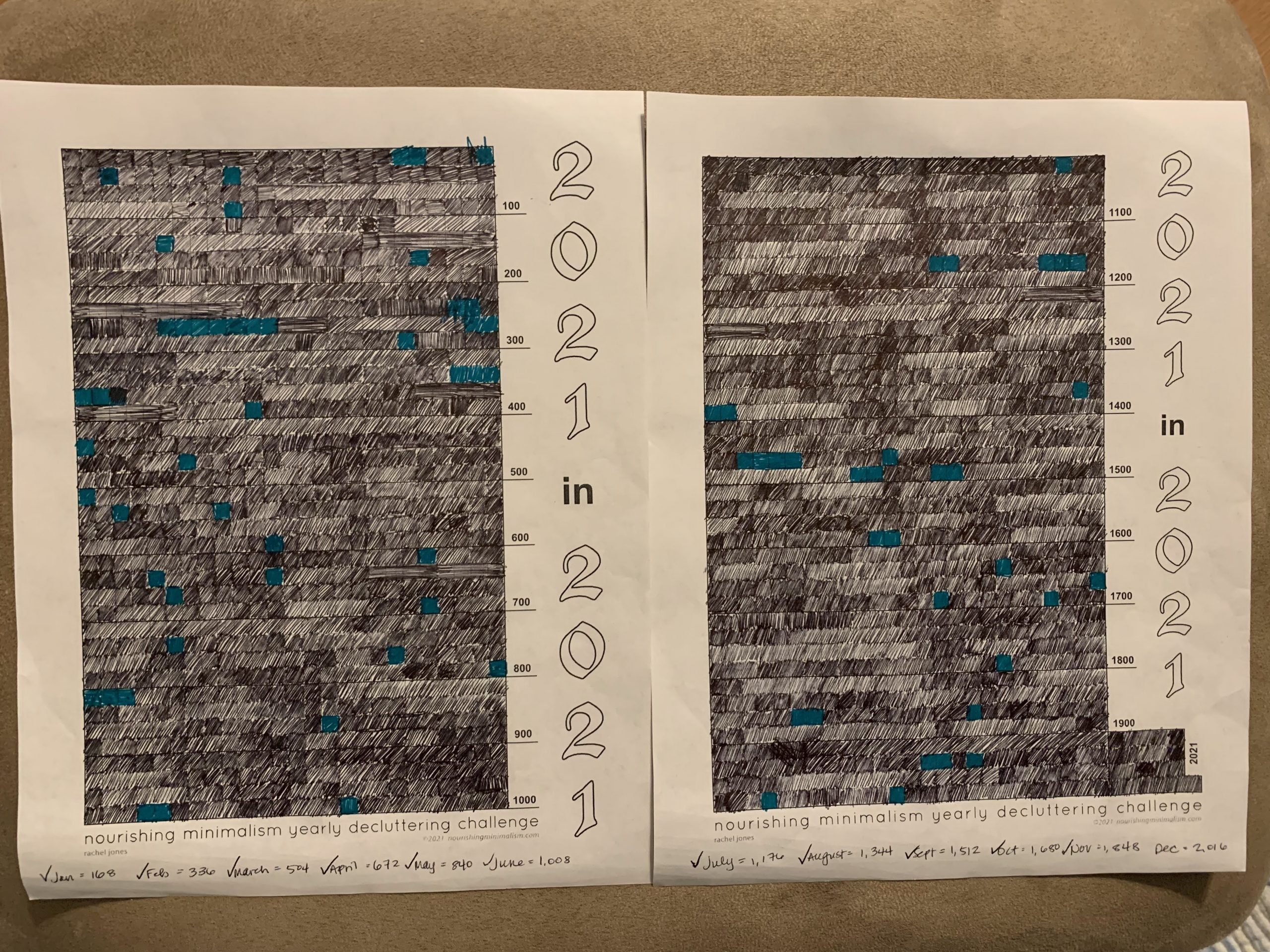 I wouldn’t call myself a hoarder, but I do hold onto things – especially things I have a sentimental attachment to. Let’s call me an emotional hoarder. My husband is a “just in case” kind of guy. He’ll hold onto anything and everything “just in case” he can use it for an as of yet unnamed, imaginary future project. We both suffer from “flat surface syndrome,” where if there’s a flat surface nearby (countertop, table, dresser…), we’re going to pile things on it instead of taking the time to put it away. Add in three kids’ worth of toys, gear, and general stuff, and it’s easy to feel like we’re drowning in clutter.

I’d been on a decluttering kick for a while, trying to salvage my sanity by removing unwanted items from my house and clearing my mental and physical space. But a formal challenge with over two thousand items? It felt impossible, but I know myself. I am HIGHLY motivated by lists, tracking data, and physically seeing progress. It was the squares that made it possible for me. Coloring in each of those squares as item after item left my house fueled me along for the entire year.

And guess what? I DID IT.

Rather, I should say, we did it. Even my four year old pitched in: 81 of the decluttered items were his own decisions. We learned so much about ourselves, the items we value, and what we truly need and don’t need during this project. Here are some quick tips and what we learned this past year:

It’s not perfect, but it’s SO much better.

Now, no one who walks into our house would look around and think, “Wow! Surely this is a minimalist’s home!” You wouldn’t even think, “Wow! This home sure is clean!” (Clean and decluttered are two different things, my friends. I am still working on the daily cleaning part.) But when we were cleaning our house in preparation for hosting Christmas this year, I noticed: cleaning our house went a lot faster than it did last year. There were fewer items to put away. There was less clutter to hide. Seeing that difference made it all feel so worth it.

The whole project was, in a word, freeing. The crazy thing is, after we placed our last item in the donation box, I felt like I could keep going. There are still areas in our house that need further decluttering. There are still so many more items to go!

I could write pages on this topic and talk anyone’s ear off about how we completed the project, but hopefully these basics are helpful to anyone who wants to start removing some of the clutter in their own homes. If you want to try this challenge for 2022, grab some boxes and start your decision making today!

The Third Kid: Fact or Fiction