Anyone who knows me knows that I absolutely HATE cooking and meal planning. It is the bane of my existence and the last thing I want to do after a long day at work. I don’t enjoy cooking, and I’m not very good at it, but I also don’t like constantly spending money on eating out or how I feel when I’ve had a ton of takeout, so I do my best to plan balanced, healthy meals for my family. I’ve learned that while my preference is for a hot, home cooked meal, I need to have some easy fallbacks for those days when I am just wiped out. As a teacher with my own school-aged children, my entire menu consists of these easy meals for the first two or three weeks of school, at least until we get into a good routine. Here are some of my family’s favorites:

While I’m all about making dinner as easy as possible, I also try to make dinners relatively healthy. Chicken Caesar Pitas are super quick and healthy even though they are made entirely from prepared foods I can grab from the grocery store on the way home. You need Pita Bread, a Caesar Salad Kit, A Rotisserie Chicken, and extra parmesan and Caesar salad if you’d like. Shred the chicken, and stuff the pitas with a combination of the chicken and the salad. I usually serve these with sliced sweet peppers and hummus. 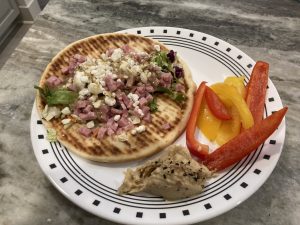 “Greek” Wraps are also a quick and healthy option. I’m not sure how authentically Greek these wraps are, but they are easy and delicious. You will need pita wraps, diced ham, feta cheese, Greek Salad Dressing, and either shredded lettuce or a bag of romaine lettuce. Throw a little bit of everything on top of the pita and enjoy. I also serve these with pepper and hummus, or sometimes I’ll toss some frozen French fries in the air fryer and add some Greek Seasoning.

This meal is a little more involved, but still pretty easy, even after a long day. I found this recipe in a recipe book that came with a slow cooker purchase years ago. I no longer have the slow cooker, but I still use the recipe; I just use a pan on the stove. You need ground meat of your choice, chopped onions, garlic (I used the cans of minced garlic), ginger (I just use the dried seasoning), soy sauce, and hoisin sauce. I leave out the sriracha, water chestnuts, and cilantro because of the different preferences of my family members. Also, while the recipe calls for bib lettuce (which is delicious), I always have romaine lettuce on hand, and we’ve found those leaves work just as well. I usually serve this with a bag of steamable edamame. I also usually double the recipe so that I have some leftovers for lunches. I also like to mix the meat with ready rice and leftover edamame.

My husband and I both love salads, but our girls aren’t big fans of foods touching each other (they grow out of that, right?), so on nights we want to do salads, we “deconstruct” them for the girls. For example, instead of putting a cobb salad in front of my girls, they each get all of the ingredients on a plate: a hard-boiled egg, some diced ham, some bacon bits, shredded cheese, chopped cucumbers, grape tomatoes, and honey-mustard dressing.  They are also fans of Summer Salads, which consist of diced strawberries, blueberries, mandarin oranges, mozzarella cheese, nuts, cranberries, and poppy seed dressing.

Years ago, a friend gave me a quick recipe for black bean soup. I’ve made it so often that I’ve memorized the recipe. It’s very similar to this recipe, but I use a cup of salsa instead of diced tomatoes. We always top the soup with sour cream and shredded cheese and serve it with quesadillas. I even save time by baking the quesadillas in the oven instead of cooking them one at a time on the stove: place shredded cheese on half of a tortilla and fold over; stick the quesadillas on a baking sheet and bake for about 10 minutes, carefully flipping halfway through. 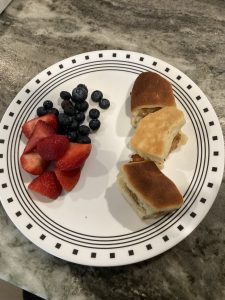 Just a few months ago a fellow mom shared that the Members Mark Southern Style Chicken Bites from Sam’s were a suitable knock-off for Chick-fil-a chicken nuggets. The next time I was at Sam’s, I grabbed a bag, and that weekend I tossed some of them in the air fryer and popped a tray of Sister Schubert Rolls in the oven. Viola, I had a pretty delicious imitation Chick-n-Minis. Of course, these are great to have on Sunday mornings when we can’t get a real Chick-fil-a fix, but they also make a great breakfast for dinner option. I usually serve these with pre-cut fruit.

This was a staple when I was growing up and is a favorite of my own family’s. You just need a bag of frozen meatballs, some spaghetti or marinara sauce, parmesan and/or mozzarella cheese, and some sub rolls. We like to either get the top slice hotdog rolls (also a great choice for not-as-sloppy joes!) or Hawaiian rolls for meatball sliders. You can cook the meatballs and sauce separately, or you can just toss them together in a pot and simmer on low for about 20 minutes until the meatballs are warmed through. Serve the meatballs and sauce on the rolls and top with cheese. I usually serve this with a steamable vegetable bag and some apple sauce.

My Grandma makes the best tuna casserole. When I was in college, I was craving her tuna casserole, but I was limited to a single pot and the dorm kitchen, so I got creative with a box of kraft mac and cheese, a can of tuna, and a can of peas and carrots. It wasn’t exactly my grandma’s tuna casserole, but it was pretty good and became one of my broke college student staples. Nowadays, I use it to add some protein and veggies to the diets of the mac and cheese addicts I live with. Just cook a box of mac and cheese per the directions. Microwave and strain the cand vegetables, and mix them in. Strain the can of tuna, and mix that in as well. Baby carrots or some fruit make a great side for this dish. And if you’re not a tuna fan, you can use canned chicken or even some seasoned ground beef or turkey. 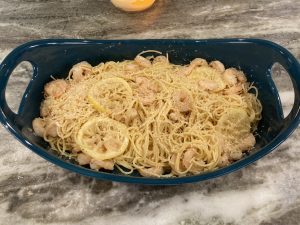 A fellow New Orleans Mom recommended this dish to me, and it has become my oldest daughter’s favorite. She asks for it weekly. You just need butter, shrimp, lemons, and a packet of Italian seasoning. I buy the frozen shrimp and just thaw it under some running water and pat it dry before adding it to the baking pan. (I’m sure that’s a major foodie faux pas, but it works for me!). I also usually add some asparagus to the same pan so it can soak up the butter and seasoning along with the shrimp. When it’s finished cooking, I put the asparagus on a platter and pour the shrimp, butter, and lemons over some cooked spaghetti noodles and top it with some parmesan cheese. In addition to the asparagus side, I usually serve this with some garlic bread.

My husband and I live far away from both of our extended families, so holiday meals are often just the four of us. As much as I love big holiday meals, I do not have any interest in cooking one all by myself for just four people, so I figured out how to simplify things while still hitting all of the essentials. While I usually do a little bit more for the actual holiday, like making Green Bean Casserole instead of just serving green beans, it’s fun to do this meal any time of the year. Typically, I sear a ham steak on the stove with some brown sugar and serve it with canned green beans and some Hawaiian rolls. If we’re especially hungry, I’ll add some mac and cheese or instant mashed potatoes, and I always add a can of cranberry sauce even though I’m the only one who will eat it.

Reindeer Games: Addressing the White Elephant in the Room