I repeated that phrase over and over the first few weeks after my son’s birth. I think the more I said it, the more I hoped to believe it myself as I tried to convince others that I was fine.

But I wasn’t fine. I was far from fine. 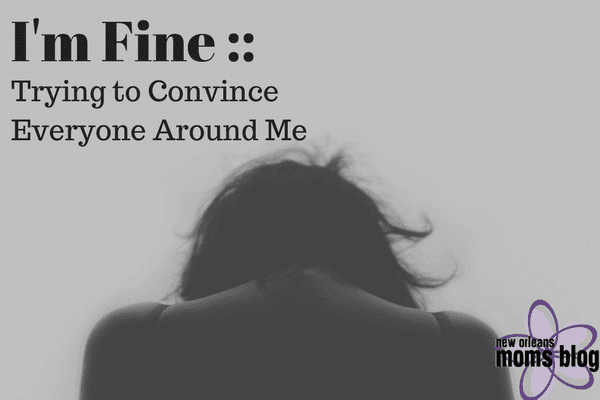 I just delivered my third child over 3 months early. And you would think having done this once before already it would have been easier. Boy, was I wrong!

When I was told that my OB already had the operating room being prepped before she even told me we would be having an emergency c section, I was hysterical. I felt physically ill. My husband told me that during the surgery and the night following, all I did was shake non-stop. Maybe it was the continuous medicine that was being pumped through my body to avoid a seizure or maybe it was my nerves. Either way, I wasn’t fine.

I tried to hold it together for everyone around me. I didn’t want my husband to know how scared and anxious I was. When I would FaceTime my 4 and 8-year-old sons from the hospital, I would put a smile on my face so they wouldn’t see the fear in mine.

When the doctors and nurses would come in and out of my hospital room, I would be polite as I could and rate my pain for them. Sure, my pain physically was high, but also my mental state was high too. “I can’t break down” is what I would continuously tell myself. I didn’t want anyone to see me weak and broken. I needed to be strong. I needed to be tough. I’m fine. I kept on telling myself this. I wasn’t fine.

Because of the medication I was taking, I wasn’t able to visit my newest addition until the day after his birth. I was dying to see him and even more so wanted to hold him. While my husband wheeled me over from my postpartum room to the NICU, my nerves began to get the best of me. I was scared. I was anxious. As much as I wanted to see my son, I felt tremendous guilt of the current state he was in. I wasn’t fine.

The first time the NICU nurse took him out of his isolette and handed him to me, I started weeping uncontrollably. I’m sure he thought I was a mental case. Just seeing how frail my baby was with his tiny little body hooked up to all these wires was awful. It was all my fault. The guilt just consumed me and the tears came pouring out. I failed him. I failed US.

Before discharge, my OB realized I really wasn’t fine. I broke down and admitted it. I was FAR from fine. I needed some help. She reassured me it was okay to feel this way and that I didn’t fail myself or my baby. Preeclampsia was out of my control, and there was nothing that I did to cause this.

We worked on a patient plan and things started to get better. With lots of help from my husband and family, I’m on my way to being fine even months later. We survived my son’s NICU stay and while having three kids is not for the faint of heart, we are making it day by day.

When Your Family Vacation Doesn’t Go As Planned