Twenty years ago, I met my soul mate. No, not my husband (sorry, dear.) I wouldn’t meet him for another five years or so. I’m talking about my best friend, Kristina.

She was in New Orleans visiting a mutual friend, and within minutes of meeting her, I was crying laughing, and by the end of the night (and many hurricanes at Pat O’s later – it’s fine, we were 21 and could handle it) we were best friends 4eva. Since that night, we’ve been through so much together. Living abroad together, living in Louisiana together. She even moved in with my mom and I after my dad died. We’ve been through questionable boys and hair together. She hates running, but when I started running to train for my first marathon, she ran alongside me. We were the maids of honor at each others’ weddings, and we talk on the phone nearly every day.

There’s something to be said for having a female best friend as an adult. Someone who you aren’t married to, and who knows all of your darkest secrets. Things you’d never tell your spouse (again, sorry, dear.)

One of the best things about Kristina (Kiki to the boys) is that she doesn’t have kids. She and her husband chose not to have any, so they can do fun things like travel and eat at fancy restaurants and buy my children expensive gifts. If you can find a best friend without kids, I highly recommend it. At first, I was disappointed that she didn’t want to have kids. I was worried that we’d drift apart as our life took different directions, but luckily, that hasn’t happened at all.

When I was found out I was pregnant, she was the first person I told (um, again, sorry dear!) I was standing in my bathroom, staring at the second line on a pregnancy test, shaking like a leaf when I called her to tell her. Later, when we found it it was not one baby, but three, well, okay, she didn’t believe me at first, but who can blame her? She flew to New Orleans a few times during my pregnancy, helping with my baby shower, and at the very end, organizing the nursery. 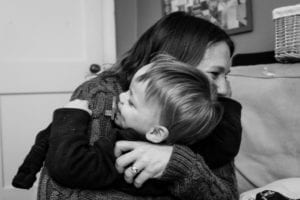 When the boys were six months old, our friendship went though its toughest test. I had a work trip in Texas, and had no choice but to bring the boys with me. She came down to help. Our plan was to drive to San Antonio in two days, then she would watch the boys while I had my work commitments. The stomach bug we all got the day before should have been the first sign that this was going to be the trip from hell.

Screaming babies, a raging case of strep throat (for Kiki), more screaming babies, no sleep, and did I mention screaming babies? made it almost unendurable. On the way home, we expressed our surprise that our friendship was still intact. A trip like that would have tested a weaker bond, but we can now laugh about that awful, awful week.

Over the years, she has come down to help with birthday parties (we still laugh about the terrible cake pops we made for their third birthday) and when I had major surgery, she stayed with us for a week until I could get back on my feet. She and I have taken the boys to the beach for a week – can you imagine voluntarily going on vacation with three small boys that aren’t your own? And we’ve done it twice!

Everyone should have a best friend like Kristina. Someone who is with you through thick and thin, who knows your deepest, darkest secrets, who loves your children no matter how much they scream, and who can still make you laugh until you cry.

Eight is (not) great