I may have mentioned this once or twice, but I have identical triplets. Ever since they were babies, I have resisted dressing them exactly the same (the image of three children that look the same and are dressed the same makes me hear horror movie music in my head) and have tried to foster independence as much as possible.

When they were babies, when I truly struggled to determine their individual personalities, I took each on a trip with me. It was a chance to flood them with one-on-one attention and to truly be able to focus on one child. Really get to know him, as strange as that sounds. People would ask, “do they have different personalities?” and I would indigently retort, “of course they do!” but heck if I could tell you how they were different.

My resolve not to dress them the same kind of went out the window when they started preschool because they wear a uniform. Their teachers and the school administrators got used to learning which color shoe each boy wore. In PreK-4, we put them in separate classes. 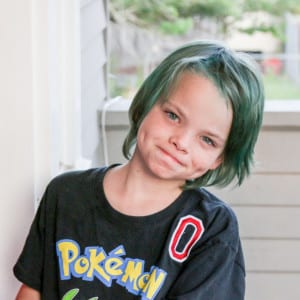 But there’s only so much you can do to make three children with the same DNA distinguishable.

So when Oliver asked me if he could dye his hair blue, I immediately said yes. (Though I did draw the line at bleaching it first so it could be the bright turquoise of a YouTube star he first saw it on. And it ended up more aqua than blue.)

The stranger that sees my little blue-haired boy walking next to me at the store might make assumptions about him and me. That he is some kind of troublemaker and that I’m a pushover. But what they don’t know is that Oliver is a total rule-follower and made me check with the school before we did it. And my parenting style is, if no one’s getting hurt, why not? (Also I have a blue chunk of hair. But that’s my midlife crisis hair, totally unrelated.)

When I see Oliver with his blue hair, I see a brave boy who wants to stand out from the sea of triplets he looks like. Who doesn’t mind that he might get stares, even though he’s a pretty shy kid. Who doesn’t mind being different. Who wants to be different. And that makes me a very happy mama. I worried so much when the boys were infants that they would suffer from identity crises as they got older, and people struggled to know who is who. But I no longer worry.

Only in New Orleans … #NOLAmomprobs