My husband Jeff will be alone with our 22 month old son Ben for five days while I am in New York City visiting friends and hosting a bachelorette party. This is the first time Jeff has been alone with Ben for more than a couple of days at a time. Yesterday, I was telling him that I had a blog post due shortly after returning from the trip, and that I would like to have written before I get home. He suggested that I write a post predicting what will happen when I am away. 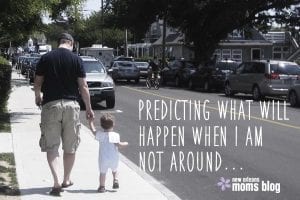 I thought that was a great suggestion, so here are my predictions about what will happen when I am not around for five days:

Women will roll their eyes at Jeff.

Why? Because when Jeff watches Ben he refers to it as “baby-sitting.” As several women have pointed out to him, it’s not baby-sitting when he’s your child. It’s called “parenting.”

Ben’s clothes will not match.

The last time I left my boys together for a couple of days, I laid out outfits for every day with specific instructions. When Jeff would send me pictures of Ben, I would immediately think, “What the heck is he wearing?”

They will eat dinner at my parents house EVERY night.

My mom will be watching Ben during the day while Jeff is at work. I predict that every night when Jeff picks Ben up from work, they will eat dinner with my folks. I’m not saying that there is anything wrong with this (I would probably do the same.), I’m just predicting it will happen.

Ben will not be bathed.

To be fair, bathing Ben is mostly Jeff’s job. Since I take care of Ben all day, I delegate this responsibility to the hubby. It used to be no big deal, and Jeff would bathe him a lot. However, Ben is now a terror in the tub. He takes “splish splash I was taking a bath” to a whole new level. You can’t escape from bathing him dry. And he throws a tantrum every time you take him out of the tub. Because of this, Jeff isn’t too eager to participate in bath time and usually only bathes Ben when I force him to.

Ben’s bedtime will be pushed up by one or two hours.

Ben usually goes to bed between 8:30 pm – 9:30 pm. I predict that, without having me there to share in the nighttime duties, Jeff will have Ben in bed by about 7:30 pm every night so he can have a few hours of uninterrupted web-surfing and TV-watching.

There will be a misunderstanding that leads to a wild and crazy adventure.

I predict that there will be some sort of Three Men and a Baby/Adventures in Babysitting misunderstanding that will lead Jeff and Ben on a movie-worthy adventure. Maybe Ben is a doppelganger for a crown prince and they accidentally switch places for five days. Jeff will run around town searching for Ben and get into lots of odd situations – stealing a car, entering a beauty pageant, and singing the blues to get out of trouble. They will be reunited only FIVE MINUTES before it’s time to pick me up from the airport! Or maybe Jeff will accidentally pick up a package filled with stolen diamonds instead of the his intended package filled with sensible vitamins and chaos will ensue. I call this movie, “Vi-diamonds.”

So how accurate were my predictions?

Well, I got about half right. Jeff and Ben ate dinner by my parents’ house every week night while I was away. Ben’s bed time was pushed up and he only got one bath. But his clothes matched (as far as I could see), and unfortunately there were no kind of movie-worthy hi-jinks. As far as women rolling their eyes at Jeff? Who knows? But I think Jeff has learned his lesson that watching Ben while I am away is simply called parenting. And a great opportunity to bond with his son.

Edit to add :: I was so focused on just reporting on the accuracy of my predictions, that I neglected to mention that I returned home to a spotless house and an extremely happy child! I’m lucky to have such a supportive husband, and Ben is lucky to have such a loving dad.

So, what do you think would happen if your spouse was left alone with the kids for almost a week?