When we first got married, my husband Ryan worked a typical job, 8am to 5pm or whenever he was finished. Through the years, he worked with different companies so sometimes that differed a little. Whether he worked more sporadic hours or on call, he was usually gone most of the time. Then a couple of years ago, we decided to open a small business which meant before too long, he would be working from home. I am a stay at home mom so I’m already home most of the time. Most people ask how it is with both of us working from home.

It has its days, but honestly? I love it!

I have gotten spoiled so that when he went back to working a more traditional 8-5 job, I was so sad. I actually missed him a lot more than I thought I would. Now don’t get me wrong, it wasn’t like we were frolicking all day. We both actually had things we needed to accomplish, but him just being there was such a treat. He would usually eat breakfast and lunch with us and then pop in and out as necessary throughout the day. It was also really helpful when myself or one of the kids had an appointment. This meant that I could go solo or take just one kid instead of all three. 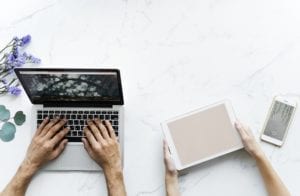 Did he drive me crazy?

Absolutely! But that is marriage, right?? He has his quirks and I have mine. I also had unrealistic expectations when we first transitioned to him working from home. I thought maybe he would let me sleep in and deal with the kids. Or do school one day while I went to the spa. Haha! Boy, was I living in a fantasy world. Once I accepted that he was home to actually work and run a successful business, then I was good to go. It’s all about keeping those expectations in check.

He has since gotten a traditional job, but we do still have a small business that we work together on. Working with him and helping him to accomplish his dreams is the best feeling ever! I really enjoy watching him in his element doing his thing. And listening to him boss me, his minion, around isn’t the worst thing ever.

Both spouses working from home isn’t an option for everyone; it doesn’t also work for everyone either. This was our experience and I really enjoyed it!

Our {Almost} One Year Old Has A What??

One Mom’s Take on Three Kids Versus Four Kids