I’ve been flirting with the idea of cutting my 3 year old’s hair to a bob or shorter. It’s at her shoulders with adorable curls and bangs. She can rock the pigtails and braids. It’s really lovely … when brushed. The problem is that she never lets me brush it without bribery. Even the copious application of No More Tangles spray and promises to be gentle are not enough to overcome her adamant “no brush hair mommy!” 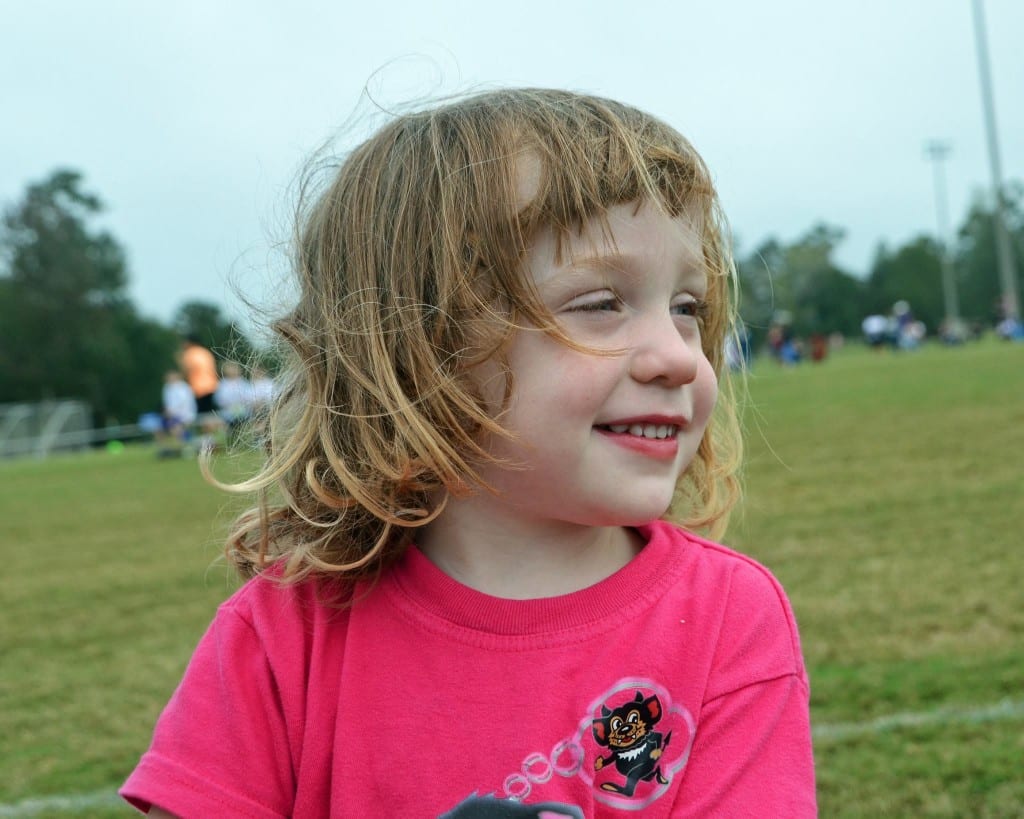 So, while we keep her bangs trimmed, inevitably there are giant strands that get in her face and her eyes. Most mornings I end up sending her to school with a bouffant rat’s nest in the back and at least long strands over her face. I cringe each time because of course isn’t child grooming a basic maternal obligation?

I mentioned my plan to my mother. She was non-committal. It’s worth noting that when I was 3, in the 70s, not many kids had long hair. It’s also worth noting that I didn’t have long hair when I was three. Dorothy Hamill was ascendant and the bowl cut was in (and awfully easy. Coincidence?) I didn’t have long hair until I was at least 8 or 9 and even then, it didn’t last long. I don’t remember if I had less patience with it or my mother did, but either way, it was gone by 3rd grade. To this day, I think I’ve had long hair for maybe a total of 3 years out of my life.

I’d hoped that my mother would be enthusiastic about my plan. Who better to give me a thumbs up than the woman who’s been a short haired lady herself for many years? I think her decision to chop it all off was due in part to the famous episode at Hershey Park when the gravity ride went so fast all of the bobby pins in her bun fell out. I thought it was hilarious. I don’t think she did.

What I didn’t factor in was that times are different. Different as in, I’d like to think that moms in the 70s gave themselves a little more slack when it came to kid grooming. They just put the bowl on the kid’s head and cut accordingly. Of course, this was only when they found time in between drinking Tab and watching their soaps while they locked the kids out all day to play (for the record, my mom worked and she was not a soaps person). This is not possible today, not unless you want to bring the ridicule of the internet down on your kid’s bowl cut head. And have someone call child services on you for locking your kids out all day.

It’s also different in that long hair for girls and women is back in. Just watch Olivia Benson on Law and Order SVU and you’ll know the hair barometer. She’s been growing it out since at least 2010. Gone are the 90s pixie cuts. All of the little girls at my daughter’s school with the notable, awesome exception of one girl have long hair. I continue to love my pixie cut.

I finally brought up my idea with husband. He has never had long hair in his life and now is lucky if there is a half inch. He wasn’t thrilled. As he put it, it doesn’t seem to bother her. And he’s right.

His disapproval reminded me that the person who had the biggest problem with her hair wasn’t the child, it was me. Since it was essentially my problem, I stepped back and evaluated my plan. I realized that there were easier solutions than the drastic chopping I had been contemplating. I just needed to make two adjustments: I changed her shampoo to one with a better conditioner and I decided to chill out when it came to the opinions others of my mothering based solely on the condition of the three year old’s hair. So far the new shampoo is working wonders.

Breaking The Cycle: I Was Raised by a Narcissist