If you have recently moved to New Orleans, welcome! New Orleans Mom prides itself on being the premier parenting website for New Orleans, and we have dozens of tips for enjoying Mardi Gras with kids. While sleep is about to go out the window (yep, you need to let go of nap time), you’re about to experience all the magic, memories and king cake. New Orleans Mom has compiled 22 tips for enjoying Mardi Gras as a beginner, a list of insider tips from the parade route, the 10 king cakes in New Orleans you have to try and even how to make an easy king cake at home with kids.

The Virgin Diaries: My Thoughts Prior to My First Mardi Gras

Truthfully, I can’t really fathom what all this Mardi Gras business is about. My one and only major parade experience was when the Miami Heat won the championship. My husband forced me to go to the huge downtown parade on the basis that his beloved team may never win again. Once in a lifetime opportunity he said! Well, it was once in a lifetime for us and every other sweaty person Miami had to offer up. It was about 100 degrees and the lady to my right was breastfeeding her infant against my arm. My husband wondered out loud if her milk would curdle on contact with the air it was so hot. I ended up cutting off my capri pants into shorts because I felt like I was about to stroke-out due to the insane amount of heat radiating off the asphalt. That parade was not my idea of a good time!

You now understand I am skeptical about parades, but let’s talk about New Orleans specifically. Am I expected to believe that an entire city takes a week off and parties in the colors of purple, green and yellow (yes, I know it’s gold but that 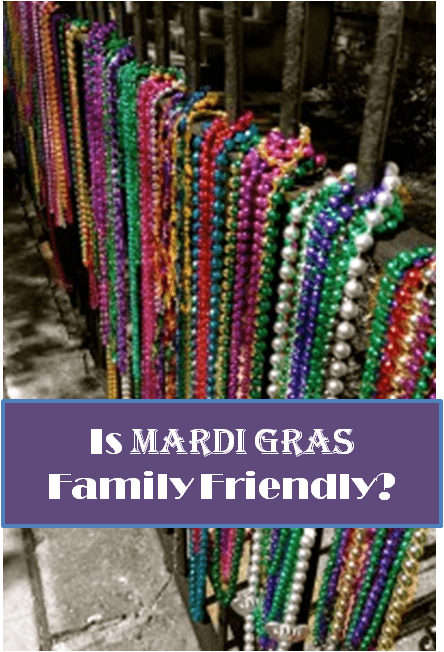 bright, big bird color really looks more like yellow to me)? For starters, fashionista I am not, but in my opinion those colors do not go together! Then let’s talk about these boxes that people are posting photos of on Facebook. You know, the ones that are perched atop a ladder? Yeah, is this shindig going to be so much fun that I am going to want to purchase a hulking piece of equipment to perch my child upon? Or is this really for their safety? To shield them from the massive party beneath them? Or am I to believe you really went to all the trouble of purchasing (or BUILDING), then hauling, this monstrosity to your chosen place just so your KID can catch some beads? Hmmm…..

On a more serious note, I honestly do have reservations about the safety of these events. Will there be massive crowds? Lots of flashing and craziness? Part of me wonders if I should stick to the Metairie parades, which I have been told are very calm and easy to attend. The more adventurous, experience loving side of me knows that it will be worth it to venture out and experience the real deal Uptown parades. I would also like to thank you in advance, yes YOU, the readers! When the New Orleans Moms Blog asked you what a Mardi Gras novice such as myself should know, it overwhelmed me the number of you that wrote I should bring toilet paper. Of all the things I imagined packing, never would I have chosen toilet paper! Many of you kind readers also mentioned paying to use a bathroom, and I assure you this is a luxury I am willing to pay for. I may have some residual PTSD after a little occurrence in France where I had food poisoning and not a soul would let me use their restroom.

I Went, I Saw, I Partied: My Actual Mardi Gras Experience

Our very first Mardi Gras experience was accidental. Our house was stricken with the dreaded flu. It was a Sunday, so we headed to the urgent care to make sure poor Weston didn’t have an ear infection as well. As we exited the Urgent Care we realized that we were indeed at our very first parade, Little Rascals. Weston, still clad in his PJ’s from a bad night, perked up long enough to catch his first beads, and it might have been right there that our love for Mardi Gras began to grow.

The next weekend we ventured out for not one but two days of Uptown parades. We packed, as instructed, nearly our whole house and headed towards St. Charles. Chairs and coolers in tow we lugged our belongings right up to the edge of the street and were practically invited to sit up front by the friendly patrons. Let me just say in Miami, no one invites you to sit in front of them, quite the opposite actually. We picnicked under the Oaks and sipped ice cold beers while visiting with friends. It was festive, it was friendly; it was a great time. There was nothing that felt unsafe (except maybe the ladders) about these parades. There was nothing uncomfortable about our experience. The crazy color combo of green, gold (I give in!) and purple even kind of began to grow on me. Looks pretty when you’re all wearing it in solidarity!

This past weekend, as the Mardi Gras festivities seemed to accelerate, we set our sites Uptown and hit up Magazine Street (this was back in 2013, to be clear) with friends. Just when I thought I had come to terms with being a “Neutral ground kind of girl” things were changed up on me and I had no choice but enjoy the sidewalk. I was curious to see if the closer to Fat Tuesday we got, the crazier and less family friendly things would get. Sure there was quite a bit of drinking but it seemed for the most part everyone kept their wits about them.  I am happy to report that things were more family friendly than ever! At one point a little boy threw up and random parade goers made sure he was ok and then helped to clean up the sidewalk so no one would step in it (as the girl who would have for SURE stepped in it, I for one really appreciated this). Later in the day I observed a little girl that broke her prize set of beads. Her face 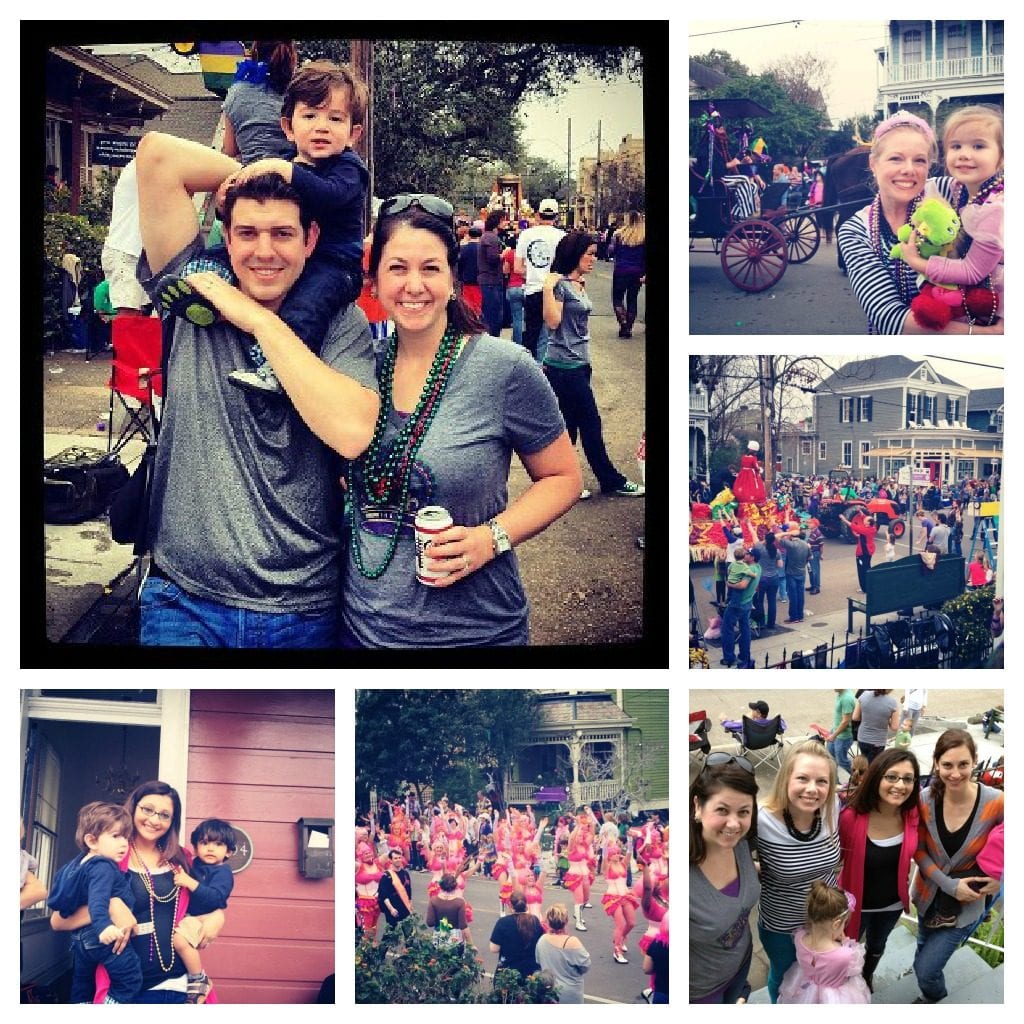 immediately melted into a look of despair.  A nearby father, unrelated to the girl, ran over to give her his identical set of enormous beads. The same girl later paid it forward by giving one of her prized catches away to another little one. Talk about life lessons at the parade!

Please don’t hate me, or think that I am judging you, but I am going to be honest and publicly admit I am not sure I can ever put my child on a ladder. I know this ladder thing is kind of like putting water in the bathtub to some New Orleanians during Mardi Gras, however this nervous Mama just can’t handle it. When I saw the rows and rows of ladders, sometimes 10 deep on Saint Charles, I pictured a large set of dominoes toppling over sideways. Despite my mental domino-esque imagery I have learned in my life to never say “never.”  Who knows how I will feel about this in the coming years as my boy becomes more capable of defending his teeth from beads. My ladder apprehension aside, I am really now enamored with Mardi Gras. I was lucky enough to have a close friend fly up from Florida with her little girl to experience their first Mardi Gras. I found myself so proud to show her what a fun and amazing time the parades were. Her little girl’s face when she caught her pink feather boa is one that I will never forget. Nor will I ever forget dancing in the streets alongside my family, my dear old friend, and my new found New Orleans friends with their beautiful babies. This event is truly not about the beads or the party but instead it is about the  feeling  of fraternity, happiness, and unity in the quest for a great day of festivities and unforgettable memories. NOLA, my friends, truly knows how to have a good time. I think I’m falling in love with this city…

To Work or Not to Work: THAT is The Question {from...

Recap of the New(ish) to NOLA Dinner at the Hard Rock...