I wandered around the streets looking for an internet café. It was 2005, well before smart phones gave us the ability to walk around with information at our fingertips. And, of course, this was the week my laptop had decided to retire from operating. I finally found a cafe, paid $10 for 30 minutes and fruitlessly searched the internet for any new information I could find about what was happening to my hometown. 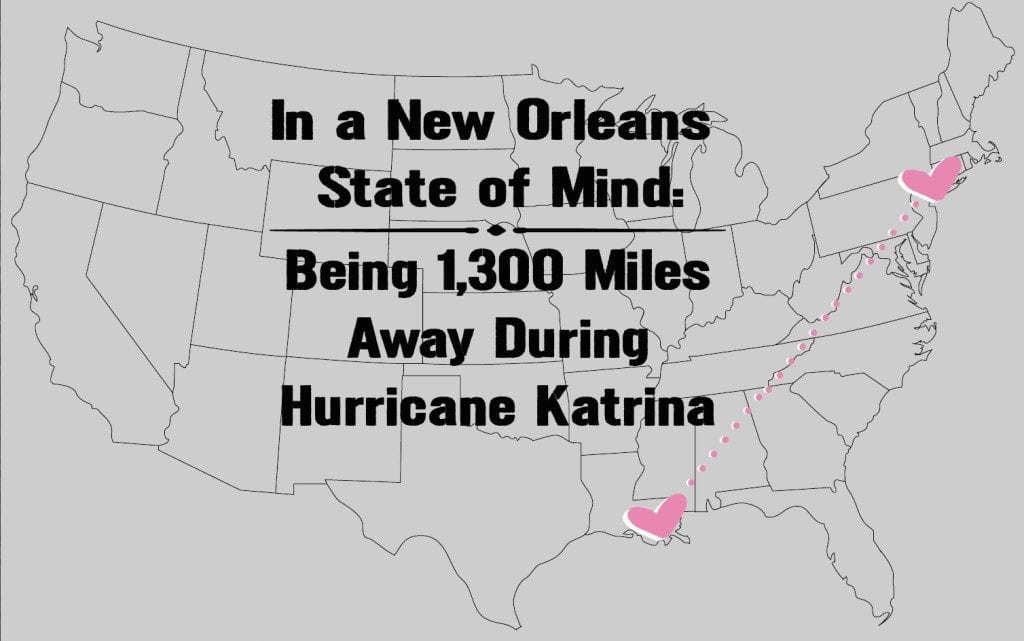 After having needlessly evacuated for Ivy and Georges a few years prior to Katrina, my family was planning on waiting out the storm. They finally decided to leave after the mandatory evacuation was announced. The fear of not having power for a while with a sick relative was the final factor. “Make sure to take the photo albums,” I told my mom. I wasn’t there. I had no concept of the stress that was clouding every moment of her life at that time.

The streets were log-jammed heading west to Houston, so my family decided to travel northeast. By doing so, the storm was literally chasing them. Cell service was spotty, and I was ravenous for updates. Were they doing okay? Had they found a place to stay? I felt so helpless. I tried to do what I could. I booked a hotel room for them (Unfortunately, they were unable to use the hotel as the establishment was more suited for Walter White’s clientele…). My sister (who also lived in NYC at the time) and I sent my family the Community Coffee and Chicory that we had in our freezers. They couldn’t find it in Georgia where they wound up, and we wanted them to have a taste of home. All I wanted was to be with my family during the evacuation. All I wanted to do was comfort my mom. I felt so guilty for being in New York. Now that I am a mother myself, I know that it was a blessing for my mom that my sister and I were not there. I know that having two of her babies safe and far away from what was happening was something that eased her troubled mind.

There was nothing else that I could do for them, except worry. And wait for information. In the end, my family was very fortunate. Their home was okay. But they were forever changed. We all were. Whether you lost everything or nothing. Whether you were there or 1,300 miles away. Unfortunately, some hurt a lot more than others. But if you are from New Orleans, when your city hurts, you hurt.

I lived in New York for over seven years after Hurricane Katrina. And throughout those seven years, almost every time I met someone and told them I was from New Orleans, they asked me if my family made it through Katrina okay. It was heartwarming that after seven years people were still concerned for our city.

Sadly, in the autumn before I moved back home, the Northeast was hit by Hurricane Sandy. Homes were flooded, trees fell onto rooftops, areas of NYC were out of power for days on end. I hated that my second hometown was damaged by another devastating storm. My heart was broken seeing my friends dealing with some of the things my family and friends in New Orleans had dealt with seven years earlier.

One thing about the two storms struck the wrong chord with me, though. During the weeks after Katrina, I remember commentators on television constantly questioning whether the Gulf Coast, and New Orleans in particular, should rebuild. People asked me the same thing. Some even insinuated that it was crazy to rebuild New Orleans. I never heard anyone question whether the East Coast should be rebuilt. I understand that hurricanes hit the Gulf Coast more often and harder than other areas, but New Orleans never considered not rebuilding. That wasn’t even an option.

Living back home, I do not look forward to the near certain evacuations in our future. Nor do I look forward to the days we will surely spend without power (No air-conditioning?! We’ve really got to add a generator to our shopping list.). While I dread those inconveniences, the list of things that I look forward to is a mile long. I couldn’t be more excited or proud to be raising my son in the “new” New Orleans. And if another Katrina hits, we will rebuild. And we will be stronger for it.

The Pros and Cons of Having a Talking Toddler