I always knew that I wanted an epidural before giving birth to my children. Not getting one wasn’t an option as long as circumstances allowed. When I gave birth to my first child two and half years ago, the epidural worked like a dream. Receiving it was quick, easy, and very effective.

For my second child, my water broke three weeks early. By the time I got to the hospital, I was less than a centimeter dilated so I knew there would be plenty of time for an epidural. Unfortunately, this time around the epidural was not quick. It was not easy. And it certainly was not effective. Oh, how I wish I had taken a Lamaze class… 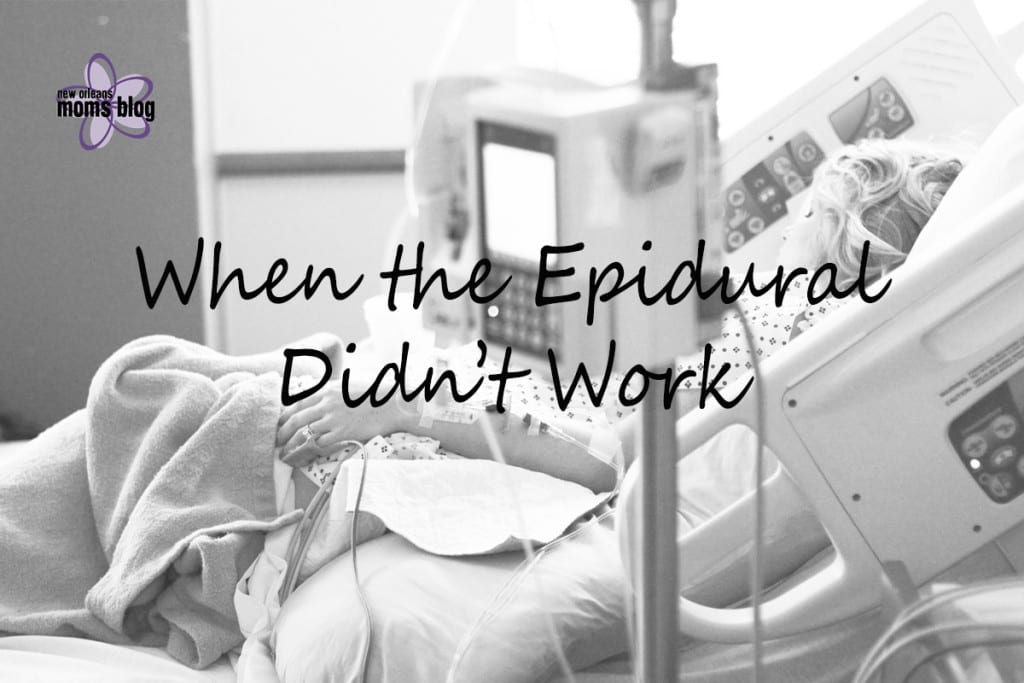 It took nearly 40 minutes and 11 stabs of the needle before the doctor finally administered the anesthetic. It was painful, and I was left a shaky, sobbing mess. Despite the awful experience, I was relieved that it was over with and waited for the medicine to kick in so I wouldn’t feel the contractions anymore. But as time passed, I realized that the contractions were only getting stronger. I didn’t feel numb at all. After 45 minutes had passed, the only part of my body that felt any effect from the anesthetic was above my knee where the skin felt slightly tingly – kind of like when novocaine has mostly worn off from a dental procedure. Above that small spot on my leg felt completely normal, as did the rest of my body. I called the nurse who paged the anesthesiologist to re-administer the epidural, but while we waited for the doctor my contractions started to become unbearable. I was writhing in pain. After 20 minutes, an examination, and an embarrassing display of feral grunting on my part, it became clear that I was too far along for another epidural. I was more scared than I had ever been. Giving birth without pain medication was never part of my plan.

My obstetrician came in and gave me a pep talk – kind of like a football coach would give to a kicker who has a chance to win the Superbowl.

“Listen, Marie, this baby is right there. In five minutes you will have your baby girl. Just a few pushes.”

And she was right. It only took a handful of pushes and about five minutes before my daughter was born … five of the most painful minutes of my life. At three weeks early, she was seven pounds nine ounces. I imagine it would have been more painful had she arrived full term.

Several people who either haven’t given birth yet or have only given birth with successful epidurals have asked me what it felt like when the epidural failed. What did it feel like? Physically, it felt like I was constantly having three very painful Charlie horses across my abdomen. Emotionally, it felt terrifying. But, honestly, the fear of the pain was worse than the actual pain. Don’t get me wrong, the actual pain was REALLY bad, but it never got as bad as I feared that it would. For that I am grateful. And if we decide to have another baby, I will be the first in line at Lamaze class just in case the epidural doesn’t work again.

What was your experience with epidurals? Did you have any complications?

On Becoming a “Girl Mom”