Anyone who has spent more than a couple of months trying to get pregnant can tell you that the Two Week Wait is a miserable time. For those of you unfamiliar with the term, the Two Week Wait is the time in between ovulation and when you can accurately test for pregnancy (or when your period starts). It is also the time when a woman hoping to conceive drives herself a little bit bonkers. 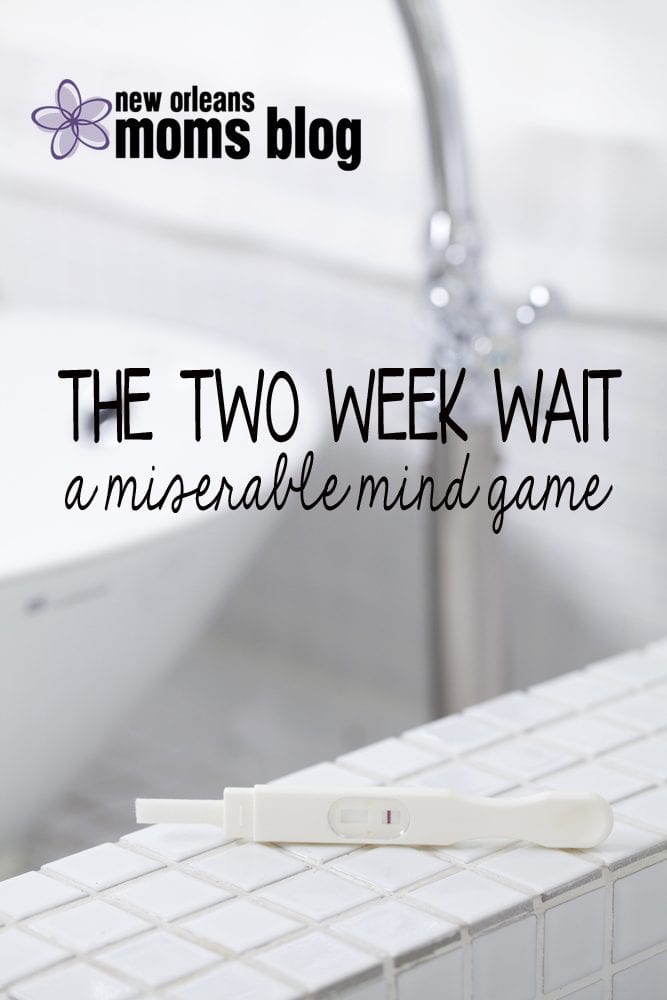 When a woman finally decides that she wants to get pregnant, she is pretty much ready to be pregnant (at least in my case). The first month that my husband and I “pulled the goalie,” I totally assumed that I had conceived, so I was a little confused when my period started. After a couple of months trying without any success, I purchased some ovulation detectors. That’s when I started getting obsessed during the Two Week Wait. Now that I knew exactly when I had ovulated, I was counting down the days until I could take a pregnancy test. It took me about eight months to get pregnant the first time, and for about six of those months, I was mental hostage to the Two Week Wait.

If you fall victim to the Two Week Wait’s mind games, you analyze everything your body is doing.

While sitting on the couch, you smell an orange. Since the fruit is all the way in the kitchen, you assume that your sudden supernatural sense of smell is an early sign of pregnancy. You start thinking of names for your baby. In actuality, your husband dropped a tiny piece of an orange rind under the sofa during his afternoon snack.

Your breasts are suddenly very sensitive, and since they don’t usually get sensitive when you have premenstrual syndrome, you assume you’re pregnant. You start mentally decorating the nursery. In actuality, you have PMS and your breasts are just extra sensitive because it is 40 degrees outside.

You have cramps, but they don’t feel like the slow, achy PMS cramps you usually have. They feel more like the tugging, implantation cramps described in all of those pregnancy boards you follow. You are obviously pregnant. You start shopping for maternity clothing. In actuality, they are PMS cramps and they just feel different because you had leftover chicken tiki masala for breakfast and Chipotle for lunch.

I am now 16 weeks pregnant with my second child. I am not sure how long it took to get pregnant this time because there were a lot of stops and starts due to my health issues. We would try for a month, then stop for six months, then try again for two months, and so on and so forth. After so many stops and starts on the road to this pregnancy, I grew impatient – mainly because I was getting older and I hoped that my children would be close in age. There was one month in particular when I convinced myself that I was pregnant. Every sign my body gave me screamed PREGNANT! Of course, that was just my mind playing tricks on me. When I got a negative pregnancy test, I tested again thinking that I must have just tested too early. When I bled a little, I assumed it was implantation bleeding, which I had experienced during my first pregnancy. When my period started, I cried…for a very long time. I know that may seem silly to some of you since my journey to pregnancy has been relatively easy compared to others’ journeys, but I felt so disappointed and heartsick. I had built the pregnancy up in my mind so much that not getting pregnant felt like I had lost something.

Two Weeks is Just the Beginning

When you are fortunate enough to have your Two Week Wait end with a positive pregnancy test, you celebrate with tears of joy. And then you stop and realize that the miserable mind game you’ve been playing for the past two weeks has just been extended for nine more months. And you smile. Because you wouldn’t want it any other way.