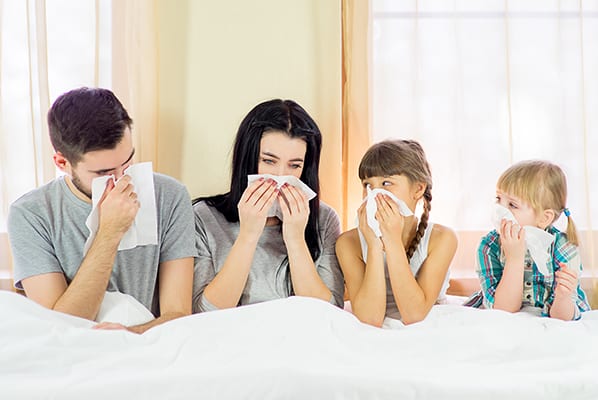 Last month my husband, my daughter (presumed positive), and I were ridden with the dreaded COVID-19 virus. To say that I was terrified is an understatement. We were shocked and upset to find out that we were sick as we had been following all the proper precautions, but with my husband being an essential worker, interacting with various people daily, we remained cautious. We have some suspicion of how we contracted the virus, but are not sure of exactly what happened.

It was a Saturday morning when I woke up extremely exhausted with a very slight scratchy throat. I convinced myself that I was tired because I had just begun going back to work in person that week. As the day went on, I could not shake the tired feeling, and by that evening I had a fever of 100. I continued to feel sick throughout the weekend, self-isolating, and eventually went for testing on Monday afternoon. By Tuesday evening my husband had a fever and runny nose, so he went for testing on Wednesday. On Thursday we were both confirmed POSITIVE. I was not surprised based on my symptoms, but my husband was shocked because he only had a fever of 102 about 12 hours and a slightly runny nose. He was sure he should feel worse if he were positive.

Being in isolation with two children is quite the ordeal. We continuously tried to stay away from the kids and have them wear masks any time we were in the same room. This part was absolutely heartbreaking for me as my toddler wanted to constantly cuddle and run in my room to show me her toys. By day 4 with both parents being sick staying isolated became impossible. We did our best and sanitized all surfaces and furniture in our home continuously combined with constant hand washing and gloves when preparing meals.

Getting food was also a task. Thankfully we had gone grocery shopping before I became ill and my hubby had meal prepped the food on Sunday so we were able to eat healthy meals. Otherwise, we used meal delivery services to order take out and grocery delivery to fill the gaps.

Symptoms for all of us were quite different. I had the most symptoms that came and went and only experienced a fever for 72 hours. I had nearly every listed symptom with the exception of the loss of taste and smell. The odd part was each day the symptoms were different so it was hard to cope with the sickness. One day I would feel very flu-like, other days I had a pounding headache and earache, another day was extreme backache. I also experienced insomnia, which was unexpected but apparently common. My cough also continued until day 20 or so, after re-testing negative.

We decided to treat the kids as presumed positive cases versus getting them swabbed with the advice of their pediatrician. I also did not want to risk getting anyone else sick because we would need to enter the pediatrician office to have them swabbed because we knew trying a swab inside the car would be a disaster and not worth the trauma.

What did we learn?

Minor symptoms do not mean you are not sick! Honestly, if I were not sick, my husbands’ symptoms could have been easily ignored. He had one evening of fever and only checked his temperature because I was experiencing symptoms. This is why it is so important that everyone wears masks and socially distance themselves at all times. My kids never had a fever and had minor symptoms that did not keep them from engaging in their usual daily activities.

There is no time to prepare once you are sick. If you have not utilized grocery or food delivery, now may be the time to get acquainted with a service that delivers to your home. Our preferred grocery delivery service does not deliver to our home so I had our food delivered to my sister and went over to pick it up from her doorstep. Keeping a few freezer meals is also a great idea because no one wants to cook while sick.

Lastly, the biggest thing we learned is that you will continue to test positive up to 14 days after symptoms start. Our jobs required a negative test to return and when I went back to test on day 12. Two days after I was allowed back to work per CDC guidelines, I was still positive. I was not able to get another rapid test until day 16 and did test negative at that point. I am NO doctor and am unsure of how contagious a person may be on day 10-14 but many jobs offer 10 days of pay and require a negative test. You may need to utilize extra vacation/PTO days not included with new COVID pay policies, so save your days just in case!  Many hospitals are also not offering re-tests to return to work; we had to utilize private urgent care to receive re-tests.