“Are you done, now that you’ve got your girl?” Pregnant with my third baby (first girl), this question offended me. It bothered me. It always left me with a sense of lacking. Putting aside the offensive fact that people were assuming my sole purpose for having kids was to “get a girl,” the mere thought of never doing this again was sad. My family just didn’t seem complete yet. I took this as a clear sign.

Since we’ve been together, my husband and I have gone up and down in the number of kids we’ve wanted. When we were young and naïve, the sky was the limit! I wanted five or six; he wanted eight! Yes, you read that right – EIGHT! We were well on our way to creating the empire that would become “Ross and Jen Plus Ten!” But then, reality hit. We both got real-world jobs, we got married, and we had our first baby. And, parenting slapped us in the face. So, that magical, unrealistic number of eight drastically decreased to one.

But, life throws us curveballs, and those original dreams of a big family were still creeping in the shadows buried deep under the stress, anxiety, and to-do lists because fast forward three short years, and it’s the “Ross and Jen Plus Three” show where feeding schedules ruled all, adult time was non-existent, and there’s clutter as far as the eye can see.

With three kids, I grew unbearably tired. With three, I struggled with logistical planning. With three, I downloaded the Starbucks app and became an avid coffee drinker. Life. Was. Hard. The laundry, the dishes, the work – it just piled on. The anxiety was high and almost palpable amongst us all. This transition was truly the hardest one so far. The dark circles, the grey hair, and no me-time was all evidence that I had reached my limit. But, still, I found myself longing every time someone asked that dreaded question, “Are you done?”

The thought of being “done” moved me to tears, but why?! I was hitting my breaking point! I was stretched too thin! My hands, and heart, seemed FULL! But, to never feel fluttering kicks in my belly again was sad. To never bond while breastfeeding again was heartbreaking. The desire was unmistakable; this Mommy wanted more, and so did my husband! It’s like we couldn’t shake that pre-marital, big-eyed naiveté of one big happy family. What’s one more?! 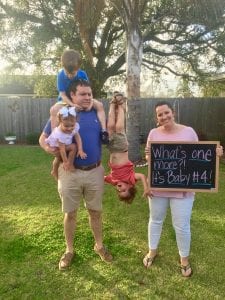 Well, I’m here to tell everyone that it’s a breeze! Ok, well, there is the lack of sleep, more grey hairs, money woes, and logistical headaches, but I am taking it in stride, and it’s been incredible. Here’s why:

There were no surprises.

To have done this four times, I knew what to expect and how to approach any and every little issue. The fear of the unknown was just that – unknown.

We were all set.

We had everything we possibly needed: all the clothes, all the products, all the books, all the experience.

We were veteran parents.

The worry of being outnumbered was a fear of the past. That was a legitimate concern with the third, but we’ve conquered that challenge.

I didn’t care about the little things anymore. I had to kick “cookie-cutter” to the curb, and what a relief that’s been! My priorities changed, immensely. It’s as if I have so much more space in my head to think now.

Life kept going and none of us missed a beat when our fourth baby (second girl) was born. I wasn’t allowed to pause; I had to push through, and I did, with more ease this time. Heck! I was even moving boxes and helping assemble dressers the night I came home from the hospital! My husband and I were veteran parents, and though we sometimes feel like clowns juggling four different sized balls at a circus – with monkeys running amuck – it’s like we’ve put in so much over-time and practice at this point that we know we’re going to perform our best for these  I mean, kiddos! It’s just a normal routine in this “Ross and Jen” show now – our new normal. But, of course, that question still haunts plenty of conversations, “Are y’all done, now that you have two of each?” But, that’s another story for another episode. 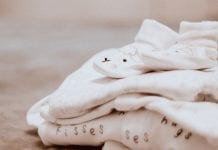 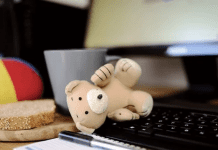 To My Childless Boss: 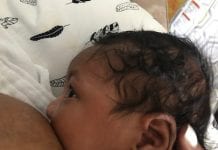 The End of My Breastfeeding Journey: My Weaning Story

Screen Free Summer Reading Tips for Children of ALL Ages