Being born just 19 months after his sister, my son was exposed to all things girl as much as, if not more than, the typical “boy” stuff. As he grew, he played with tea sets and Disney Princesses with the same enthusiasm as his race cars and lightsabers. He wore dress up dresses and lion costumes without thinking one was for boys and one was for girls. Hell, he even used to ask for me to paint his nails when I would do mine or my daughter’s. On the same hand, my daughter was (and still is) well rounded and into “boy” things without me having to force it. I didn’t have to be on alert about all the princess toys/games/clothes the way some girl moms do.

Having boys and girls in the house meant there were no boy toys or girl toys – everything was fair game.

Being the modern parents that we (think) we are, we allowed our son to be who he was and play with what he wanted 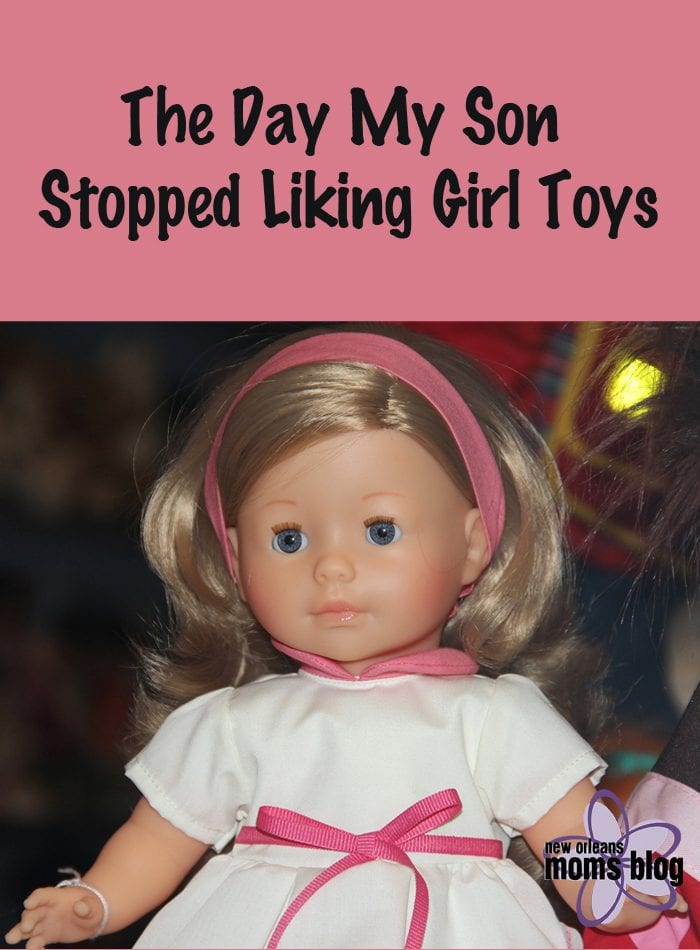 without making a big deal about it. You want to wear makeup like mommy? SURE. You want to fix things like daddy? GO FOR IT. I also didn’t make a big deal when he did these things. There are no blog posts about his love for Snow White, no Instagram photos of his painted toes, and I certainly wasn’t compelled to write a book and deem him my princess boy. This was a non-issue. However, I felt fortunate that my kids were not stuck in some gender stereotype. Since we have a boy and a girl so close in age, they have a nice variety of toys/activities to choose from without much intervention from me, and I like it that way.

This all came crashing down the other day when my son declared he did not like “girl toys.”

We were watching one of those Nickelodeon commercials, and it was very girl oriented. My son likes to tell me he wants “that” when commercials are on – I never quite know what “that” is so I just smile and nod. But that day he exclaimed, “I don’t want that. It’s girly. I don’t like girly things.”

Since it was a non-issue when he wanted to play with girly things, shouldn’t it be a non-issue now?

No. Now it is an issue. Now I have thoughts and questions and concerns.

Who told him that these things, things he used to enjoy, were girly? School? The media?
Is he just figuring out his gender identity?
Why is girl stuff bad?
How will he treat a friend who does play with girly things?
Will a boy that doesn’t play with girl stuff as a child grow up to be a man who doesn’t do laundry, dishes, help with the kids because those things are “girly?”
Why doesn’t my daughter say anything of that nature? She’s older than he yet is still into Star Wars, Ninja Turtles and Power Rangers.
Is there more pressure on boys to be masculine?

I put none of these thoughts on my son. My response to him was simple, “Okay buddy. But you know, if you like something, you can play with it, even if it seems girly.” I am not going to berate my four year old about this. I am not going to try to change him or his mind, but I am not going to perpetuate the idea that boys have to do “boy things” and that “girly things” are somehow less interesting or fun.

Dear Husband, I am Not Mad at You