Generally, I don’t like parenting labels, but I would consider myself a pretty mainstream mom with natural/hippie mom tendencies. I shower and wear deodorant, but I use baking soda to wash my hair and that deodorant – I make it myself. My kids sometimes eat fast food and watch far too much tv, but I try to buy mostly organic produce and we spend a lot of time outside. And I had a drugless, pain free, hypnobirth, then promptly requested my Percocet. 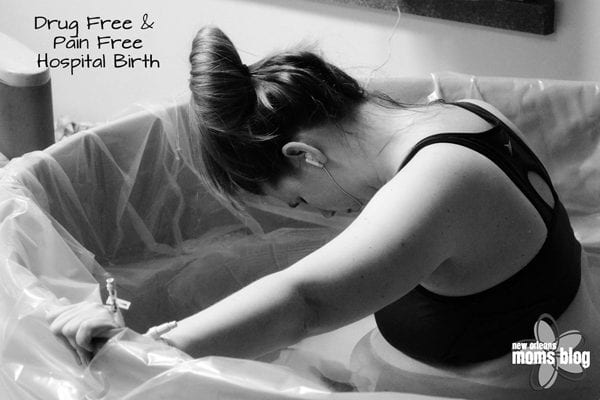 To me, giving birth without an epidural was not about avoiding drugs. It was simply something I wanted to experience, pain and all. I compared my desire to have a med-free birth to those people who like to run marathons or climb mountains. It is hard work; it takes training and endurance, but at the end of the line, at the summit, there is a sense of achievement that is likely unparalleled. That is how I imagined a med-free birth would make me feel. I ended up having three chances to climb this mountain. The first time was a Pitocin augmented labor that ended with me receiving an epidural. No regrets – I needed it! The second time, I did it. I reached the mountain top. It was hard. It was painful. It was beautiful. It was worth it…but it hurt. Often, people claim you forget about the pain once the baby arrives. Um, no. In fact, one of the first things I said once my son was born was, “Damn, that hurt.”

I thought that would be the last time I gave birth, but fate had other plans. This time, I knew I wanted a drug free birth, but I also wanted a pain free birth. Initially, I thought that was a pipe dream, kind of like my dream to be able to drink wine and watch Netflix yet still lose weight. Soon, however, I learned more about something called “Hypnobirthing.” Of course, I rolled my eyes. I knew what birth was like, and no one could tell me that it was painless. They were either lying, or they had a super high pain tolerance. Still though, I wanted to research it. After all, the worst thing that could happen would be that it didn’t work.

Once I received my course from Hypnobabies, I realized I had to fully buy into the method for it to have a chance at success. I told my husband, “I don’t know if this is real, but I have to believe that it is.” And I did. I listened to the CDs and read the workbooks, though admittedly not as much as I would have liked. Did I mention this was my third child in three years? Yeah, time was not on my side. I would often pop the disc in at bedtime and fall asleep well before it completed.

Just a few days before my son’s due date, I started to feel…something. I would say they felt like Braxton-Hicks contractions. I felt the tightening, but no pain. I decided to time them, and since they were regular and about 5 minutes apart, we headed to the hospital around 8pm – that’s right, no home-birthing here. I honestly thought they would send me home, but I was more worried about delivering in the car or on side of the road, so I figured it was worth getting checked. Turns out, I was 5cm and in active labor.

The evening was pretty uneventful. I spent most of the time in our rented birth tub listening to hypnobabies discs. My OBGYN was astonished that I was even in labor, much less 8cm as I could talk (and even laugh) during contractions. I was beside myself thinking, “How can this be?” All the credit goes to hypnobabies. If I were not so aware of my body, I likely would have had the baby at home because I felt pain for a total of 2 minutes and 32 seconds. I know this because it’s on video. I’m not showing it, don’t worry!

For an average mom like me, having a pain free labor seemed unrealistic. I assumed you had to be more, I don’t know, gentle? Ethereal? Motherly? Athletic? Yet here I was, achieving what I set out to do. I would most certainly recommend that anyone interested at least give hypnobirthing a try.

If you do attempt hypnobirthing, I have two pieces of advice:

Believe it. Ignore your doubts and tell yourself this will work. Our minds are very powerful.

Also, pay attention to BOTH sections of the course. You see, there are two phases of hypnobabies: the labor phase and the pushing phase. I paid little to no attention to the pushing phase of the course. I wanted to, but frankly, I didn’t get around to it. When it came time to push, I was woefully unprepared. I basically went from 0-60 in 1.3 seconds. For the two minutes I pushed, I felt like I was being torn in half; I screamed, I cried, I even wondered, “Is it too late for an epidural?”

Thankfully, that unbearable pain was over quickly, and before I knew it, I was holding my sweet baby boy, begging them to give me pain meds.

Maternity Leave While Working For Yourself

Powering Down: Learning to Spend my Days Unplugged