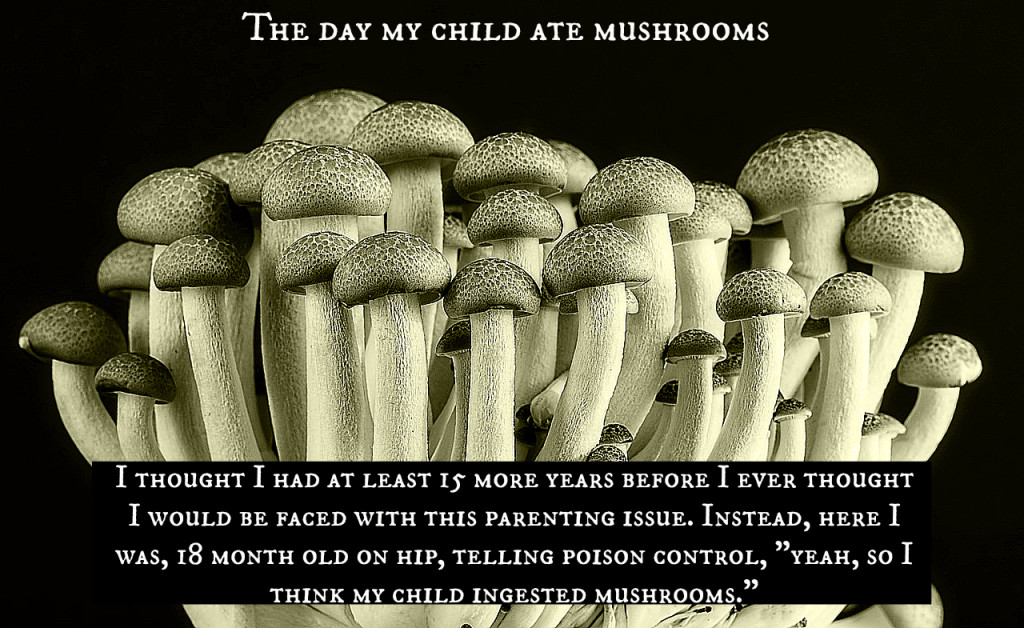 Yes, my child ate mushrooms. I thought I had at least 15 more years before I was faced with this parenting issue. Instead, here I was, 18 month old on hip, telling poison control, “yeah, so I think my child ingested mushrooms.”

Let me backup a bit…

It was a Monday afternoon and my husband, who usually does not get home before 7:00 pm, got off work at 5:00. He took the kids outside to play while I prepared dinner. Ten minutes later, he comes barreling inside saying something about Jack eating mushrooms *he thinks,* and we need to go get his stomach pumped. Let me explain that my husband, a physician, sees the worst of the worst, and when it comes to his children, his mind immediately goes to what he has seen and treated firsthand. I’m glad I don’t have that in the back of my mind because I have enough anxiety as it is.

I suggest calling poison control first. They politely tell us that if he has eaten more than two garden mushrooms, he needs to be given charcoal (read :: have his stomach pumped). We thank them and hang up. I finally get the full story from my husband: he was swinging our older child while Jack sat no more than 10 feet away playing in the grass. When George next looked up, Jack had plucked several tiny mushrooms from the ground, was holding some stems and chewing. Ensue the panic. Since we had no way of knowing whether he ingested zero or ten, to the emergency room we went. We did ask poison control whether we should bring the mushrooms with us to the E.R., and they said unless there was a mycologist on staff, it would be a guessing game, i.e., Google search party. We knew there was no such specialist at the hospital, so we opted to leave the stems at home.

After we were processed at the E.R. and placed in a room, we started getting nervous about the prospect of Jack having to get his stomach pumped.

No mother or father wants to watch their child suffer, and I know my kid; he would freak out! The kids were melting down because it was pretty much bedtime by now, and Jack had yet to eat. Even Disney Junior on the iPad was not cutting it. You can imagine our relief when the E.R. doctor told us that if he could handle drinking the charcoal (mixed with chocolate milk), they would not have to force it down his throat and into his stomach. 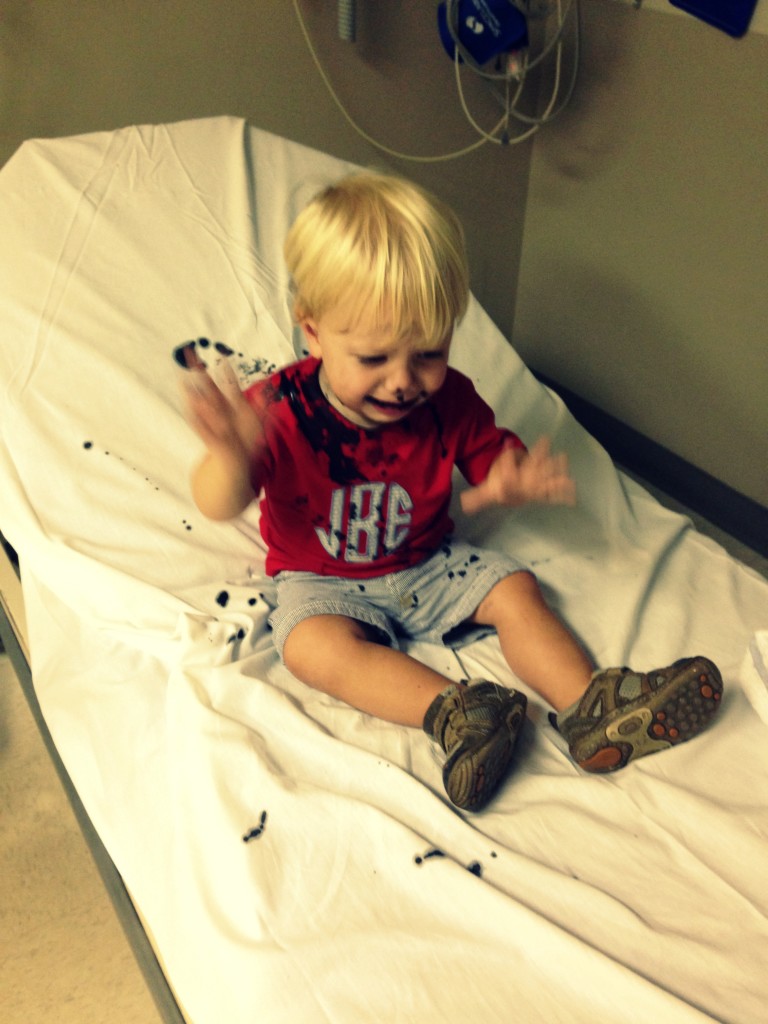 Then I remembered that this was Jack, my stubborn, determined and sometimes difficult child. I thought, no way is he going to drink this stuff especially when I touched it to my tongue and almost gagged. But again, this child continues to surprise me. He slurped down several ounces before refusing. Then I had to play tough mom and try to slip in some unsuspected sips. You can see from the picture how well that went. But it worked because the doctor informed us that he had swallowed enough of the mixture to be discharged. We headed home with instructions that if he did not have any issues throughout the night, he was all clear, and the mushrooms,  if ingested at all, were likely non toxic. I breathed an incredible sigh of relief when we awoke to a happy baby the next morning.

I will admit that I was initially miffed at my husband.

I kept thinking, “if only you had watched him more closely.” I never spoke those words to him, but they were definitely floating around my panicky brain. Well, karma is alive and well in my world and just 8 days later, when Jack was under my watch, he stumbled down a 12 inch step and long-story-short, wound up in a cast for two weeks. Thank God, there were no breaks, but I did receive a big fat lesson in passing judgment. I was relieved that CPS was not called since we had been to the E.R. twice in nine days and equally alarmed that this child will probably ensure that we meet our health insurance deductible on an annual basis.

Have you taken your children to the Emergency Room? If so, what for?

Our Children Are Not Okay {The Unspoken Victims of Covid 19}

New Orleans Be the Change Spotlight :: Introducing Communities in Schools...