By definition, to run a gauntlet is to go through an intimidating experience to reach a goal. And a lottery is a system of chance that is used to get or be given something by choosing names or numbers.

However, in New Orleans, lottery means two other things: 1) the Louisiana Lottery that awards millions of dollars to one or more lucky individuals OR 2) the system used to assign children to schools in Orleans Parish. For all intents and purposes in this article, I’ll be using definition number two.

Running The Gauntlet to Get Your New Orleans Children Into School

Running the gauntlet in New Orleans is jumping through the endless hoops needed to complete the application process that allows your child to apply to public and private schools.

So, let’s be the parent applicant for a hot second. I’ll give you some backup on the terminology. Just read. 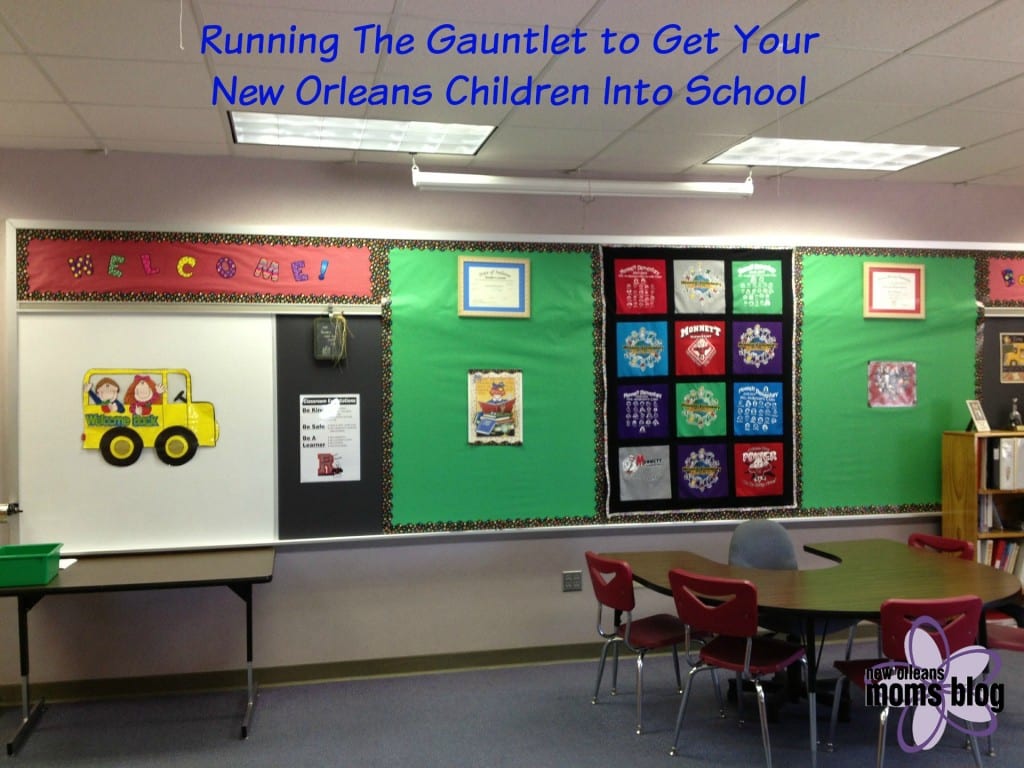 You’ve done it. You’ve run the gauntlet. You have attended countless mandatory open houses at public and private schools. One night, you, your husband, and grandma each attended a different open house to make sure that your child’s applications would be valid. Have I not mentioned that your applications are not accepted unless you go to an open house and that you applied to eight public schools and two private? You’ve submitted your OneApp and supporting documents to EnrollNOLA and your four other applications that needed to be hand delivered to separate schools in the GNOCCS. Oh, and the two private school applications with their $50 and $75 application fees. The waiting begins.

EnrollNOLA doesn’t deliver. That’s what goes wrong. And now, you have to accept a spot that some poor waitlisted child needs because you don’t know if your little Einstein has made the cut in OneApp. And if it’s one of the private schools that you’re accepting, you need to go ahead and lay down that deposit. It’s just money.

Here is What’s Happening With EnrollNOLA

EnrollNOLA provides a one application service. It allows parents to submit ONE application (OneApp) for multiple public schools. This service handles the lottery for all but seven of the public schools in New Orleans if my fact checking is correct (I might be one or two off). The Greater New Orleans Collaborative of Charter Schools (GNOCCS, formerly the Eastbank Collaborative of Charter Schools) are six of these: Audubon Charter (PK-8), Edward Hynes Charter (Gifted PK-8), International School of Louisiana Jefferson Campus (K-8), Lake Forest Elementary Charter (K-5), Lusher Charter (K-5), and Robert Russa Moton Charter (K-6).

GNOCCS schools hold their own lotteries and have already done so. Now, they need to know who is accepting the spots so that they can move on to their waitlists if necessary. Private school applications have been processed and have sent their notices out as well. If you are a private school applicant, you’ve shelled out dollars to apply, and now your acceptance letters need a reply, and your deposits for the 2016-17 school year are due.

EnrollNOLA, you’re the last trial in this gauntlet. The deadlines are up. The GNOCCS and private/catholic schools need to have an answer. And what do we know as gauntlet runners? “The link will be posted once results are available.”

EnrollNOLA’s results were due “the week of April 4th.” This was advertised on its website, enrollnola.org, and the employees at (877)343-4773 (their phone number) were quick throughout last week to assure parents who called in that they were “working on verifying all of the applications and [that] the results will be available Thursday or Friday at the latest.” (I quote this because this is the EXACT response I received each of the seven times I called Monday through Thursday last week). Thursday afternoon as I was refreshing the enrollnola.org page praying that the link for results would become available, the message went from “The link will be posted later today” to “The link will be posted soon.” And then, it was Friday. I called again and after two phone calls was connected to the supervisor who informed me that they were still verifying the results (doesn’t the computer do this?) and that we might not have the results until next week sometime. WHAT?! Don’t panic. You’ll get an update about what could happen on Monday, April 10. Maybe.

The Endless Waiting Game Has Implications For New Orleans Families

I won’t rehash the whole acceptance/deposit thing again. You got the picture. Let us, instead, address the fact that New Orleanians are running this gauntlet and freaking out about the hoops that they’ve had to jump through with, now, no clear end in sight. Our charter school system offers amazing opportunities to families. However, the application process has been bungled this year like it’s still being handled by defunct public school agencies that will remain un-named – but whom, I might add, never were late on delivering student placement results.

Then, there are families who are being waitlisted because someone else who wants a spot at a OneApp school are accepting it until the results come out. These families are being penalized because EnrollNOLA failed to deliver on their deadline.

Yes, EnrollNOLA added early childhood education to its numbers this year. Yes, this resulted in having to place 4200 extra applicants in 2600 spots. This is in addition to the 12,000 students from last year. That is a LOT of kids. But, EnrollNOLA, you KNEW that this was happening. You put this system in place, and individuals and schools in New Orleans implemented their deadlines with your deadline in mind. You have upset the balance. I am sure you are working around the clock to fix this mess, but should there have been a mess to begin with?

I’ll end with this: new residents of New Orleans and new parent applicants, please do not let this experience sour you to the charter schools of NOLA. Our charter schools are amazing, and this bungle at the end of the gauntlet does not reflect on the teachers and administrators at our amazing schools. They are just as upset as we are about this fiasco. Reach out to them with your support and understanding. EnrollNOLA has let them down just as they’ve let you down.

Jill majored in English at Ole Miss and received her M.Ed. in English at Delta State University. This Mississippi girl has been married to her husband, Bert, for ten years (nine of which have been spent here in the Big Easy). After working in market research and the N.O. public school system, Jill became a stay at home mom. Today, when not carpooling their three children back and forth from school to activities and church, the self-described Starbucks addict enjoys reading, running, and cooking. She is a member of the Junior League of New Orleans, is a room parent at Lycée Français where her children attend school, and serves on her church’s Children’s Ministries Committee.

Our Desire to Adopt {Opening Our Hearts to Something Much Greater}