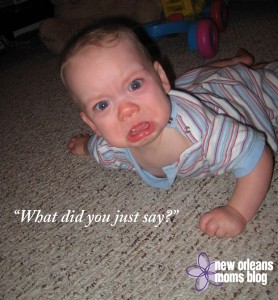 Babies grow up so fast, don’t they? The first year flew by so fast. I blinked, and they were in preschool. And then kindergarten, and now first grade. And somewhere along the line, we forgot to stop cursing.

I have a potty mouth. I will admit it. So does my husband. I learned at the feet of a master (hi Mom!), and I consider myself quite proficient. (We’ve already established that I’m not exactly a traditional Southern woman, right?)

It was okay while the boys were infants. They weren’t listening, right? As they got older, maybe they were listening, but as long as we didn’t make a big deal about it, how would they know that the s-word had any more power than any other word? So we carried on, though maybe at a slightly lower volume. Now, I tend to mumble my way through my curses so that I can still express myself, but hopefully not clearly enough for the kids to hear.

I think we got lucky. Even when the boys got to the “repeat inappropriate things,” they never said anything truly terrible. Okay, maybe there was a short phase of “freaking d***it” but honestly, I’ve never said that, so I have no idea where they got that from. Was I a tiny bit proud of their verbal creativity? I might have been.

We’ve always tried to teach the boys that words have power. As they’ve gotten older and spent more time with their peers in school, they have learned that there are some words you just don’t say. And I’m not just talking about curse words. We don’t comment on someone’s physical appearance. We don’t say words like “hate” or “stupid” when we’re referring to people. We try to teach them to express their emotions and solve problems verbally, not physically. I read books on communicating with children, but I may have skipped over the chapters on profanity.

There will always be more lessons to learn. The other evening, Oliver said he’d heard from a girl at school that “pointing with the finger next to your first finger is like saying a bad word.” I agreed, but reassured them that accidentally and innocently raising that finger wasn’t going to get them in trouble. Accidentally-on-purpose, though, would.

The way I see it, I grew up around swear words, and I turned out fine. I mean, my vocabulary may be more colorful than some, but I didn’t end up being a psychopathic criminal or anything. Just a normal mom who, I promise, doesn’t curse in front of other people’s kids.

Do you curse in front of your kids?

Happy Birthday to Me!

My Kids Were Guinea Pigs {Our Experience with the COVID Vaccine...