Until my son entered kindergarten, I hadn’t heard a lot about a growth mindset versus a fixed mindset. Once they started really talking about this in his class, he gained interest in the topic. And I quickly realized the push back we’d been receiving from him was exactly what we wanted to work against – a fixed mindset. People with a fixed mindset believe you either are or aren’t good at something, based on your inherent nature. People with a growth mindset believe anyone can be good at anything, because your abilities are completely due to your actions.

According to Carol Dweck, the author of Mindset, these mindsets can be shaped in children as young as 4. Children with a fixed mindset want to make sure they succeed so they appear smart. Children with a growth mindset however, see success as stretching themselves, becoming smarter.

My son seems to be a lot like me. He’s an independent thinker, a leader and socially adept. He’s also a bit stubborn and set in his ways <oopsies>. It was proving to be a challenge to motivate him to do things he didn’t want to do, like try new a new food or riding a bike. However, with the introduction of a growth mindset at school and the approach of his sixth birthday, he began to open up. We slowly started working on it, so as not to alter too much at once and get more push back.

We sat him down to discuss things he would like to try or learn. While we did make suggestions, he was engaged in the idea. He was excited for the chance to decide his goals and which ones he would focus on first. We created a list and posted it on his bathroom mirror to look at each day. 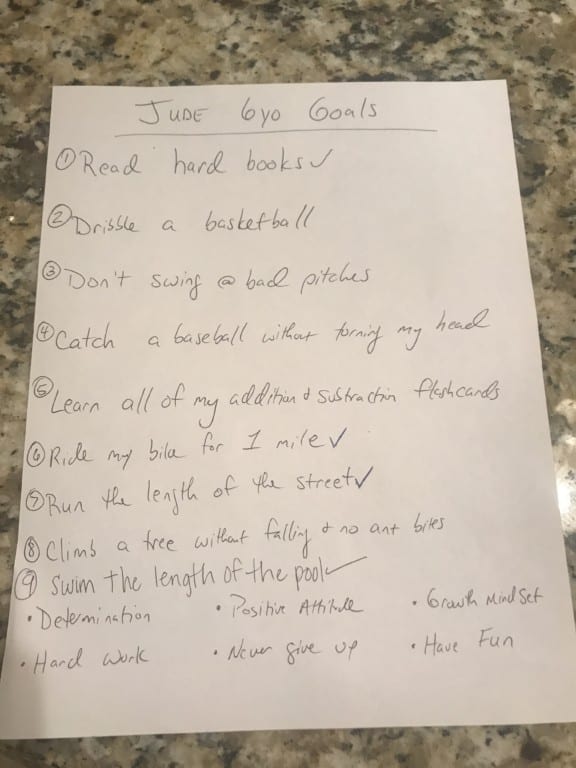 The first goal we set out to reach was riding a bike. The first day was a challenge as he was really scared. “I’m going to fall, I will hurt myself…” etc. We started by taking the pedals off his bike, creating a ‘balance bike’ as suggested by a friend. We would only focus on it for a hour or two at a time, but within a day he was coasting. Two days later, we put the pedals back on and he mastered riding a bike by day 3. He was SO proud of himself and was really excited. He happily checked the item off his list, and we offered to take him to grocery for a small treat. One box of Moana cereal later (which I am happy to report he shared with his brother), he was eager to tackle another goal.

I won’t say it’s always easy since we started this or that we are no longer met with challenges. He still doesn’t like to stop a game to do homework, but when he masters a new reading word, he’s engaged and reading more. Tasks that seem daunting initially will intimidate him and we often hear a firm ‘no.’ We don’t force him anymore but rather remind him of times when he was hesitant or fearful and that it always turned out well in the end. A one-on-one discussion and review of his goals are usually enough to open his mind.

I learned from Mindset that a key thought process individuals with a growth mindset possess is the ability to see a failure as an opportunity. Rather than thinking they aren’t smart enough or strong enough, they view it as a learning opportunity and a welcomed challenge. I loved this thought because I felt it would also shape his thinking to one of positivity regarding himself. No one wants their children to continually feel discouraged or inadequate! So rather than allow him to get upset, say it’s ok and move on, we turned it into a discussion about what we learned. What can you do different? What did you do well? Let’s try that.

The goal list has been fun for my son but also tough at times. When I knew he wasn’t giving something his best effort, it was challenging to not always say so. We found that pointing out the positive effort, reminding him of previous success and being his cheerleader went a long way. And when there’s a triumph, we really show excitement. We jump up and down; encourage him to tell his friends and family. It seems to further his self-esteem and drive to achieve more.

While all this is a work in progress, it’s truly made a world of a difference in his disposition. We had gone through a period where he was just difficult to parent and realized that we needed to change our approach. He’s even added more goals to his list since his birthday only a month ago. I hope through this effort, he’ll grow to be a confident, happy and driven individual. But a happy one most of all.

5 Reasons Your 30’s Are Awesome