One of the first things I was told when I announced I was pregnant with my first child was, “sleep now while you can!” It seems like veteran mothers want to scare first time moms of how much lack of sleep they will have. It’s like they want to bully you into feeling one ounce of misery they feel. Like they say, misery loves company. Now, as a mother of two, I can say that sleep training is for sure one of the most exhausting experiences a new parent deals with.

From the Bassinet to the Crib 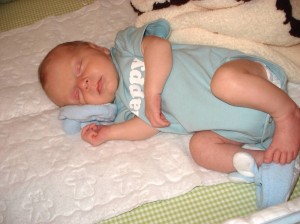 Once I welcomed my first son into the world, I had high hopes of putting him in his crib from day one. However, I couldn’t accept the fact of having him sleep in another room as me at first. He slept in the same bassinet I used as a newborn and slept tight right next our bed. Soon, weeks turned into months, and Noah was too big to fit into that little bassinet, so we moved him to the crib. That’s when I started to realize the reality of all those sleepless nights.

It felt like an eternity until Noah started sleeping in his own crib through the night. However, the reality was that it was maybe a few weeks. For the most part, Noah was a great sleeper. Right before he turned three, we made the transition to the toddler bed, and it was flawless and super easy. Now at five years old, Noah goes to bed on his own without fussing and rarely wakes up during the night. It’s pretty awesome. I thought my second son, Liam, would take after his older brother, but sadly that’s not the case.

Sleeping with my Micropreemie 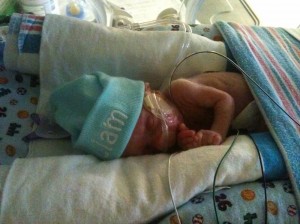 Liam entered the world as a tiny micropreemie and spent  the first 101 days of his life sleeping in an isolette and then in an open air crib. When he came home I was petrified of EVERYTHING! I constantly checked his breathing, measured his medicines out perfectly and was a freak about keeping any germs away from him. The thought of him being in the other room than me would send me into a full on panic attack. So instead of going straight to his crib, I decided to let him sleep in the rock and play next to our bed.

Well weeks went on and on and on, until one morning Liam decided he could sit straight up in the rock and play and rock it while making me jump out of bed in fear he would flip out of it and hurt himself. I decided that it was time to retire the rock and play and try the crib. Oh, and did I mention this was NINE months after he came home? Yeah, I really wasn’t excited for the thought of him being more than an inch away from me at any time. 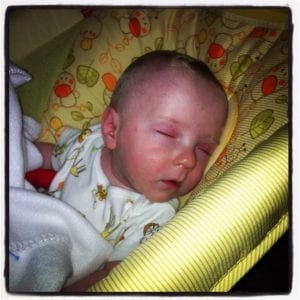 I guess the feeling was mutual, and Liam wasn’t ready as well. He just turned one, and every time we put him in his crib, he would scream hysterically and nothing soothed him. He would even scream as much to make himself throw up all over his crib, which then turned into both of us crying. It was awful. Why was this so hard? Sure, it wasn’t the easiest thing to transition Noah to his crib but it was nothing like this.

So, then we started letting Liam co sleep with us. That turned into months of endless sleep for my husband and I. I had visions of us all cuddling and getting the best sleep ever, but the reality was that Liam slept perfectly while my husband I turned into grouchy exhausted looking zombies. We knew we had to try the crib again, but I was so nervous that we put it off until this past summer. We decided to just take the plunge and try again. 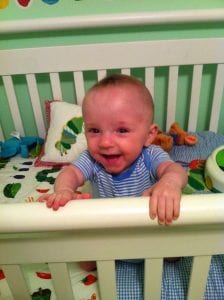 One of Liam’s therapist suggested trying again when he was 18 months, so we did just that. It wasn’t easy, and we had many nights of going in and out of his room, and we both shed many tears. He has finally taken to his crib, and most of the time, bedtime is easy.

However, did I mention that I basically let him stay up until he wants to go to bed? You can’t win it all, and if it means he is toddling around at 10PM while I’m catching up on DVR, then so be it. A plus to a very late bedtime for him is that most mornings he sleeps till 10AM. That makes this mom happy!

It’s crazy how different my boys are when it comes to sleep. Noah loves his routine and always has. He is the early riser of our family. Liam is more of my night owl and will sleep all morning if I would let him.

How are your children’s sleeping habits? Similar? Different? Spill it! 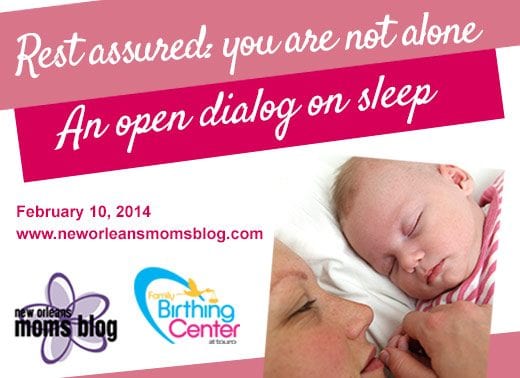