I don’t remember exactly what age I began feeling self conscious of my body, but I know it was early on. Back in the 90s, you could find me hiding behind my swimsuit as a child in an oversized t-shirt. While my friends were wearing fun cut out one pieces (remember those?) or sporting some adorable two piece bathing suits, I was trying to deflect any attention of my body. I was one of those “early bloomers” who sadly was wearing a real bra much earlier than any young girl should. My body was going through the hormonal changes, but in my mind I was still such a little girl. It was certainly a tough time of trying to balance being a child in a teen’s body.

My family recently took a short vacation on the coast and spent lots of time at the pool. My boys were havi 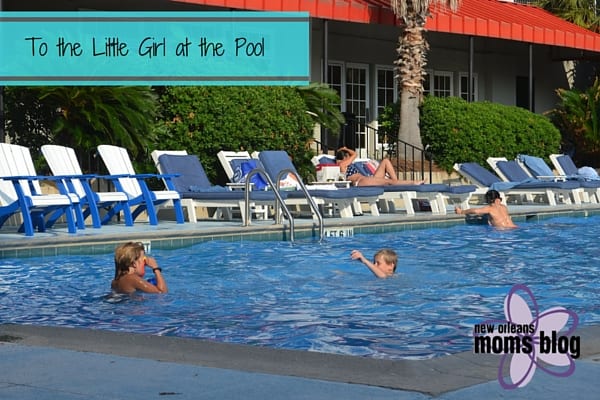 ng a blast in the pool, and there were lots of kiddos playing and having a great time. There was a group of young girls giggling and having a fun time until a group of boys of similar age came over to them. I couldn’t hear what happened, but I could tell by their demeanor they were upset. The giggles disappeared, and one of the girls rushed over to her mom.

I was sitting near one of the girls’ mothers. One of the precious young girls came by in tears telling her mom that some boys told her that she and her friends were too fat to be wearing their bathing suits. My heart sunk. It was so hard to overhear. The mom comforted her and told her to just ignore the boys and that she looked adorable in her two piece suit.

I wanted to tell the little girl that she was gorgeous, smart and nice. I felt a strong need to build her up while these young boys were pulling her down just based off her weight. Who doesn’t feel vulnerable in a bathing suit exposing that much skin? I felt like I witnessed her losing part of her innocence.

I still feel uncomfortable in a bathing suit at a public pool or beach in front of strangers, and I don’t know when I will ever feel at ease taking off my cover up to swim with my kids. But I hope that this young girl never loses sight that she is beautiful and strong no matter what size! As a mother of two young boys, I haven’t had the need to talk about body image yet. However, I do explain to them that everyone comes in different colors, shapes and sizes and that there isn’t one way that everyone should look.

So to the young girl at the pool, I see you. I don’t see you for what size you are. I see your beautiful smile and the happiness you exude from playing with your friends and those funny giggles. Keep on rockin’ that two piece bathing suit despite what those boys say. You look great!

Getting Dolled Up For a Date … with My OB/GYN