I used to have this vision for my child’s birthday parties. They would all take place at home, and the super creative theme would be apparent from the moment guests arrived at the front door until they finished their last bite of homemade, theme-appropriate cake. 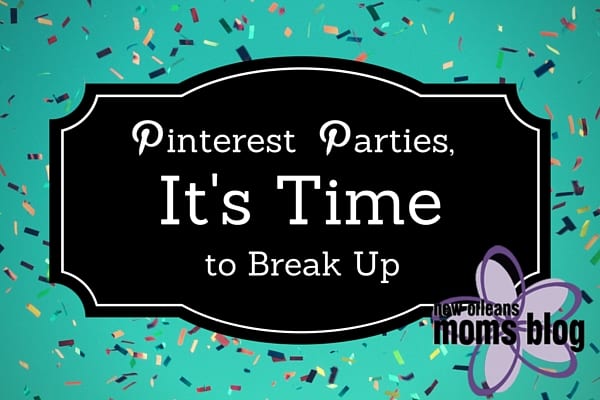 My son’s first birthday party was sailboat-themed. I spent months planning it and made pretty much everything by hand, down to his smash cake. My son’s second birthday was monster-themed and slightly less handmade. Even though it only took two years, I learned a lot about myself and my relationship with Pinterest parties – mainly that we are no good for each other.

Pinterest parties, I think we need to have a talk.

Even with Pinterest, coming up with a theme-appropriate menu is nearly impossible. Can you name a few sailboat-themed appetizers? Monster-themed finger foods? I can’t.

I am an excellent cook, but a horrible baker. Decorating cookies will not end well, nor will any endeavor save simple icing on a cake. That super easy three minute video I viewed did not magically transform me into a professional cake decorator.

Cutting out printable banners, cupcake toppers, signs, and other miscellaneous items has to be some level of torture, not to mention the fact that most guests did not notice those painstakingly perfect circle cuts.

Staying up until 3am the night/morning before the birthday party left me with under-eye circles no concealer or homemade remedy can hide.

DIY does not mean cheap. Not even close. So, when I tell my husband the budget will be under X dollars, I might as well triple it for supplies and trial-and-error.

I Think We Should Start Seeing Other People.

When I started searching for dinosaur party supplies six months out, my husband gently suggested that we have our son’s birthday party *gasp* somewhere else! I begrudgingly agreed to scope out a few local venues, but secretly planned how I could fully implement the dinosaur theme. When we found a place – a super awesome trampoline park – I felt relieved at the idea of only having to decorate a party room instead of a party house. I am pretty sure my husband felt even more relieved that I wouldn’t have him running around doing last minute house prep before the party.

As the party’s date neared, I found myself less and less motivated. I guess my heart just wasn’t in it anymore. A couple weeks beforehand, I drove to the party store, ordered a dinosaur balloon bouquet and bought some dinosaur plates, napkins, and cupcake toppers. All the food was store bought and did not remotely resemble a dinosaur (but they were all my son’s favorite foods). The day of the party, I spent less than five minutes setting things up because I had party helpers, and the party itself lasted two hours. Afterwards, we drove home and left the mess behind us.

I expected to feel guilty for such a less-than-homemade party, but I actually felt … invigorated! Was it the full night’s sleep? Lack of running around like a crazy person with scissors and pastry bags? Lowered self-expectations?

My son had a blast at his party! He ran around with all his friends, jumped to his heart’s content, and ate his party food (let’s not talk about the Jell-o incident from his first party…). In my eyes, the party was a success.

We Can Still Be Friends.

Even though we no longer plan birthday parties together, Pinterest, we can still be friends. In fact, I just pinned a few new dinner recipes this week! Remember those garden plans I had? I will still turn to you for help. I think we can move past the birthday party failures and move toward bigger and better things, like the small home projects I have waiting for my husband to complete.

To My Son’s Teachers :: Thanks For All The Things You...

Show Me Your Wordle :: Why You Should Hop on the...