My mom had lots of systems. I remember chore charts, meal calendars and allowances counted out to the cent. (When you have four kids, it probably was smart not to round up to the nearest dollar, but man, counting out $2.25 and $1.75, etc. every week must have gotten old!) But of all the systems she had, her TV systems were legendary.

There was the era of “TV cards” where we each received an envelope with cards worth 30 minutes. When we watched TV, we were expected to drop a card in the basket on top of the TV. My brother likes to joke that 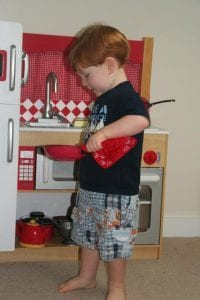 the only effect of TV cards was that it taught him how to lie. Because my parents were well aware of that, this system soon changed to daily allotments of TV time. I remember the rule being 30 minutes on weekdays and 2 hours on weekends.

Well, not for the first time, I am belatedly seeing the wisdom of my parents. How smart they were to set limits on TV! I’m sure all four of us benefited as a result. I ended up becoming an avid reader. Would this have happened if I’d been allowed to sit in front of the TV as much as I’d wanted?

As a new parent, I remember hearing that TV was not recommended (by the American Academy of Pediatrics) for children under two. I thought that seemed like sound logic, and my husband and I decided this would be our initial guideline. I know many parents allow TV before age two, but I will say, from our experience, when you never turn it on, you don’t miss it.

My oldest child, Jack, attends the Waldorf School of New Orleans. The school encourages families to limit TV. Their rationale is that electronic media hinders imagination. This makes sense to me in two ways. First, if you are watching a lot of TV, you obviously aren’t being called to fill that time with your own imagination. But, there is a second, less obvious, connection. TV and movies can be stifling to some degree. For a young child, they start defining a lot of the world, saying “this” is a princess, “this” is love, etc. How much more thrilling for a child to create their own internal images of life rather than having everything painted for them in black and white (or color for that matter)?

While it might not seem like much harm for a child to think that a princess wears a blue dress, lives in an enormous castle and has mice for friends, the greater principle of allowing a child’s imagination room 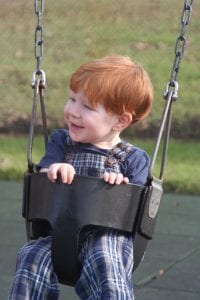 and time to grow is very appealing to me. But I learned quickly that once TV is introduced, both the child and the parent learn its appeal.

About the time Jack turned two, we started reading books and then showing him the corresponding movies. And yes, we watched Cinderella. He would be enthralled, for about 30 minutes, and then his attention would wane. We don’t have cable, but we do have Netflix. Last summer, alongside the birth of baby sister Cora, Curious George started airing more frequently at our house! The novelty of TV was very high for Jack, and he would sit enthralled for increasingly longer blocks. 30 minutes…45 minutes…even an hour! For this momma, the quietness, the calm, the ability to accomplish things, it was heady!

Jack: “I think it will be a special occasion when I get up from my nap.”

Jack: “How bout a special occasion when I finish my dinner, momma?” 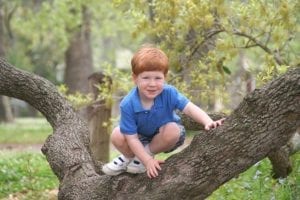 He gradually got the concept. I tend to be the one to dole out the “special occasions.” (These are usually on no-nap afternoons when I’m feeling overwhelmed by the amount that needs to be accomplished.) We’ve been doing this since the fall, and we’ve stuck to it. If he’s already watched TV twice that week (or if it’s Monday and I’m feeling the need to hold on to those “cards”), we pull out books, LEGOs, stickers, trucks, go outside, etc. It forces creativity on my part, and it also forces him to learn to play independently sometimes, especially since this momma still has plenty she needs to get done!

So thank you Mom and Dad for one of many parenting tactics I’m sure I will copy from you!

What is your TV philosophy? What are the rules in your house?

Did Your Pregnancies Get Harder? WHAT’S the WHY?

The Jesse Tree Project :: An Idea to Put Meaning Back...