There’s so much emphasis put on the perfect birth or dictating your birth experience that it’s taken me three-hundred-sixty-something days to write this. I hadn’t wanted to write my second birth story because I really didn’t want to relive it. I’ve had to become immune to the constant discussion of what should have happened or why I should have fought for what I wanted. What I took from everything that happened was, simply, that we survived. What I’ve learned in the last 52 weeks is that we thrived, maybe in spite of ourselves. As I write this, all of the fear and uncertainty and gratitude of that week stream down my face. There’s a lot of baggage that comes with a near-death experience. I didn’t get a chance to process it then because I was trying to hold it together for everyone I love. A year later, I don’t care that my experience sucked. I don’t care that neither of my births were what I wanted or what people told me I should fight for. I fought for three healthy babies and my own health. I won. That’s what matters. That’s enough. That’s something to celebrate. 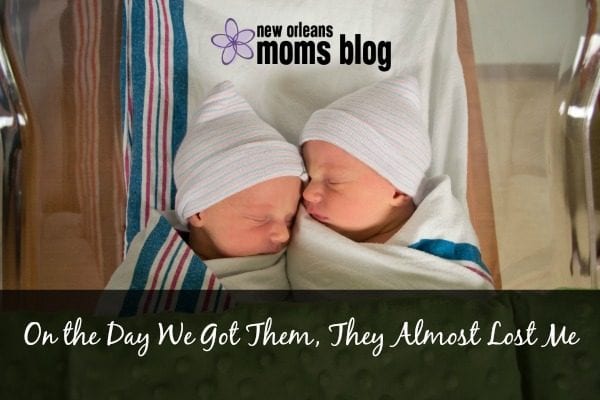 I went to the hospital at 2AM before my 10AM scheduled C-section (both girls were breech). I had been having serious shoulder/neck/side pain for days and was starting to swell. My appointment the day before showed normal blood pressure, so my doctor wasn’t concerned, but my intuition kicked in and I felt I needed to go.

When I arrived, they hooked me up to the machines, asked questions, and started the exam. “You aren’t contracting?” they asked. Not that I could tell, but the pain in my upper right quadrant had been so bad that I might not have noticed. “Well, you’re dilated to 4 and you’re contracting on the monitor. Since you’re GBS positive, we’ll see if we can move you up. Try to get some rest.”

They squeezed me into the 8AM slot. I was so happy to be facing the ability to breathe and move again without pain that I wasn’t scared about the surgery anymore. It wasn’t great, it wasn’t awful. The doctors jammed to “The Power of Love” by Celine Dion and laughed when my blood squirted the other surgeon in the eye and on the ceiling. Sorry about that, Dr. G. I heard them ask for extra injectable Pitocin as I got a quick glimpse of the girls who were whisked to the side with my husband. He showed me photos as they sewed me up. They were perfect and passed all of their tests. They didn’t need the NICU at all.

The nurses wheeled me into recovery and he went off to show the family. As I waited alone and tried to rest, I felt woozy and tired, but figured it was just a result of the surgery. The neonatal nurse came in to bring me the girls to nurse. She took one look at me and hit the call button. She poked her head out of the door and yelled for help. She calmly told me I looked sick, and asked if she could give the girls formula by spoon while I got checked out. I hesitated, but I could tell by the look in her eyes that I wasn’t OK. I granted permission by spoon only. A nurse ran in, lifted the sheet, said the word hemorrhage, and then I passed out. I woke up to people everywhere, asking if I would accept a blood transfusion. Of course, I said. None of my family was there. I was alone and knew that I was possibly near death. Someone put all of their weight on my stomach and I felt and heard the rush of fluid. Again and again. More IVs, more people.

It’s a blur after that.

I was able to stay calm since I had read about being at a higher risk for hemorrhage with multiples because the uterus has a harder time contracting after the extra stretching. No one told me what was going on or where my family was. If it hadn’t been for the books, I wouldn’t have known. A local med student had lost her life from the same thing just weeks prior. I still think about her and her family, every day. 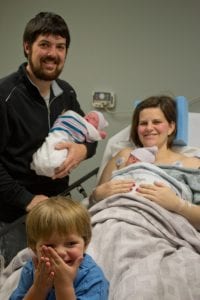 I stabilized to the point where my husband was allowed to come in. He was in tears. He told me he had tried to come in, but they pushed him out and didn’t tell him anything. He and my parents were hysterical in the hallway. “I thought I lost you,” he said. “They wouldn’t tell me what was happening.” I knew then that I had to pull it together and I couldn’t think about what had happened. I just wanted my girls and my family.

We spent the day in the recovery room so they could watch me. There was a malfunction in the transfusion machine at 1.5 pints, and I stopped counting at fluid bag six. I didn’t care. They let me nurse and kangaroo the girls. They let family and friends come in. My color changed from snow to pale. I finally got a room at 7PM.

The resident on call told me to send the babies to the nursery and rest after all I’d been through. Friends left and family dwindled. We asked the nurse on call to take the girls and she scoffed, “There’s no night nursery. Everyone rooms in.”

I had another transfusion on day 3, and what the on call doctors suspected was a uterine infection. The pain from the bruising that occurred as they were jumping on my stomach to clear me out was excruciating. I got more fluids, more tubes. I ended up with the machines that had personality – the poor nurses had to come reset the alarm systems constantly.

On day 4, I was set to go home but the nurse on call told me I needed to stay. I’m not sure why she insisted at that point, but I’m glad she did. Several hours later, a doctor came in and told me I had pre-eclampsia and needed to stay. My pressure was within normal limits, but I hover near undead on a good day, so my “normal” pressure was sky high for me. This explained the tunnel vision, the intense pain in my upper right quadrant, and the swelling. They let the girls stay with me, since they were successfully breastfeeding, though they were officially discharged to my husband. They put me on magnesium and limited activity, and I narrowly escaped another catheter because they felt sorry for me. I named my IV pump Katrina, you know, because she was a bit*h.

That magnesium is no joke. I can only describe it one way – the Dementor scenes in the Harry Potter movies. I felt the life being sucked out of me until I was in a fog. I felt like I had no soul. The world was fuzzy and yet I was there in it, doing whatever I was asked to make sure I got well for my family. We finally went home on day 5. The relief and joy in the “going home” picture is palpable. 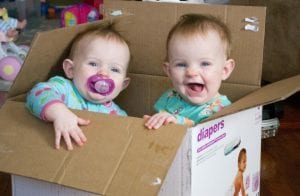 We’ve made it a year as a family of five. I can hardly believe that my six and five pound, thirteen ounce girls are near 20 lbs and days from taking their first steps. My baby boy has grown into an amazing big brother, and my husband’s eyes light up when he plays with all three of them. We never would have made it without the support from our village of family, friends, coworkers, and even a few strangers.

Happy Birthday, Sunshine and Moonshine. You’ve brought light and love we didn’t know we needed. You, your brother, and your daddy are worth every bit of fight I have. Always have been, always will be.

I’m Just Not That Kind of Twin Mom