Four days. I was only able to celebrate four short days. The morning I found out was the most exciting moment of my life. After praying and planning, I was pregnant. For as long as I could remember, I dreamed of being a mother, and that dream would finally become a reality. I told everyone right away. I bought a ridiculously expensive diaper bag. I started thinking of names. I bought my husband a Father’s Day card. I felt nauseous. I wrote my baby a letter. I had a spring in my step. Then, I started bleeding. I went to the hospital to confirm what I already knew: it was over before it even began. I wasn’t pregnant anymore. They called it a “chemical pregnancy.” What does that even mean? Chemically I was pregnant but I wasn’t actually pregnant? Those two pink lines told me I was, dammit. There was a baby in my belly. I don’t care how small, or if it ever had a chance. It was there, it was real, it was mine, and I still miss him or her. 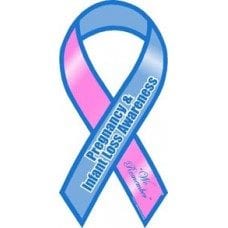 Having to un-tell everyone is the worst. Every time I had to tell someone what happened the wound deepened. Though I had support, I felt incredibly alone. People don’t know what to say, so often, they say nothing at all. Or worse yet, they say the wrong thing. “It just wasn’t meant to be.” or “You’re lucky it happened so early.” Even if there is truth in those statements, a person grieving their loss does not want to hear that. I know people mean well, so I didn’t throat punch anyone over those statements, but I certainly did not appreciate them at the time. I had one person, someone I didn’t even know well, come over and make me brownies and just sit with me. She was amazing. She could relate because sadly she had experienced an early loss just a couple months before.

The month I would have been due with that baby, I found out I was pregnant again. I was too afraid to be excited this time. I was jaded. I had a great pregnancy and nine months later gave birth to a beautiful baby girl whom I love more than life. I then went on to have two successful pregnancies, one a huge surprise. The miscarriage changed me though. I was never again able to embrace pregnancy with an innocent optimism. My pregnancies were rife with fear. Over five years have passed since that horrid Sunday, yet I am not entirely over it. I am not certain I ever will be. Sure, I’m fine. I’m incredibly grateful for the children I have, but I sometimes wonder about the children I don’t have.

A pregnancy loss is a loss, no matter how early it happens.