I should be writing about our camping trip. I cannot write about that, though, because instead of heading out for a fun weekend of camping, we were spending the night in the emergency room, and the only reason we were there is because of my mommy gut.

“See these little spots?” the Dr. asked as he pointed to the X-ray. “We aren’t exactly sure what they are, but they do not belong in her abdomen.” He assured me that we would get to the bottom of this, as we were on day three of my daughter’s mysterious abdominal pains.

Two days earlier, after leaving BooKoo Bounce, my daughter began to complain of stomach pains. It quickly escalated to her being unable/unwilling to stand or walk. I had never seen her act this way before. Sure, she can be dramatic at times, but this was different. I gathered our things, dropped the boys with a sitter and headed straight to the nearest hospital. I was convinced she was injured at the bounce house and was bleeding internally or something (thank you, Grey’s Anatomy, for my overactive imagination). Truly, this was my scariest moment as a parent thus far. After a series of tests, the doctors concluded that she had low potassium, likely due to a recent stomach bug. The treatment was basically to eat more avocados and bananas. And of course follow up with her pediatrician.

All seemed fine the next day, and I thought, “Whew, thank God that was such an easy fix. It seemed so much worse than just abdominal cramps.” The day after that was a different story. She started complaining of stomach pains again. I gave her some Tylenol to help, thinking we knew what the problem was. Several hours later, she continued to complain about her stomach. As the evening went on, she seemed to be getting worse. We thought perhaps she needed to use the bathroom, but my mommy gut was telling me otherwise.

I kept telling my husband and sister-in-law, “I cannot imagine cramps this bad from low potassium. She is reminding me of how I acted when I had gallstones, or when I was in labor.” Still, I ignored my feelings. After all, I am not a doctor, and we were just at the ER. I cannot imagine going back for this again. Plus, my husband was sure it was just from her potassium levels being low. They did tell us it may take a few days for things to get back to normal. I certainly didn’t want to spend the evening at the hospital for nothing. But I couldn’t just leave her in pain like that, either. The internal battle in my head for what to do went on and on. It took her vomiting due to the pain for me to finally give in and take her back. This time, we went to Children’s. And I am so thankful I did. 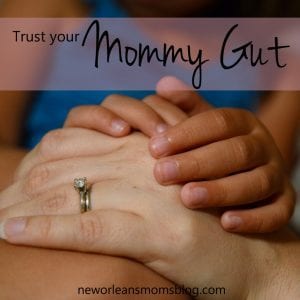 I cannot say enough good things about the staff and the quality of care at Children’s. Everyone we came in contact with was simply amazing. After the doctor showed me the X-ray, he assured me that we would figure this out. I so appreciate being kept in the loop, and I commend the doctor for being up front and saying, “I do not know what this is yet.”

After more tests, it was determined that my daughter has multiple kidney stones. While this is pretty rare in children, I understand it is on the rise. Also, she has an underlying kidney condition which was not troublesome before, but is likely a contributing factor. Once we see a specialist, we will know more on how to proceed.

This is not something I would normally blog about, but I had to share because I know so many of you feel like me. You think something is wrong, but you do not want to take them to the hospital for nothing. You do not want to spend the money and time, and you certainly do not want have your child poked and prodded all to be told, “This is nothing. Go home.” You second guess that little voice inside. Maybe you’ve been wrong before? Maybe, like in my case, the hospital staff was wrong.

Thankfully, my daughter’s issue wasn’t life threatening, but who’s to say it won’t be some day? What if me doubting myself caused her further damage? I know it caused her additional pain, and that breaks my heart. Moving forward, I will always trust my mommy gut. It is there for a reason.

Why Three “3 and Under” Sucks and Why it’s Awesome